Shortly after Israeli forces took control of Arab cities in 1948, their residents were concentrated in separate neighborhoods, usually fenced in with barbed wire. For some Israeli officials, this conjured up “associations of horrors.” 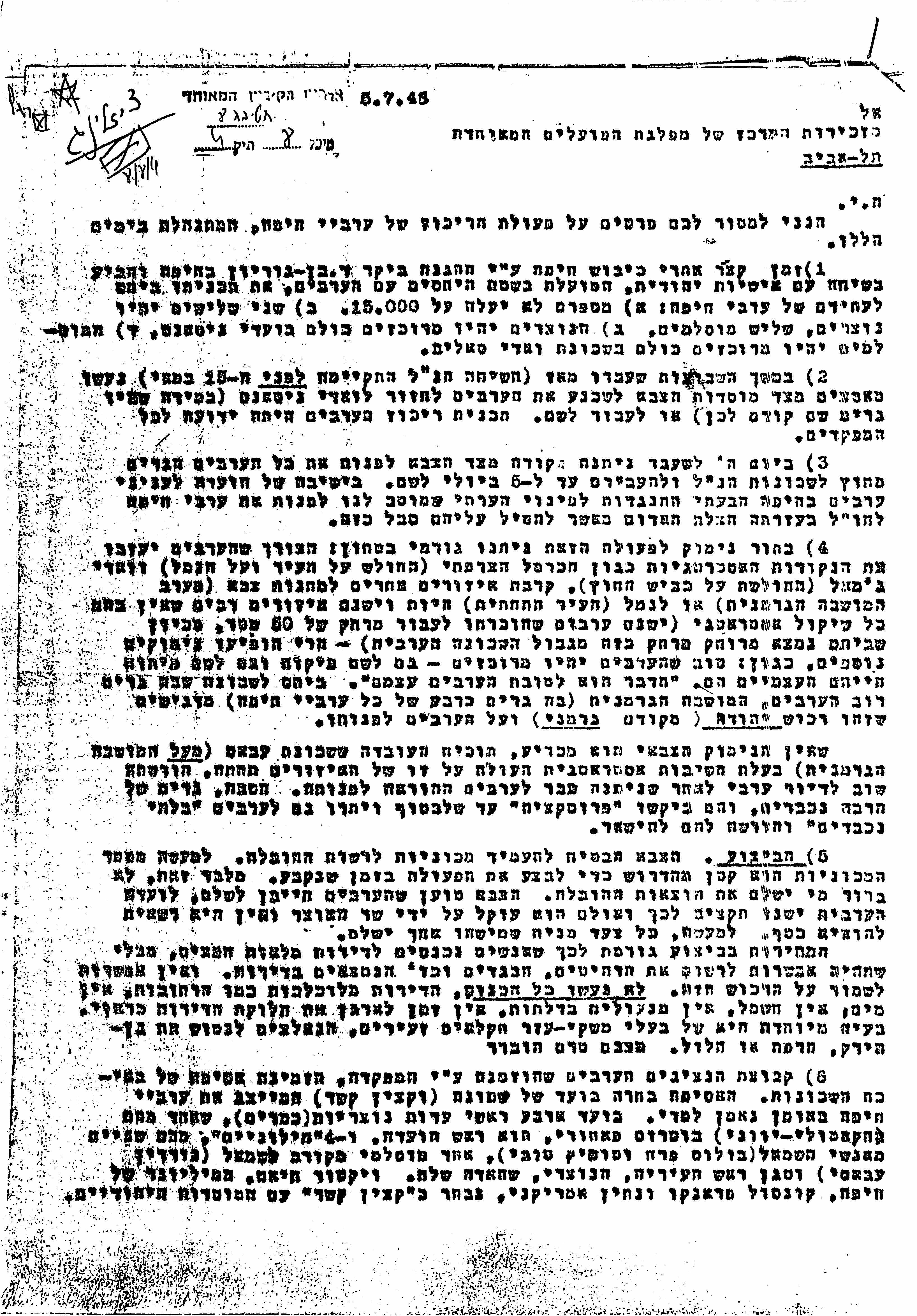 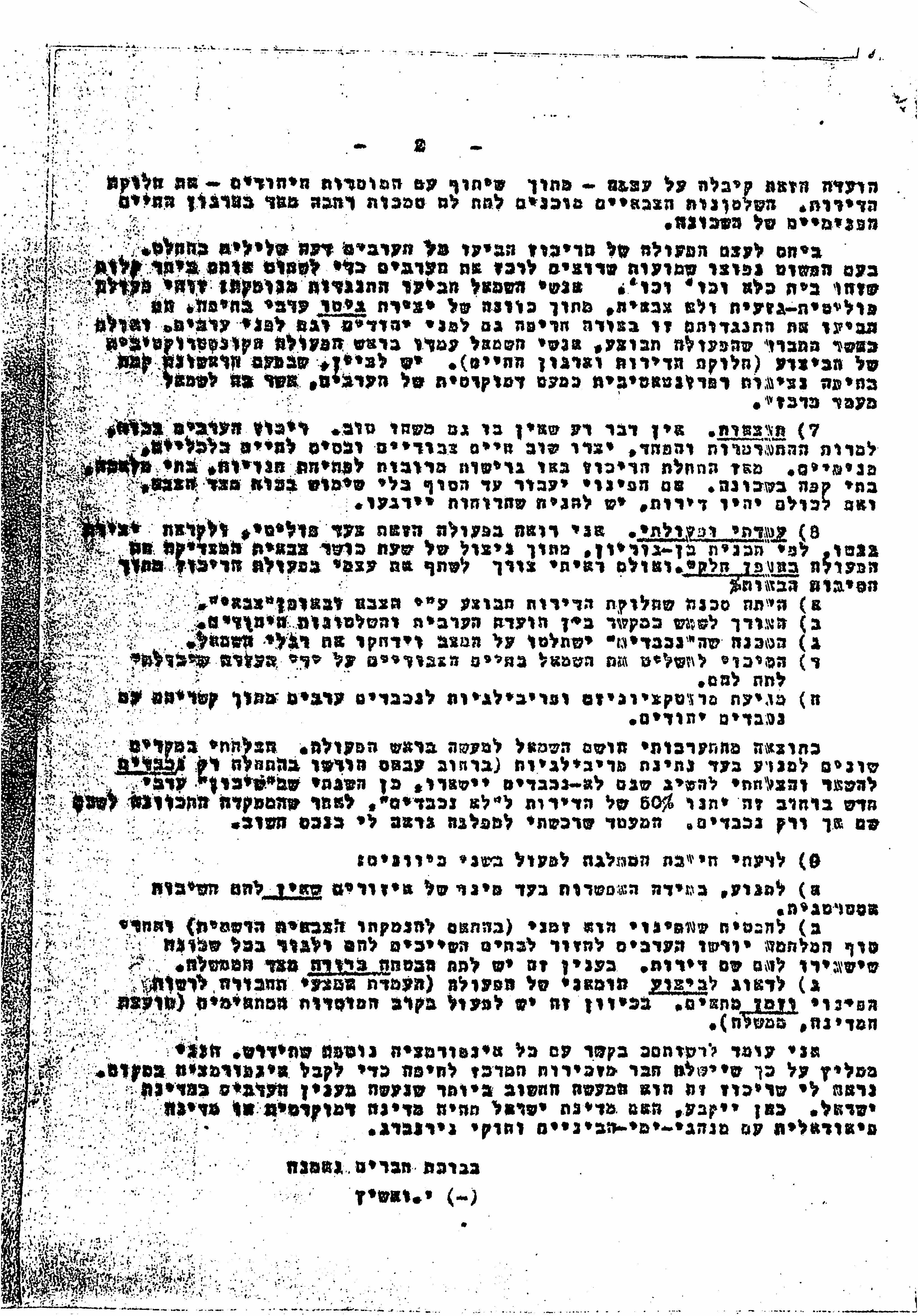 Yosef Waschitz (1910-1992) was the head of Mapam’s Arab department. On July 5, 1948, a little over a month after the occupation of Arab Haifa, Waschitz sent the letter posted here to his party’s central committee, which was closely following events in the Arab public.

Waschitz described the “concentration” of Haifa Arabs underway at the time. According to Waschitz, in a meeting held in the city, Prime Minister David Ben-Gurion detailed his plans for Arab residents of the city. Their number should not exceed 15,000, two-thirds Christians and one-third Muslims. The Christians would be concentrated in Wadi Nisnas and the Muslims in Wadi Salib. Waschitz wrote that an order had been issued to remove all Arabs living outside the two neighborhoods allocated for them out of their homes. The concentration of Arabs was designed to achieve two goals: First, keeping them far from strategic sites in the city, and second, “monitoring” them. He reported how the plan was carried out, noting the military claimed residents should foot the bill for their own displacement. The report indicates that the relocation of Arab residents to their new apartments was chaotic: “There was no preparation […] There is no water, no electricity, no locks on the doors”. Waschitz said concentrating Arabs in the two neighborhoods would create much suffering, which was why, in his opinion, it would have been better to remove them from Haifa altogether, for instance, abroad.

Like others, Waschitz thought the treatment of Haifa’s Arab population during the war would have a lasting impact on Israel’s relationship with its Arab residents. “This is where it will be decided,” Waschitz wrote, “whether Israel will be a democracy or a feudal state with customs from the dark ages and Nuremberg Laws.” 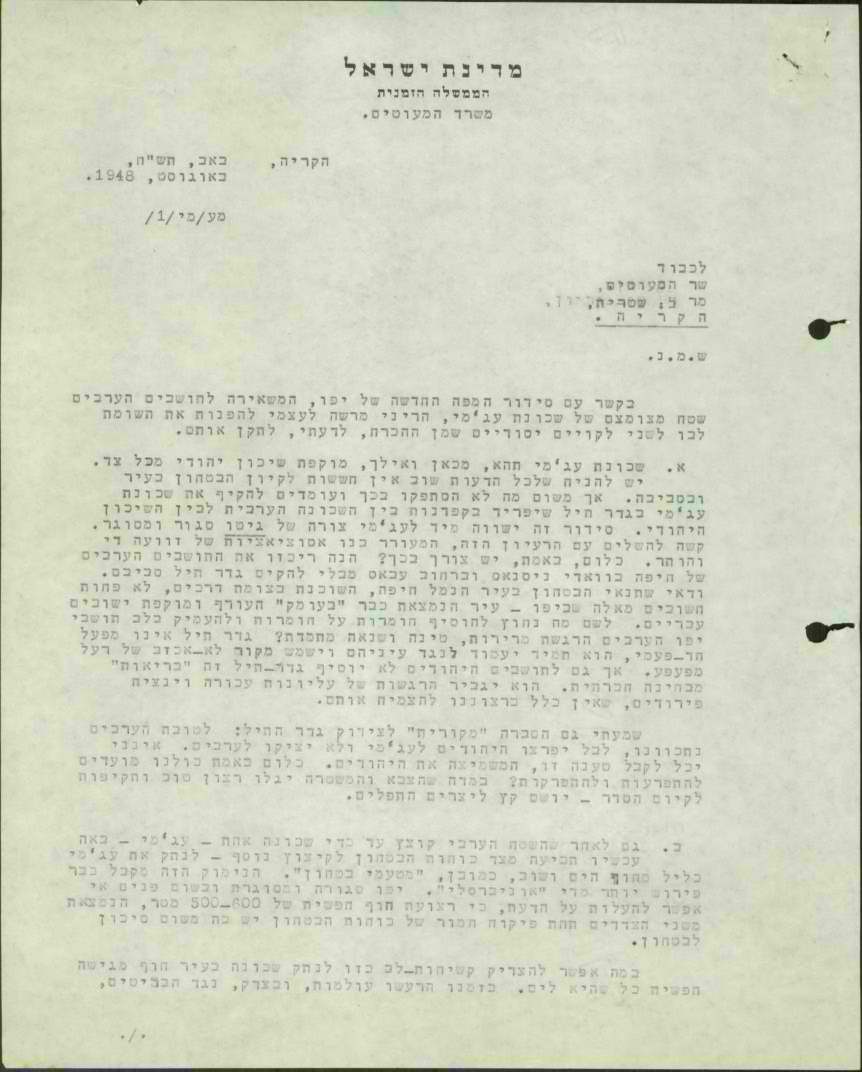 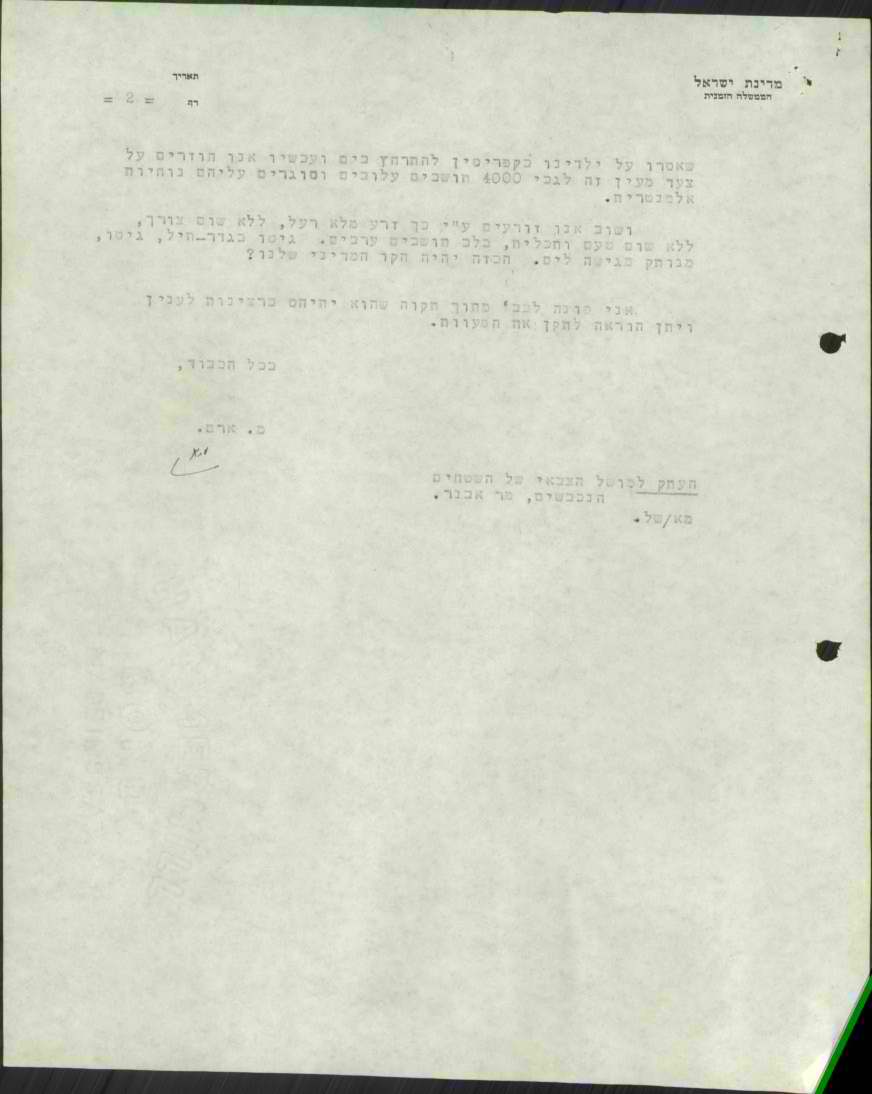 In a letter to the minister in charge of him, Moshe Erem, who directed the Rehabilitation and Promotion of Relations with Minorities Department in the Ministry for Minority Affairs (and was a member of the first Knesset on behalf of Mapam), protested the concentration of Arabs in Jaffa. Erem argued that contrary to arguments made by Israeli security personnel, the concentration of Arabs in the Ajami neighborhood, which is surrounded on all sides by Jewish neighborhoods, lacks any military logic. “… There is a consensus that there are no more concerns with respect to security in the city and its environs. However, for some reason, this was not enough, and the Ajami neighborhood is about to be fenced in with barbed wire that would strictly separate the Arab neighborhood from the Jewish housing projects. This will immediately give Ajami the form of a sealed ghetto”, Erem wrote. “It is difficult to accept this notion, which amply evokes associations of horrors for us.” In the letter, Erem addressed a particularly original explanation for the fence: It was meant to protect the Arabs, not the Jews, “so Jews do not storm ‘Ajami.” Erem was horrified by this argument: “Are we really all prone to rioting and falling apart?” He asked. Erem demanded the military and the police take resolute action against any such occurrence, thus “putting an end to dark impulses.” Like others, he wondered what the policy of closure and separation might mean: “Is this to be our policy program?”, he asked. 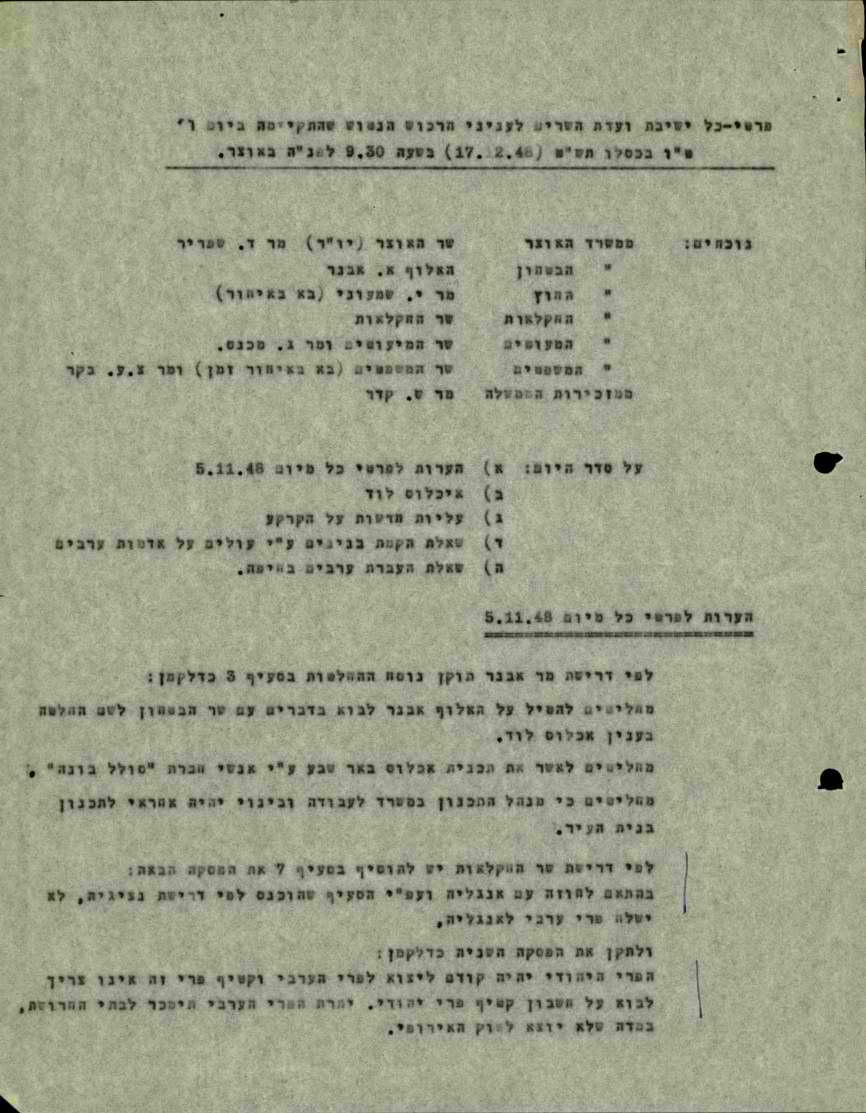 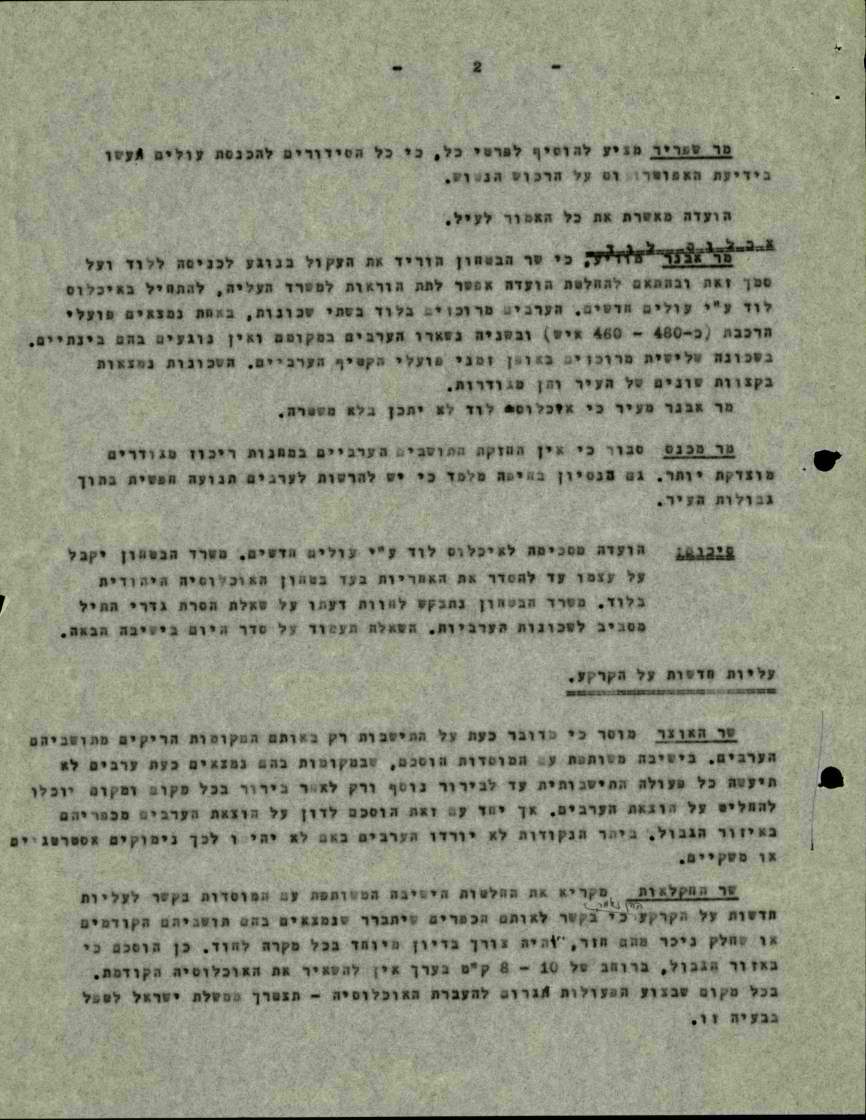 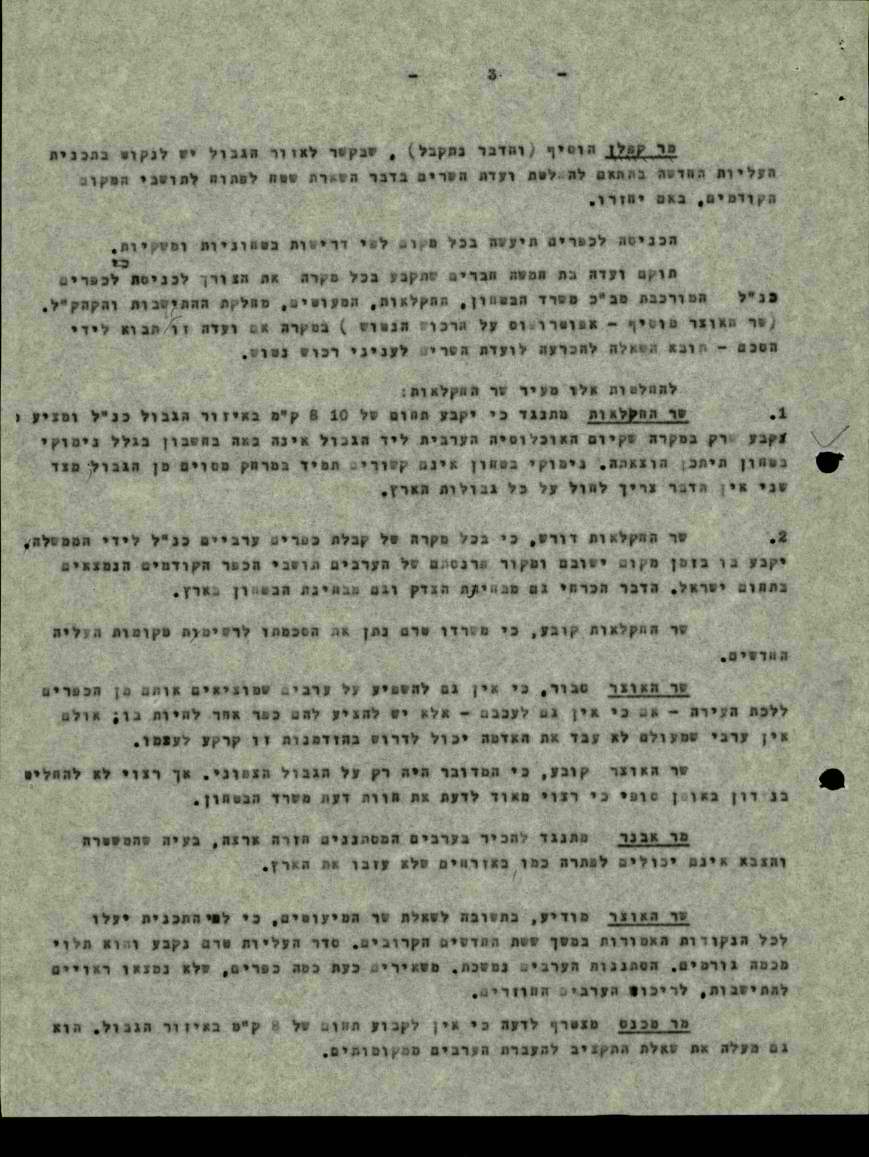 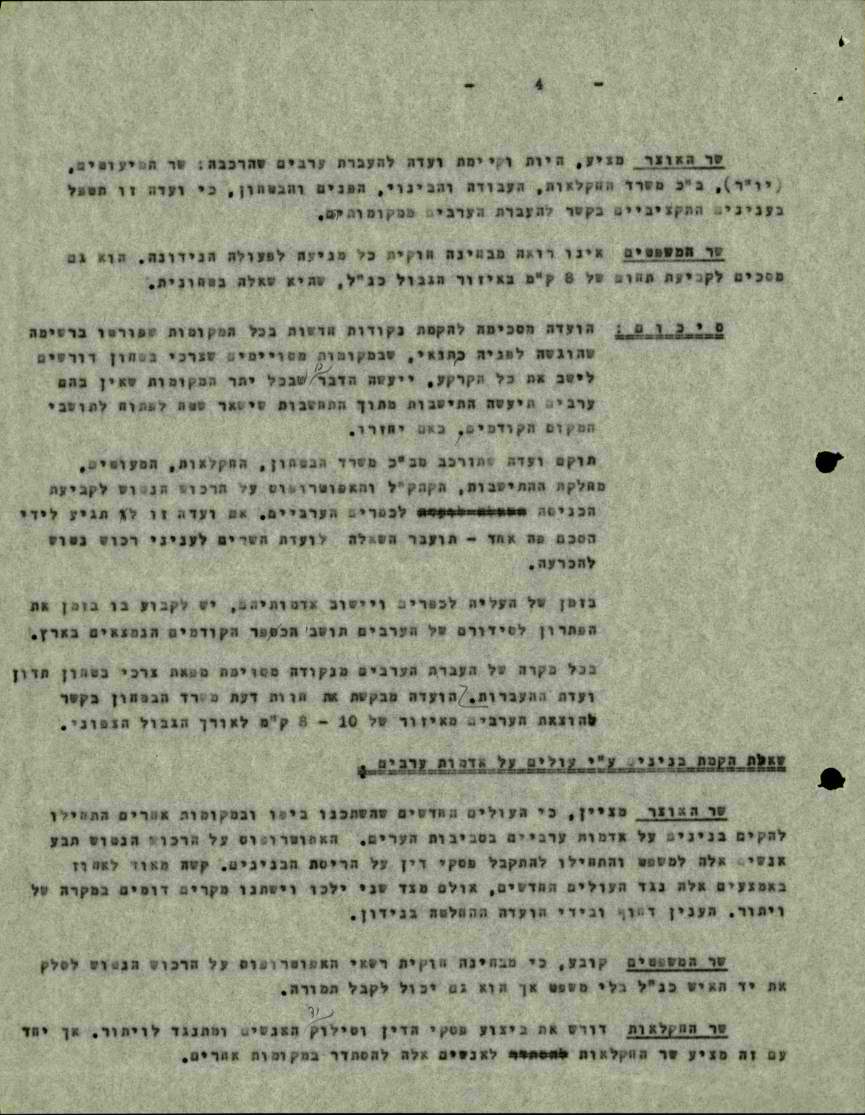 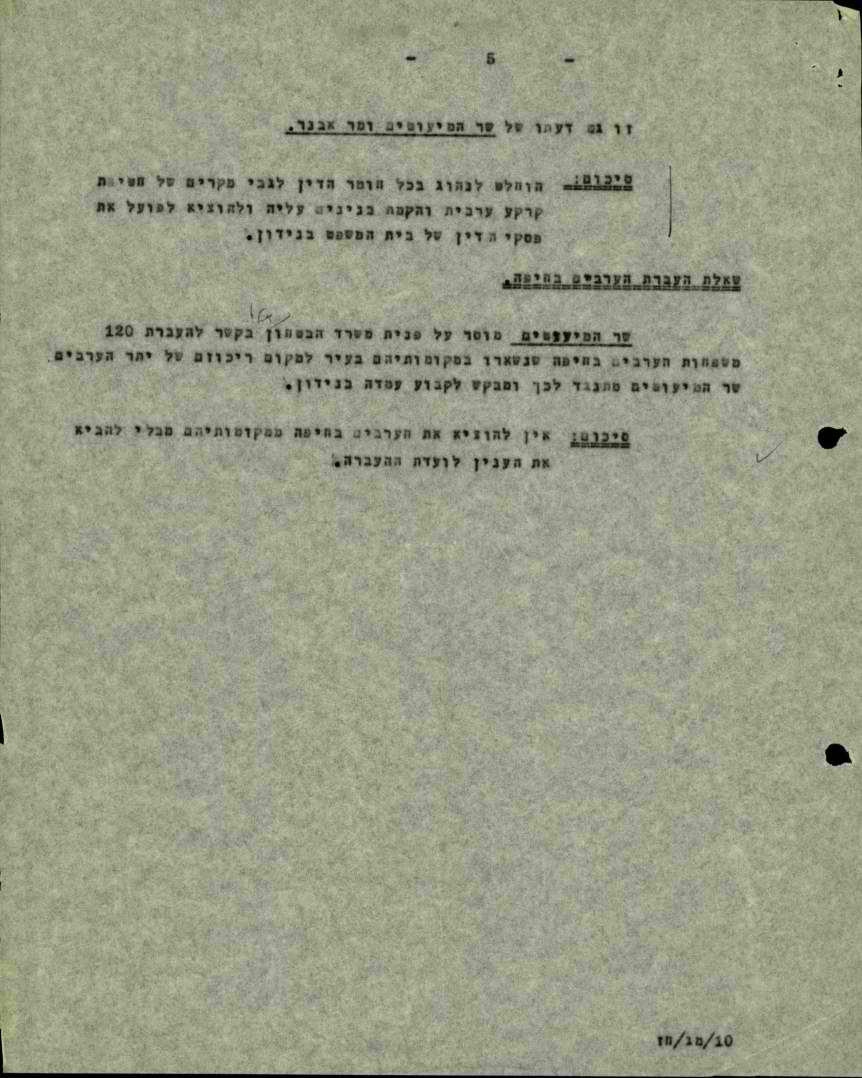 The Ministerial Committee for Abandoned Property began working in mid-1948, about six months before the meeting recorded in these transcripts. Five ministers, or their delegates, sat on this committee, which discussed various issues related to Arab property left in the country: chattel, orchards, fields, structures and more.  One of the topics the committee covered was the settlement of Jews, mostly new immigrants, in places where Arabs lived until the war. The statements made by Director of the Ministry for Minority Affairs Gad Machnes, “keeping the Arab residents in fenced concentration camps is no longer justified”, which are presented here, were recently redacted by the Israel State Archives. Machnes made this statement during discussions about moving newly arrived Jews into Lod. The few Arabs who remained in the city were concentrated in two neighborhoods that were fenced in with barbed wire. 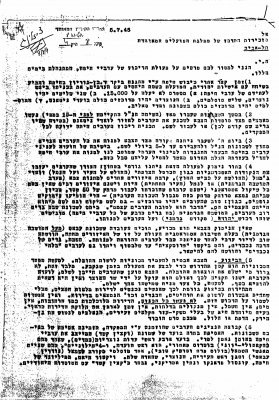 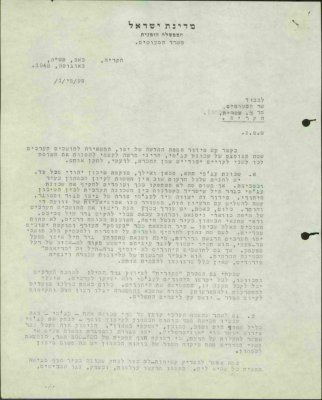 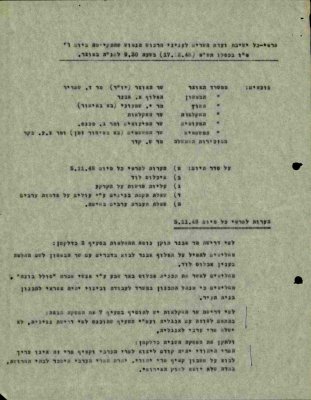