Mixed Cities: A history of segregation and inequality

The term “mixed cities,” which has been making headlines recently, hides a varied history. Some cities were mixed before 1948, some became mixed immediately after the war, and others have been becoming increasingly mixed due to long lasting socio-demographic trends. A brief overview of what happened in these cities – together with a number of archival documents – can help explain the varying intensities of the tensions that have erupted in the past week. 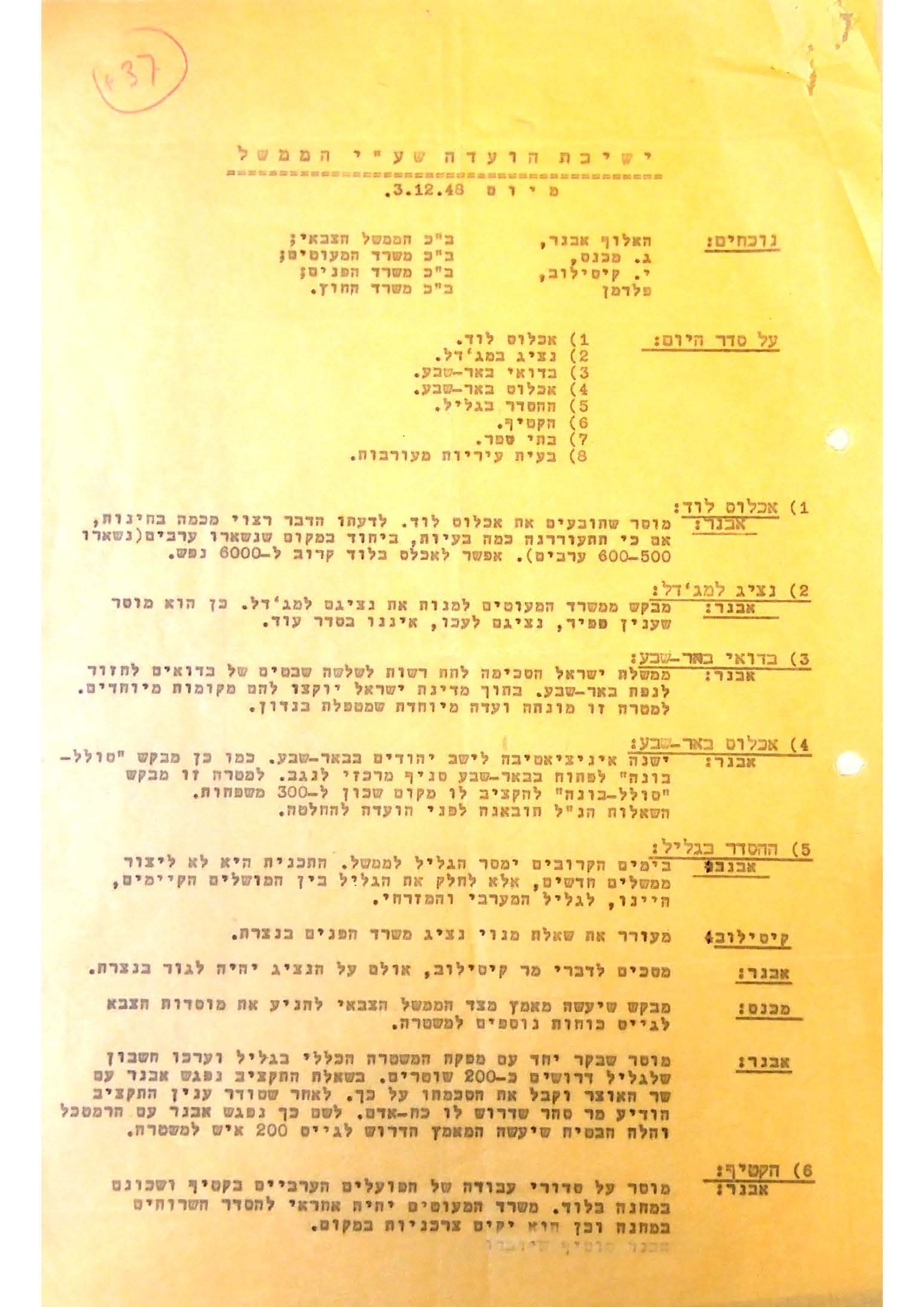 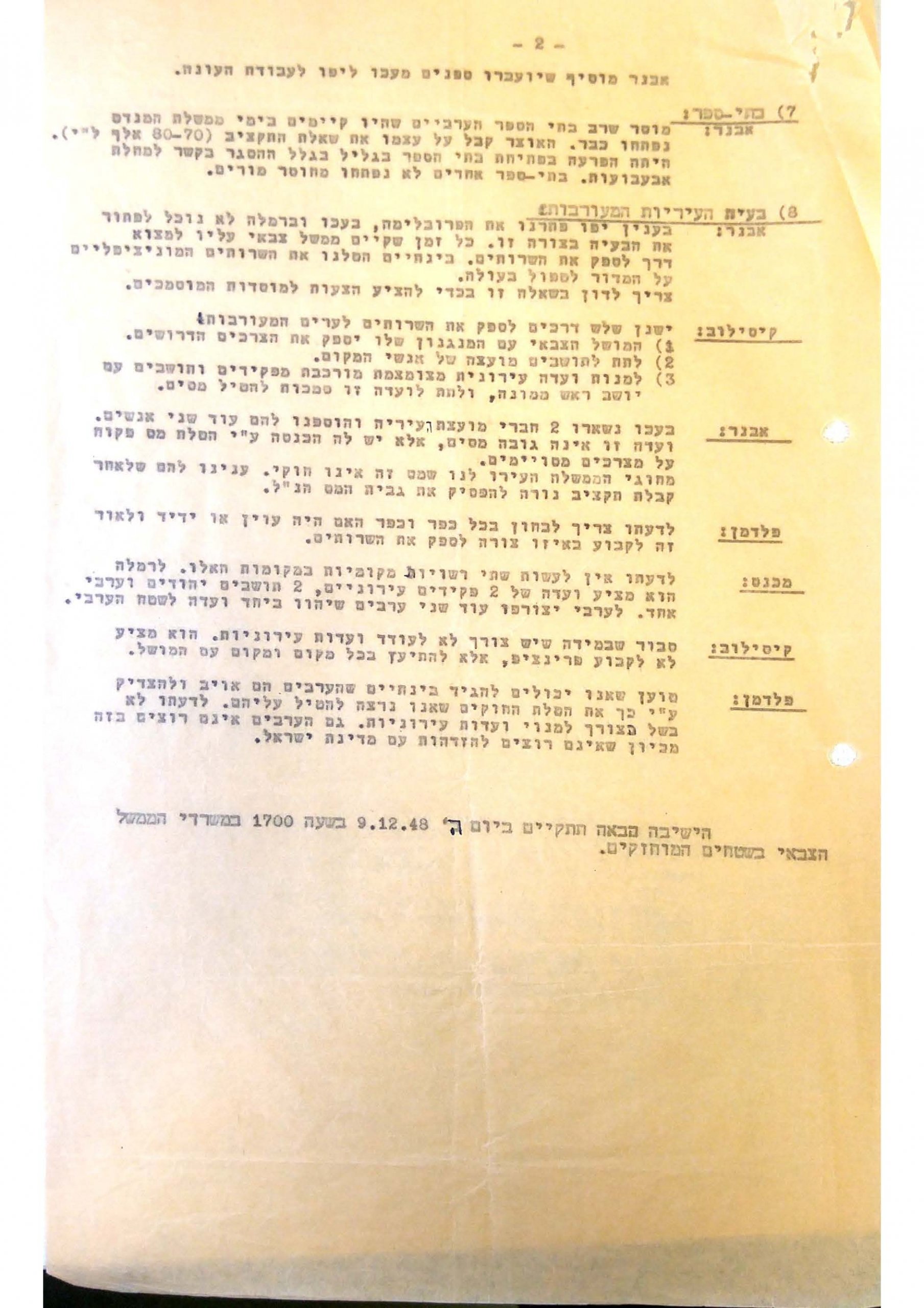 After Ramle and Lod were seized in July 1948, only about 1,000 Palestinian residents remained in them, the vast majority of them belonging to the poorest and most marginalized segments of society. After the war, Israel rapidly settled tens of thousands of newly arrived Jewish immigrants in the homes and neighborhoods left behind. Attempts by Palestinian residents to return to their homes in the cities were aggressively blocked by the Military Government. The few remaining Palestinian residents were joined, over time, by internally displaced Palestinians from the surrounding villages who had been stripped of land and property and moved to the city in search of sources of income. The decision to settle newly arrived Jewish immigrants in Lod was made while the fighting was still underway: Transcripts from a meeting of the Military Government Adjacent Committee posted here present a brief overview of the first steps towards settling new residents in the cities conquered and cleared out of Palestinians during the war. The first commander of the Military Government, Major General Avenr Elimelech pronounced: “Close to 6,000 people can be settled in Lod.” 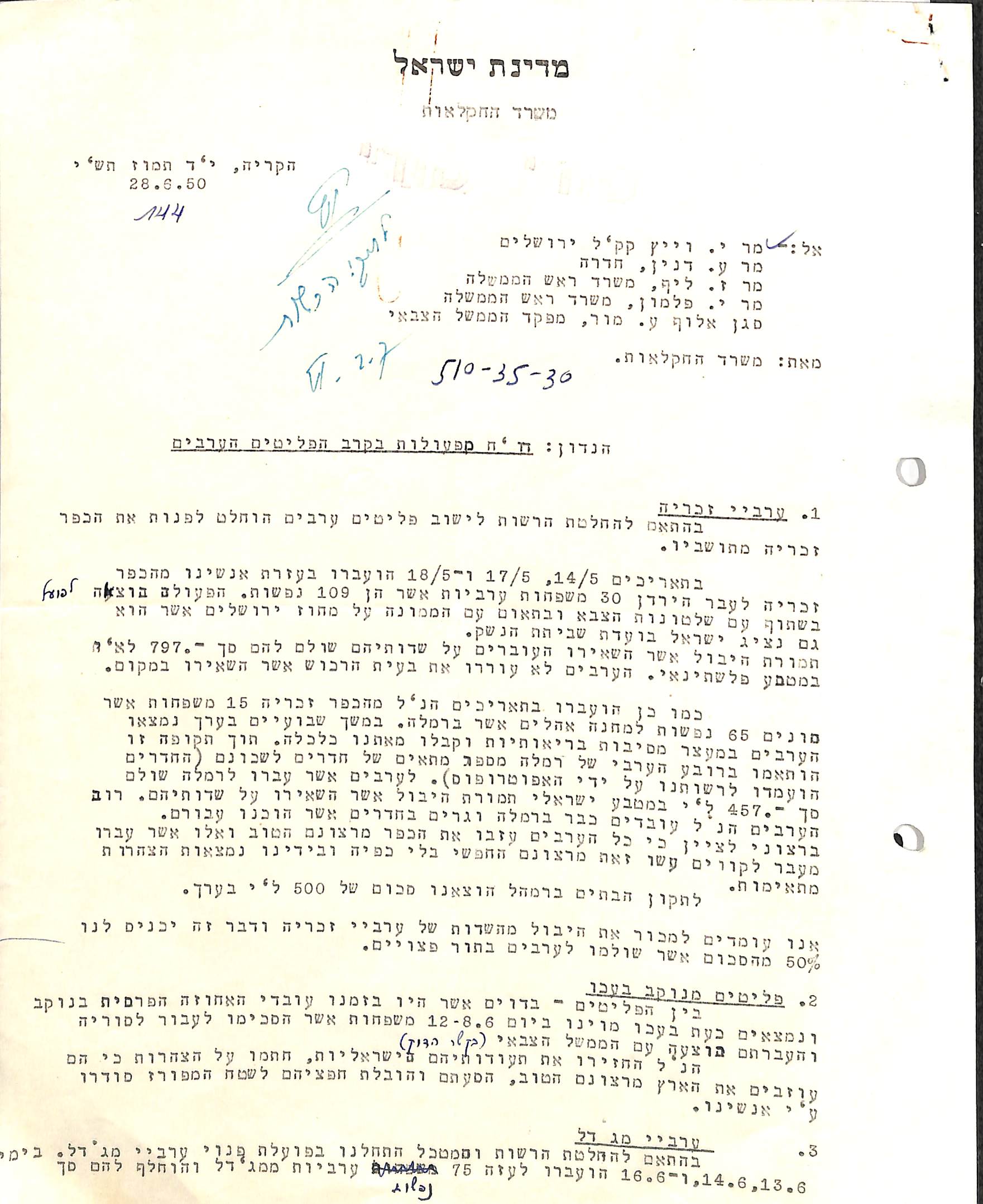 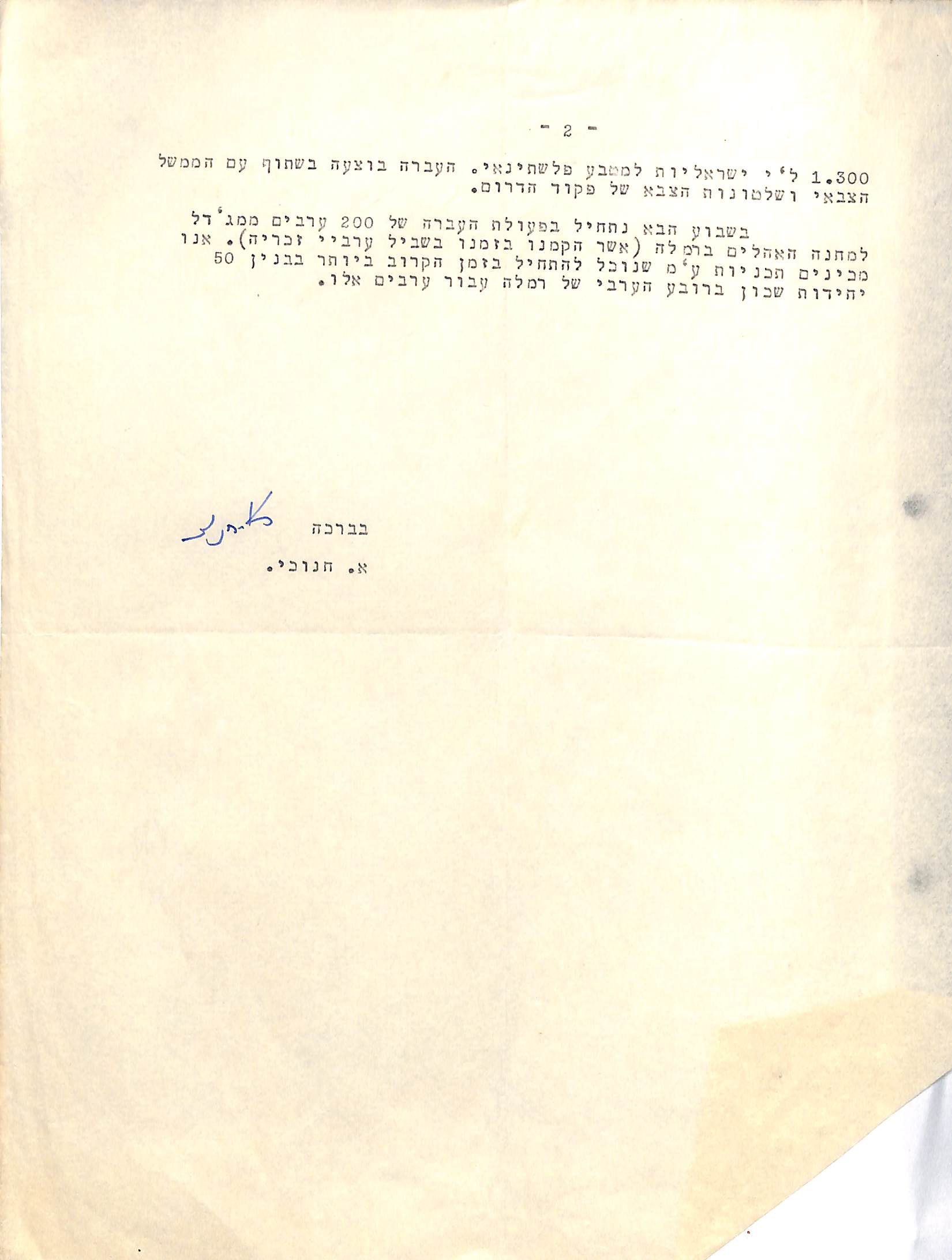 Report from activities among Arab Refugees

As the war ended and the Triangle area was annexed to Israel, about 156,000 Palestinians remained inside Israel – 25,000 of them were internally displaced, uprooted from their lands and stripped of all property. In the latter half of 1949, the government set up a committee to “formulate plans for the rehabilitation of Arab refugees.” The document posted here refers to decisions made by the Refugee Settlement Authority, which was established based on this committee several years later. One of the committee’s decisions was to expell all residents of the village of Zakkaryia, near Beit Shemesh. Some residents moved outside Israel entirely, while others were housed in a tent encampment in Ramle, and later in the homes of Palestinian residents who had been expelled from the city and left it. The city of Majdal was also cleared out of its residents, and as the document reports, some were transferred to Gaza, while another group would later be housed in Ramle. The same document also notes that refugees (referring to displaced Palestinians) from nearby villages also lived in Acre. They, too, had been “sorted,” as the document states, and some were moved to Syria. 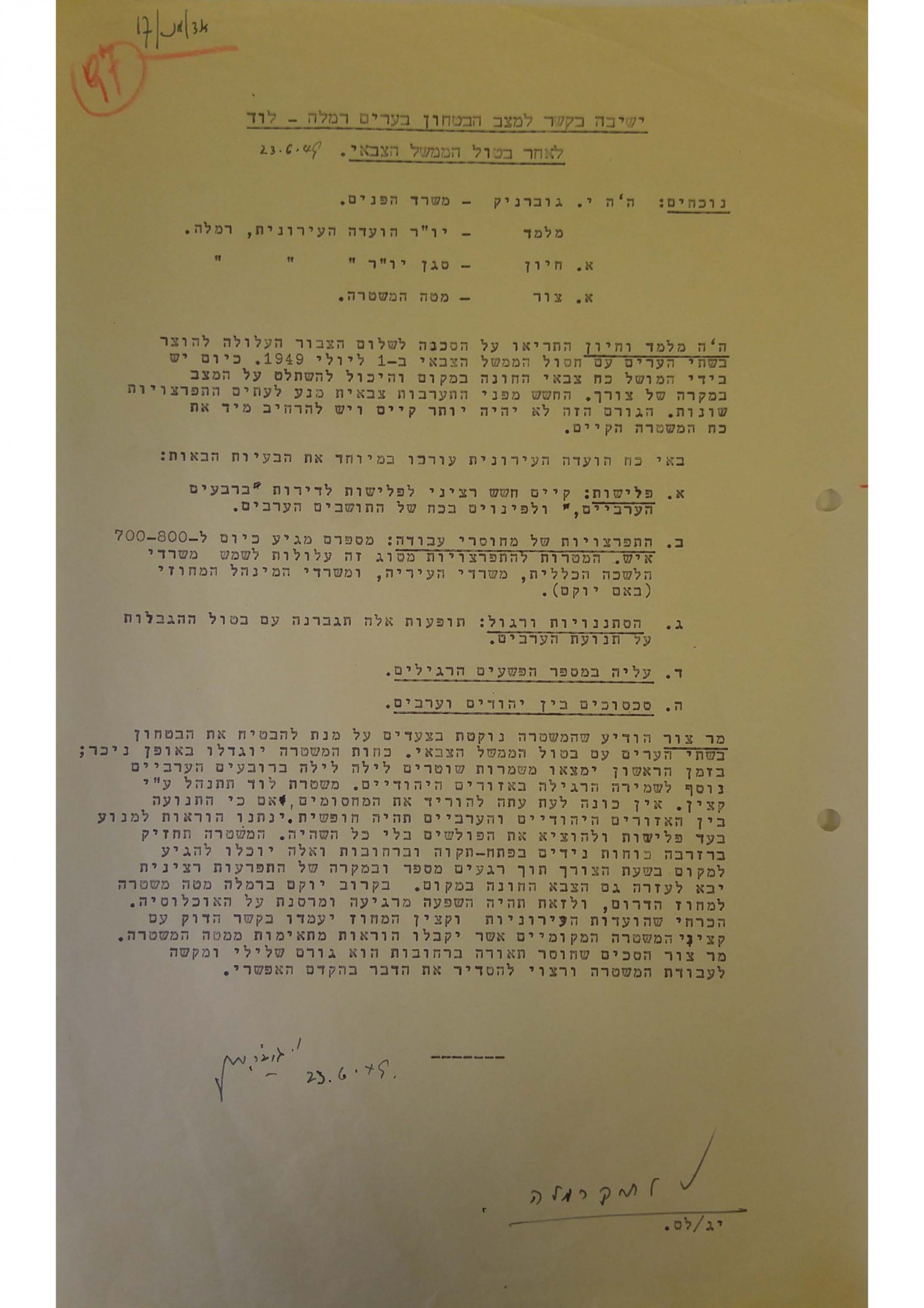 Meeting regarding security conditions in the cities Ramle-Lod

Jewish invasions of Palestinian homes began taking place in mixed cities where Jewish residents were settled during and after the war. Unlike the state-sanctioned assignment of Palestinian properties to Jewish citizens, carried out by the Custodian of Absentee property or his delegates, these were illegal, unsanctioned invasions by Jewish civilians into Palestinian properties whose original owners had either been internally displaced or became refugees. Some of these invasions were organized (for instance, by groups of discharged soldiers and war veterans with disabilities), while others were carried out by individuals acting alone. A speaker at a meeting held prior to the end of the Military Government in Ramle-Lod cautioned: “There is serious concern over invasions into apartments in ‘Arab quarters’ and forcible removals of Arab residents.” 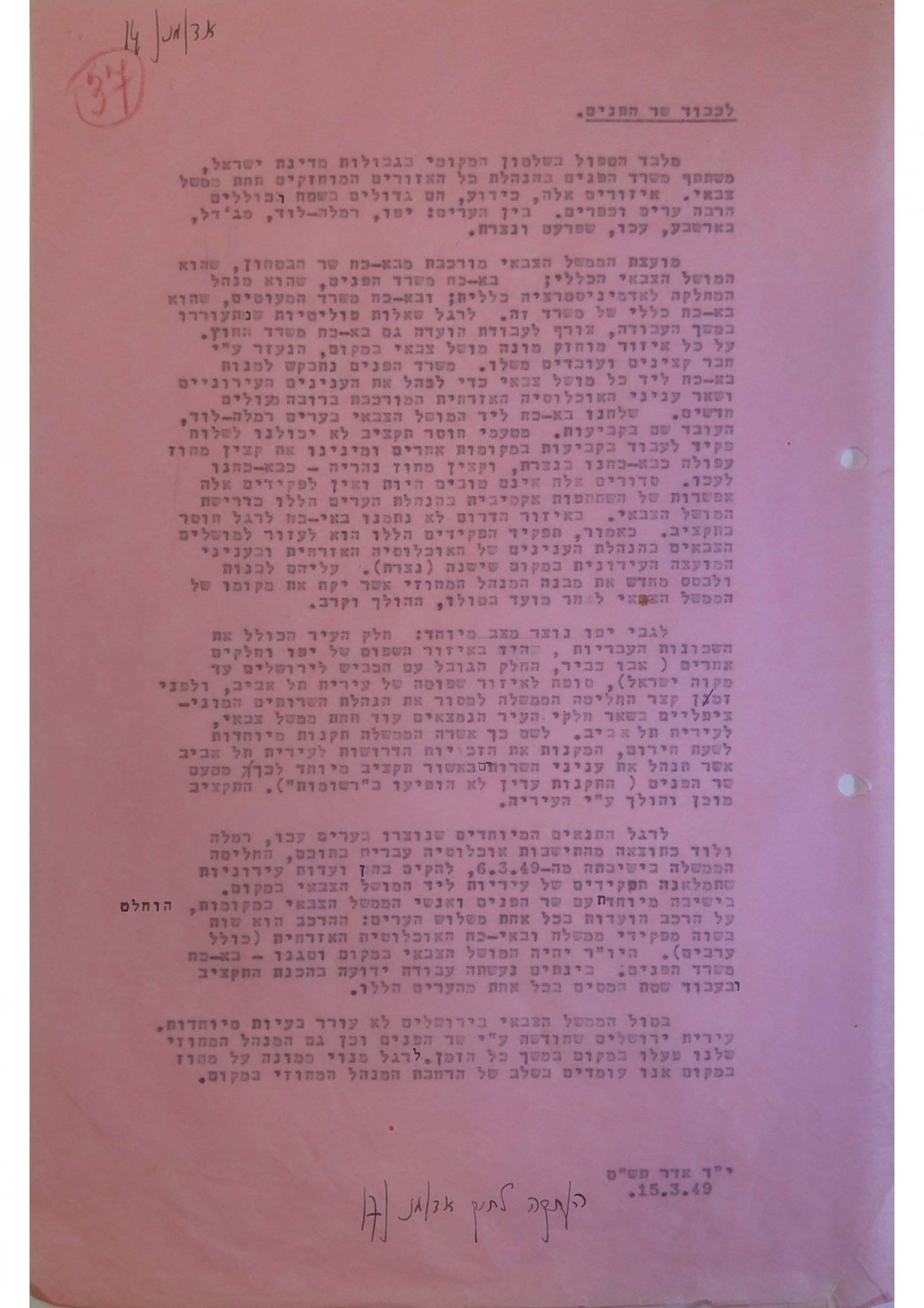 Overview of activities in cooperation with Military Governors

In September 1948, Prime Minister and Minister of Defense David Ben Gurion announced the establishment of a military government in the held territories (the term refers to all territories designated for the Arab state under the UN partition plan that had been seized during the war). In the months that followed, additional areas with concentrations of Palestinian citizens were put under the Military Rule. These areas were assigned Military Governors to run the affairs of the Military Government, with attachés from the Ministry of Minority Affairs and the Ministry of Interior, who were charged with overseeing routine civilian matters. This system was put in place in Jaffa, Lod, Ramle, Nazareth, and Acre (but not in Haifa). As the document posted here indicates, by March 1949, “special conditions” had been created in Acre, Ramle and Lod, “as a result of the Hebrew population settling in their midst.” Consequently, the government decided to set up city-specific committees as a preliminary step towards the abolition of the Military Government. The Military Government in these cities was ultimately ended in July of 1949. The remaining areas where Palestinians lived in Israel were kept under Military Rule for 17 more years until it was finally dismantled in 1966. 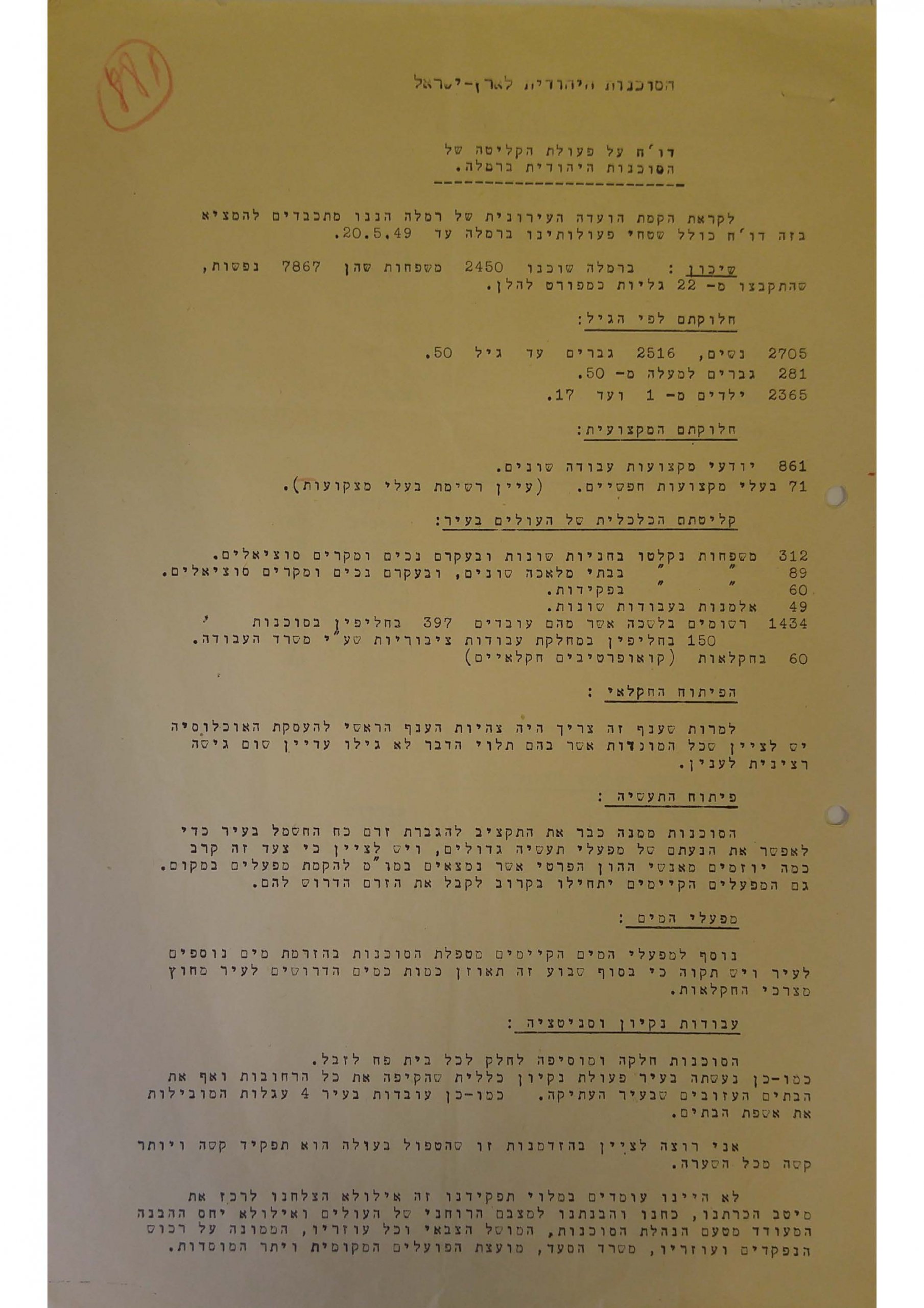 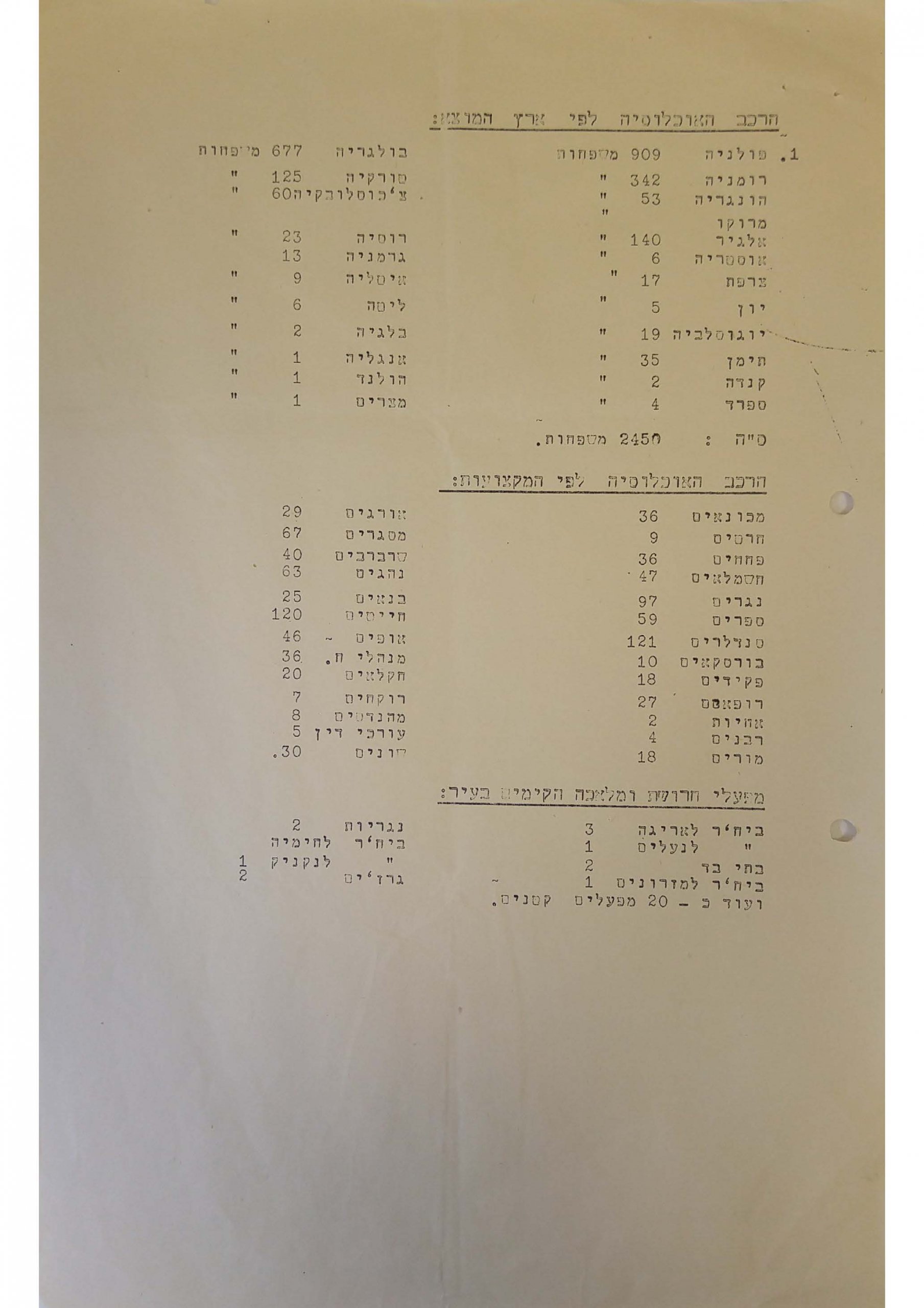 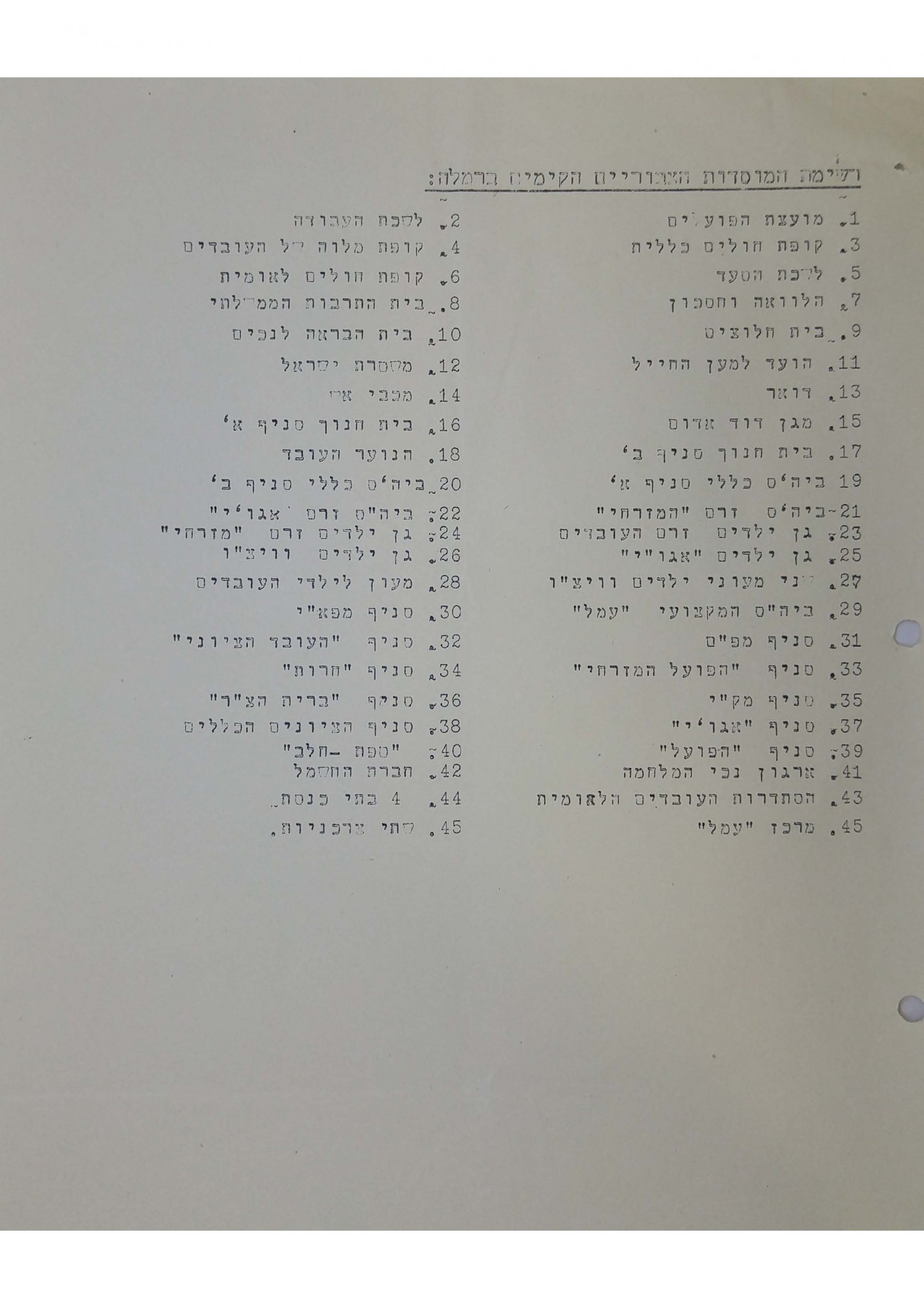 After the war, Israel rapidly settled tens of thousands of newly arrived Jewish immigrants in the homes and neighborhoods that Palestinians left behind. At the same time, the Military Government aggressively prevented Palestinian residents from returning to them. As a large enough Jewish population had been established in some of these cities, the possibility of ending the Military Government in Lod, Ramle, and Acre was discussed and eventually implemented in July 1949. Some two months prior to that, the Jewish Agency Department of Absorption prepared a concluding report about its work in the city, indicating that by May of 1949, Ramle had received 2,450 newly arrived Jewish families – a total of 7,878 people. To compare, after the war, only 1,000 Palestinian residents remained in Ramle and Lod combined. The report also indicates these new Jewish immigrants had arrived from no less than 22 different countries, that a third of them were children, and that time and effort would be needed in order for most of these families to be fully integrated into the city’s economy. 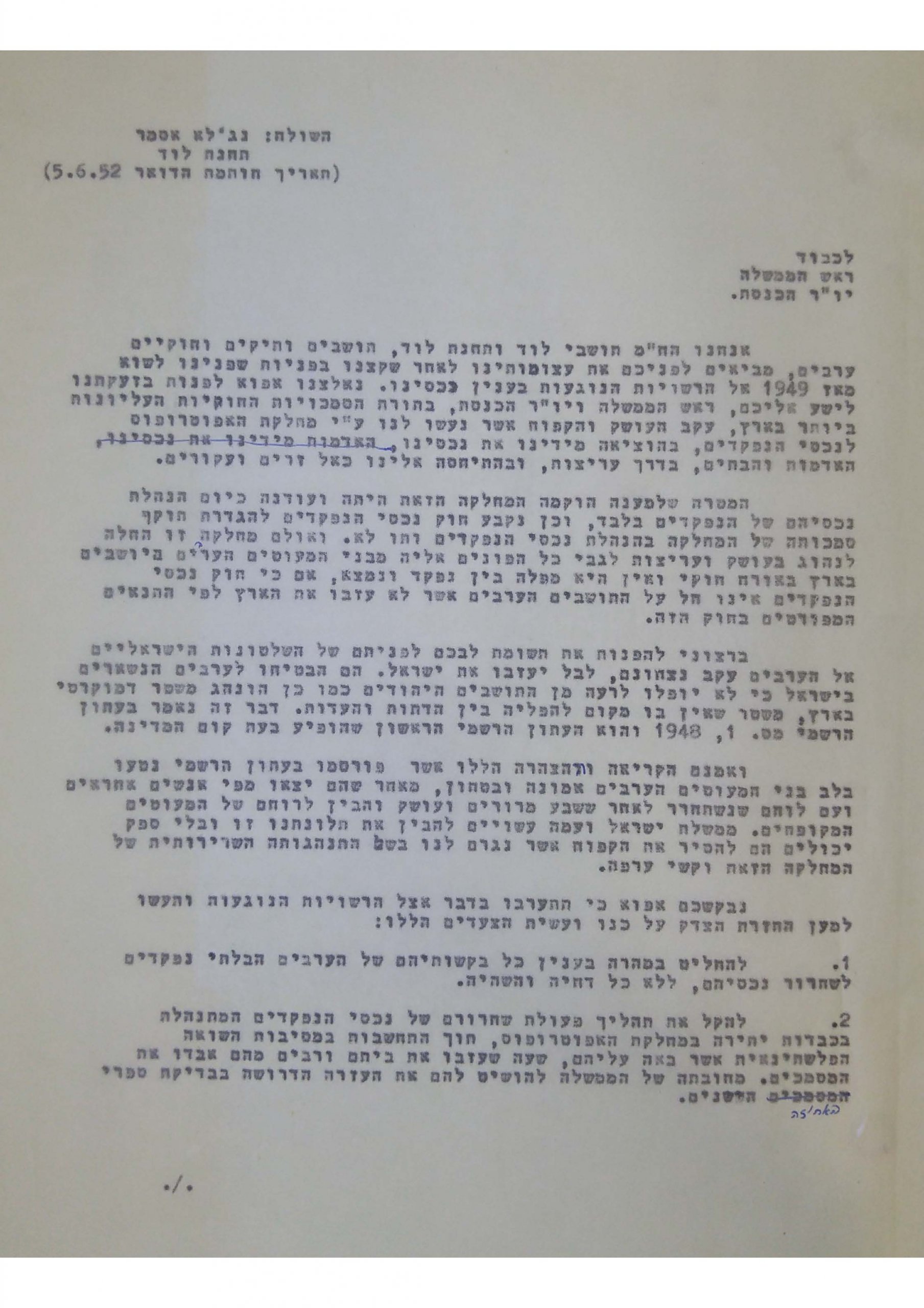 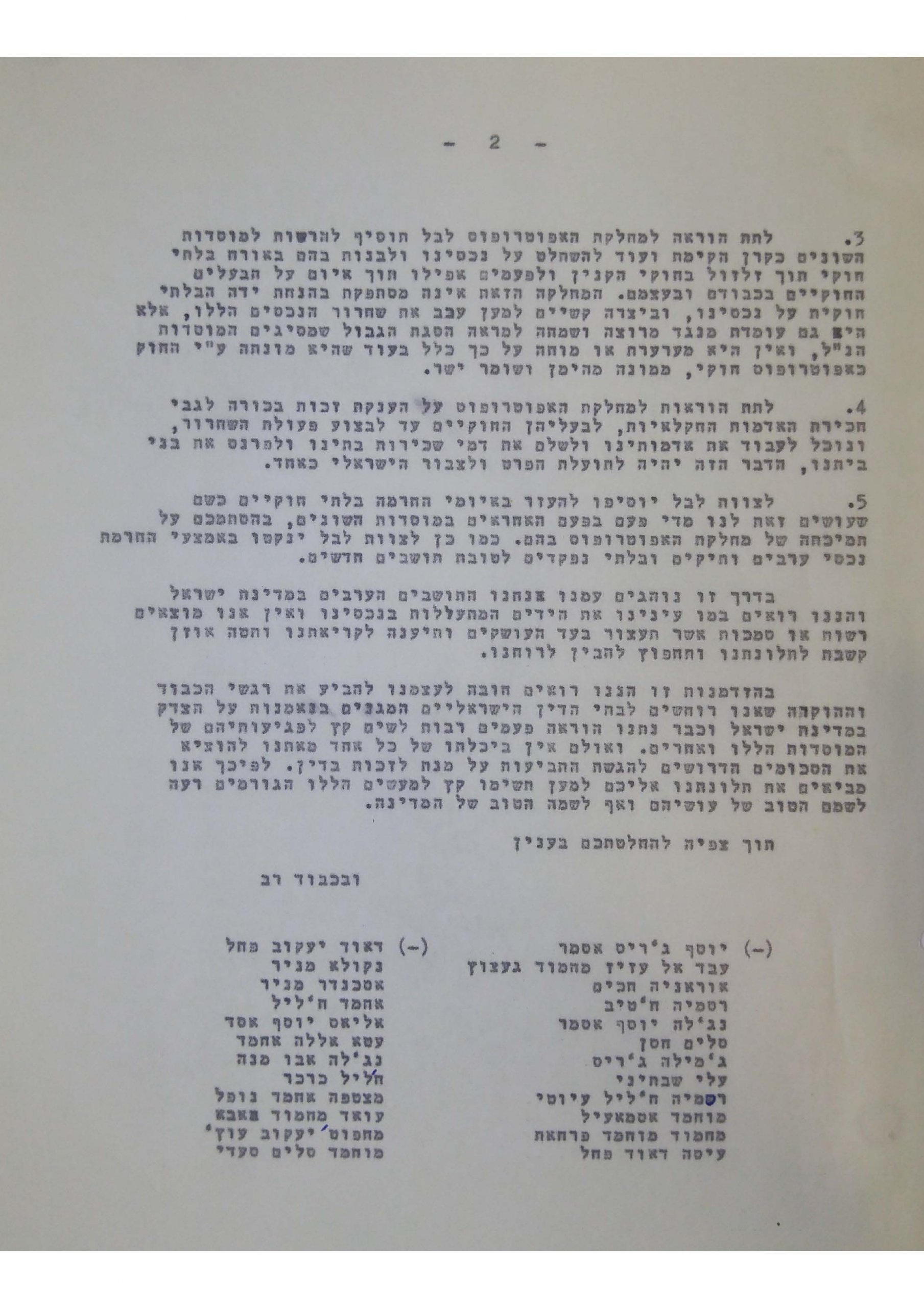 Letter from residents of Lod

When the War of Independence came to an end, about 1,000 Palestinian residents remained in Lod and Ramle combined. The tens of thousands of Palestinians who had resided in the cities before the war were expelled or fled months earlier. Soon, Israel began settling newly arrived Jewish immigrants in the emptied Palestinian cities, while taking over lands and buildings that belonged to local Palestinian residents who had become citizens of the newly established state. The letter posted here sheds light on the policies of exploitation and pilferage employed by various state authorities against Palestinian citizens living in Lod in the years following the war. The letter’s authors protest the expropriation of their properties, the lack of response their applications they filed to have their property released, and requests they made to lease land in the meantime in order to be able to make a living. They also request an end to the use of threats against them and to the transfer of their properties to new residents of the city. 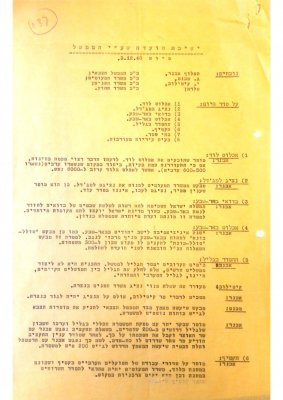 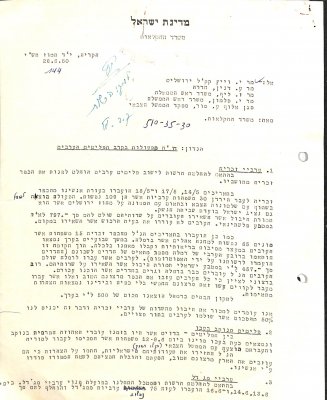 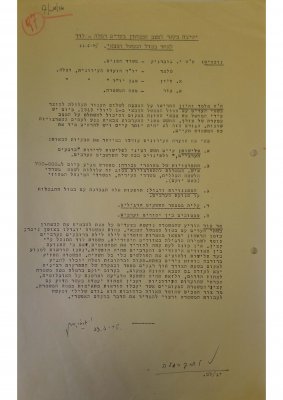 Meeting in preparation for the abolition of the Military Government in the cities Ramle-Lod
June 23, 1949 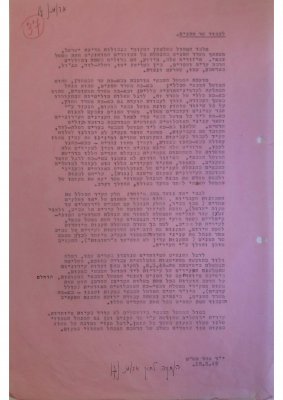 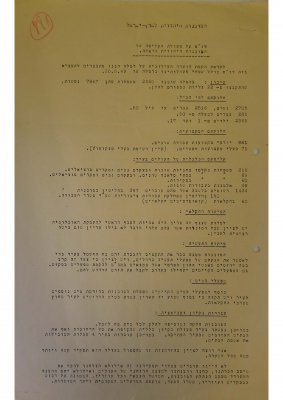 Report on Jewish Agency absorption action in Ramle
May 20, 1949 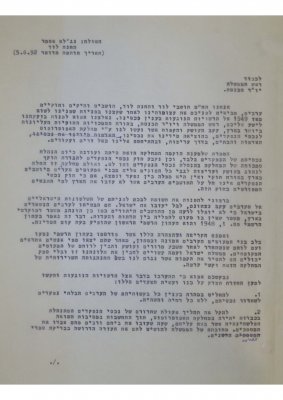