Under the Guise of Security

The settlement of – some would say return to – Gush Etzion (the Etzion bloc), which lies southwest of Jerusalem and Bethlehem, began immediately after the 1967 War. It ended a 19-year year hiatus in Jewish settlement in the area, which had Jewish communities until 1948 and was designated for the Arab state under the partition plan. In the battle for the area on May 13, 1948, nearly 250 Jewish fighters and civilians were killed. Gush Etzion now has 12 settlements. Like many others, they were initially built under the guise of security needs. 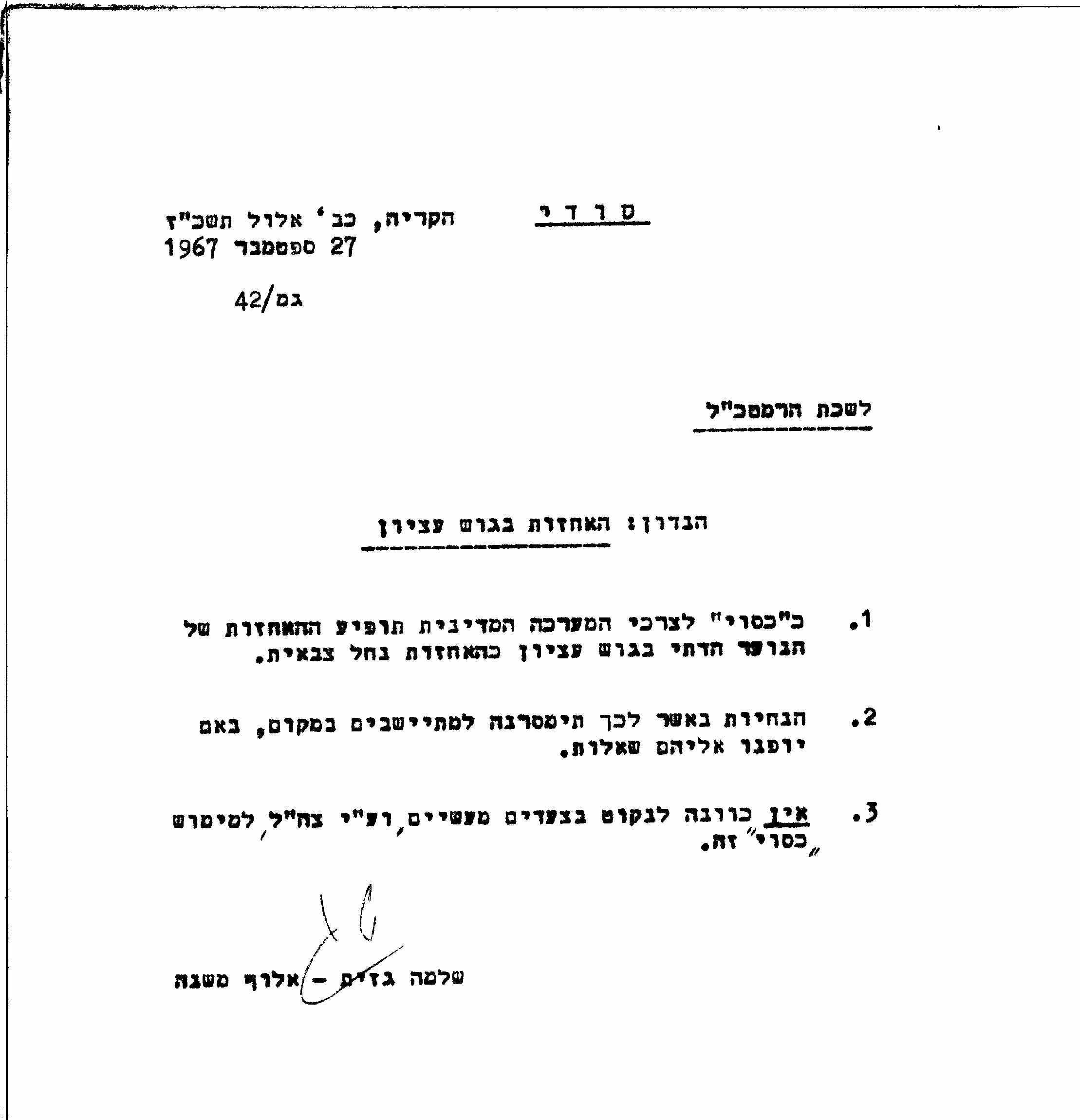 A letter from Colonel Shlomo Gazit, the Chair of the Policy-Security Coordination Committee in the Territories to Chief of Staff Yitzhak Rabin implies that Rabin was aware of the establishment of the “Religious Youth outpost in Gush Etzion” at the time. The new information Gazit gives the Chief of Staff in this letter relates to the cover for this development. “For purposes of the diplomatic battle”, Gazit writes, the settlement will be presented as a military outpost. To remove any doubt about the meaning of this military cover, Gazit expressly notes that the military will not take any practical steps towards implementing this cover 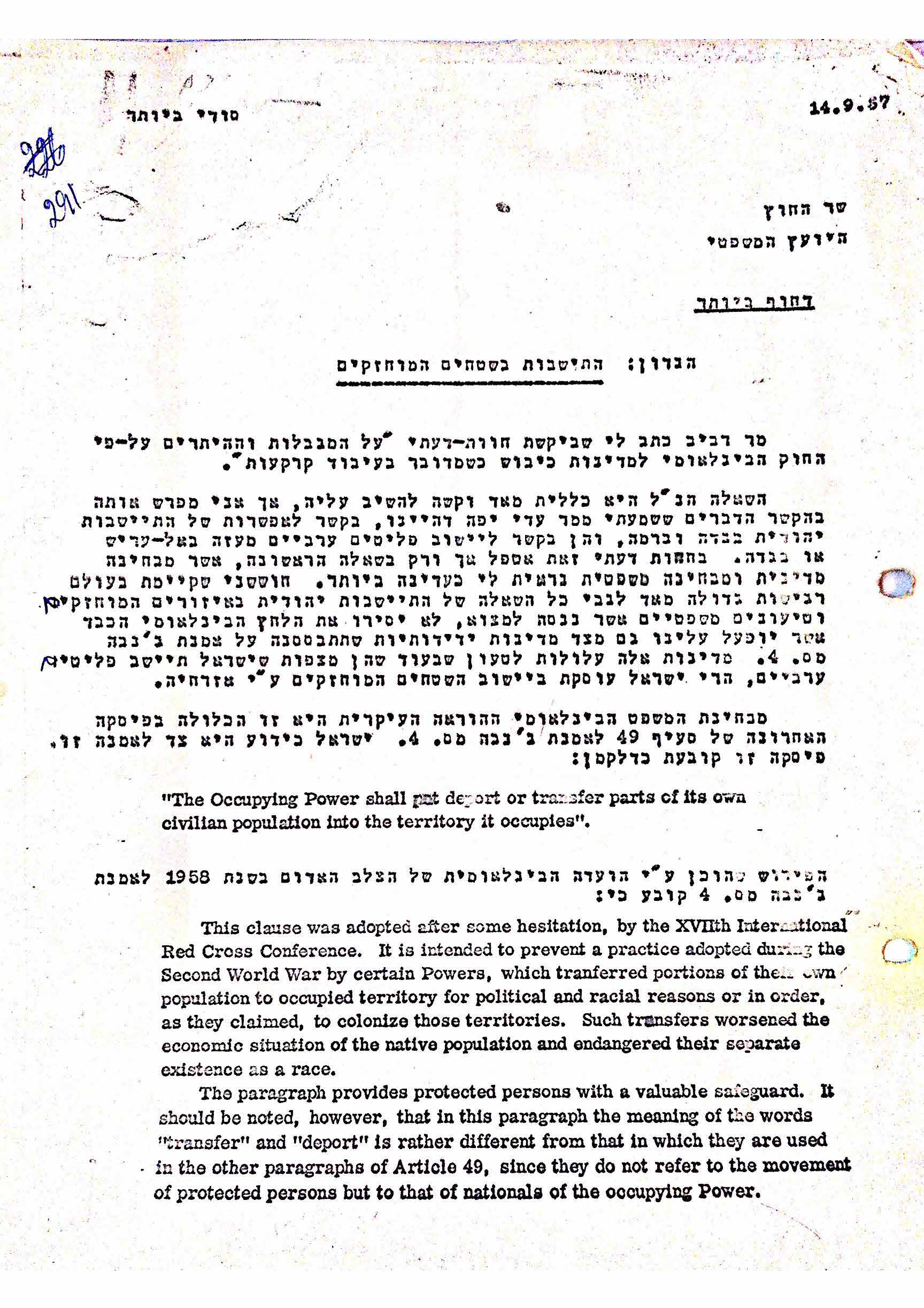 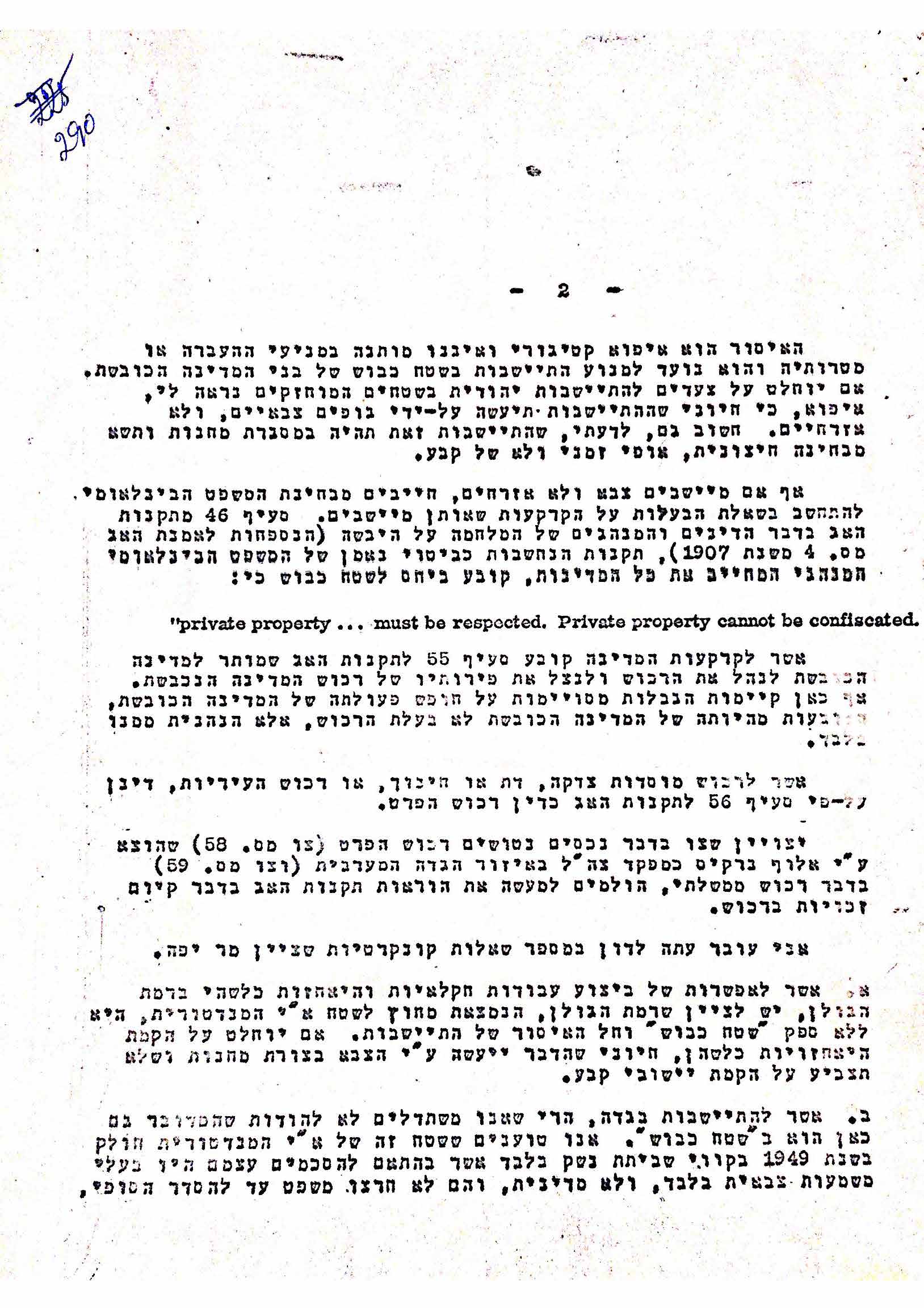 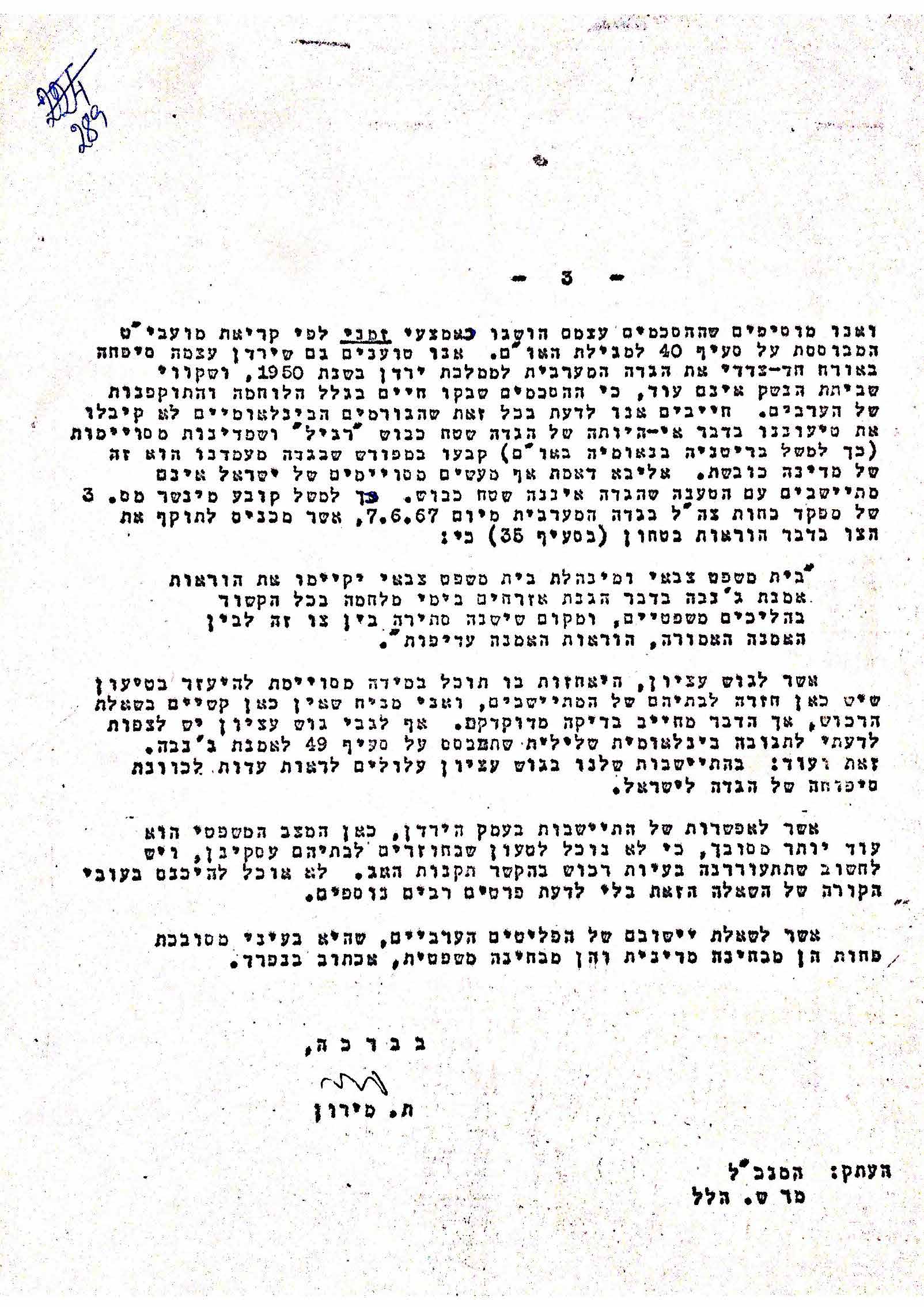 In his letter to the minister, Ministry of Foreign Affairs Legal Advisor Theodore Meron presents a detailed legal assessment on the issue of Israeli settlements in occupied territories in the West Bank and Golan Heights. This is one of the earliest memos on the legal feasibility of establishing settlements in the occupied territories written by government-appointed officials based on international law. The memo notes that Art. 49 of the Geneva Convention “categorically prohibits” an occupying power from settling its own civilian population in the territory it has occupied and lists the difficulties associated with using land and property in occupied territory. 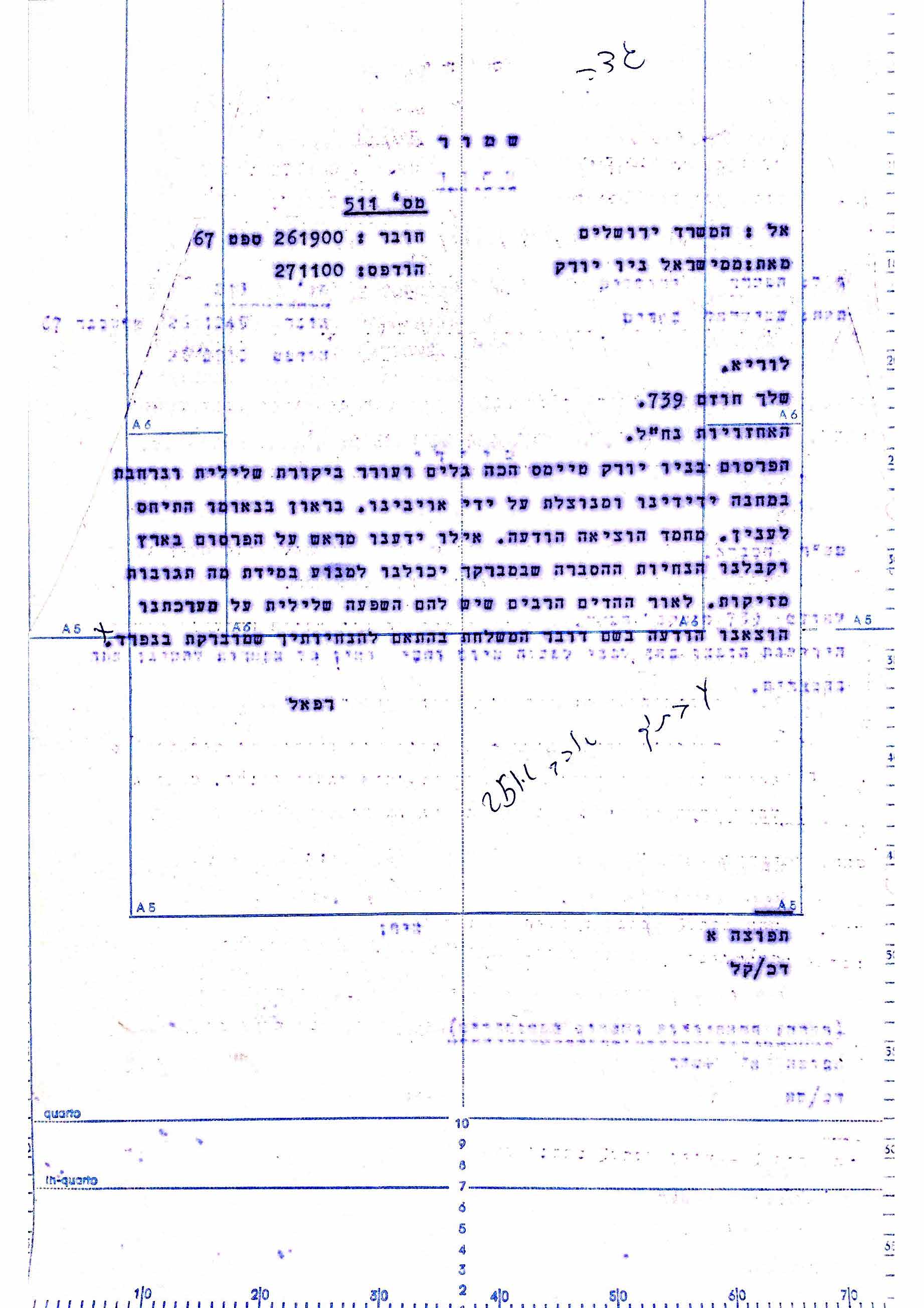 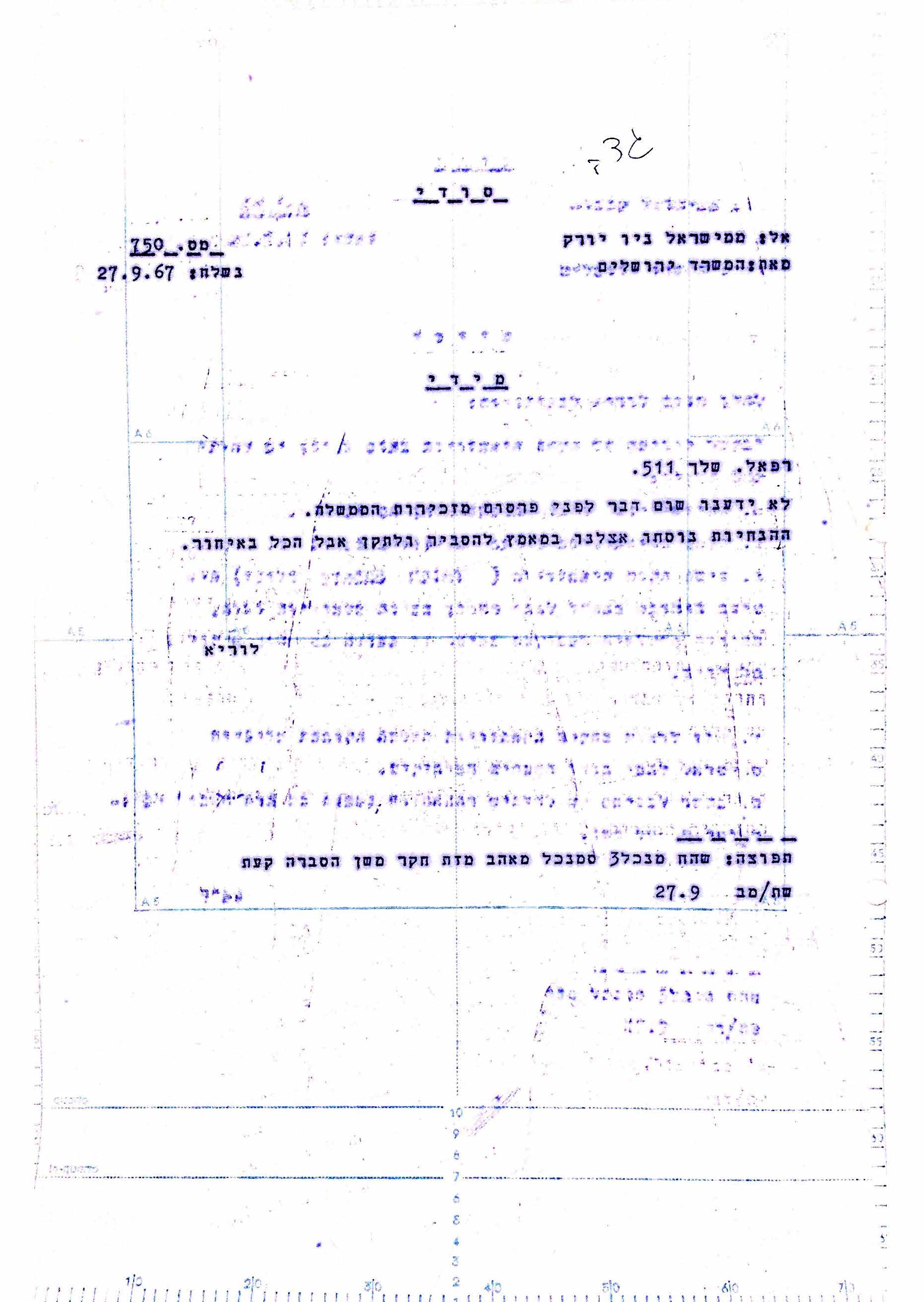 Following a New York Times report about the establishment of settlements in the territories Israel occupied in the 1967 War, the Israeli consulate in New York sent an urgent cable to the Ministry of Foreign Affairs. The consulate noted that the publication “sent shockwaves and elicited widespread negative criticism among our friends and is being exploited by our enemies”, and asked Jerusalem for clarifications on the issue. In the cable, the consulate lists the diplomatic harm caused by the publication, including a notice issued by the American State Department. The consulate complains about not having received warning that the matter has been reported in Israel, which precluded it from preparing to stave off diplomatic damage and negative repercussions for Israel in time. 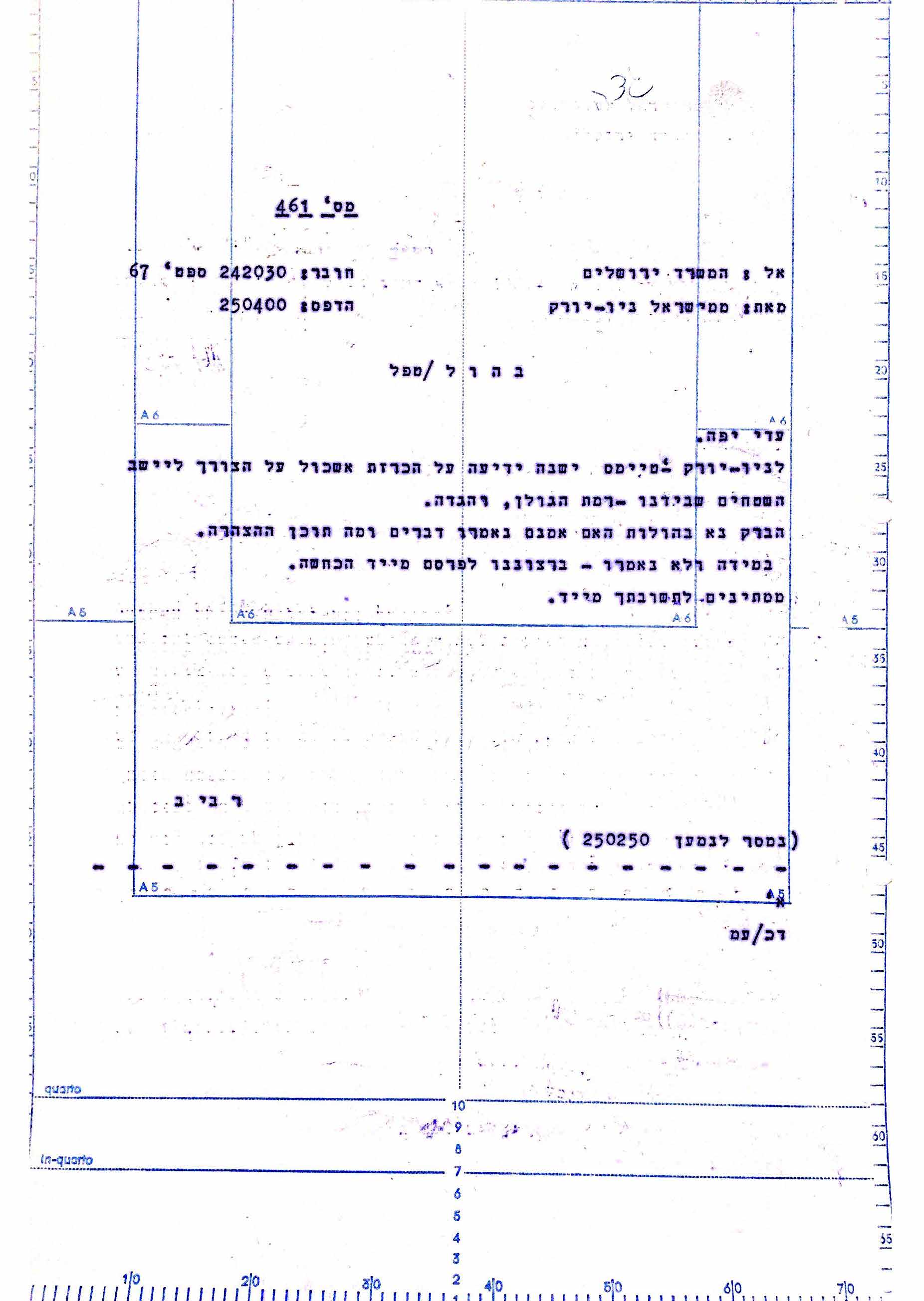 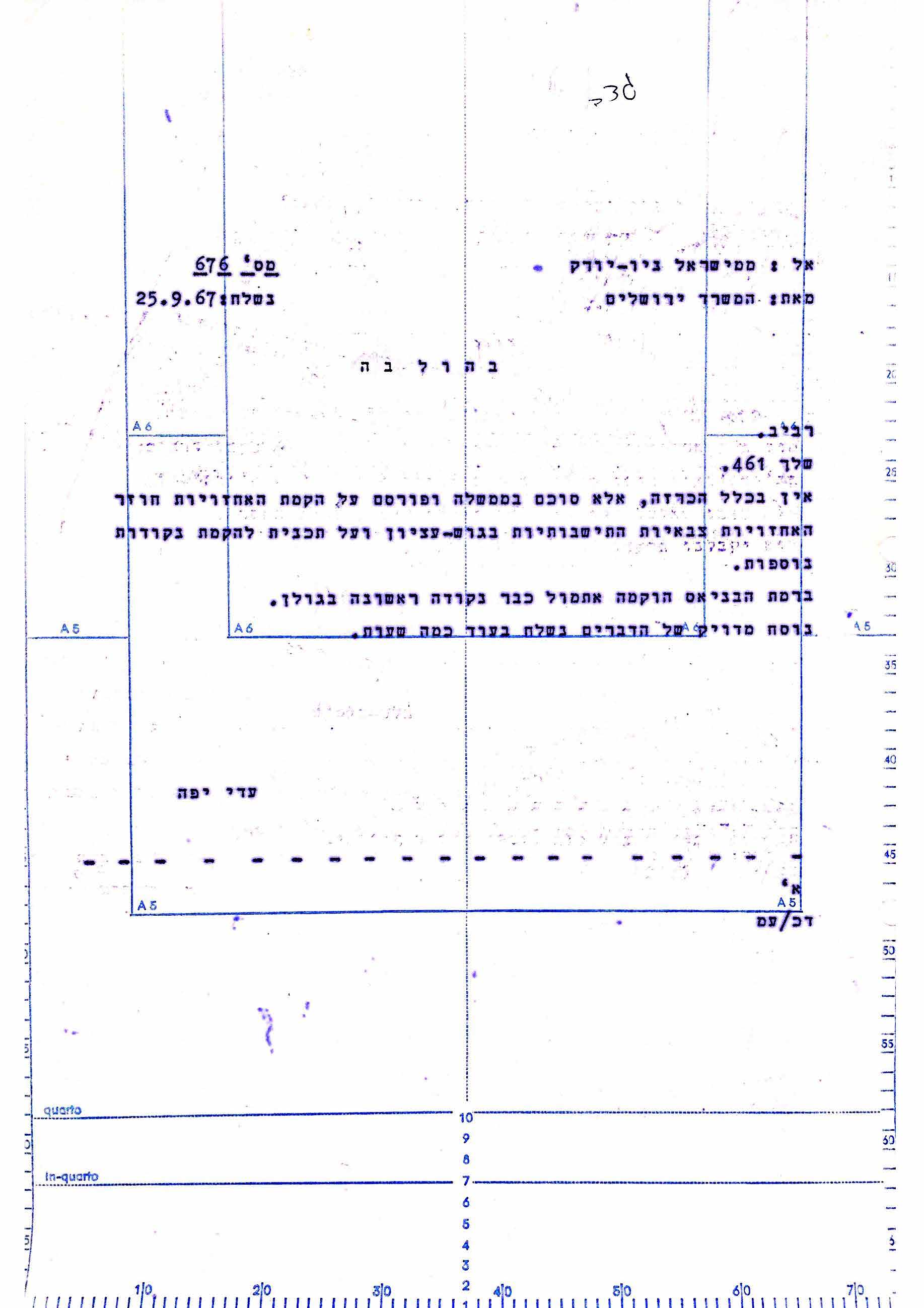 In the wake of rumors and reports around the world of Israel’s plans to establish settlements in the territories it occupied, the Israeli diplomatic mission in New York City contacted the Ministry of Foreign Affairs for clarification on the veracity of the New York Times report that Prime Minister Levi Eshkol had said the occupied territories should be settled. Responding to the urgent communication, the Ministry of Foreign Affairs repeated Israel’s official position that “military-settlement outposts” have been established in Gush Etzion and the Golan Heights. 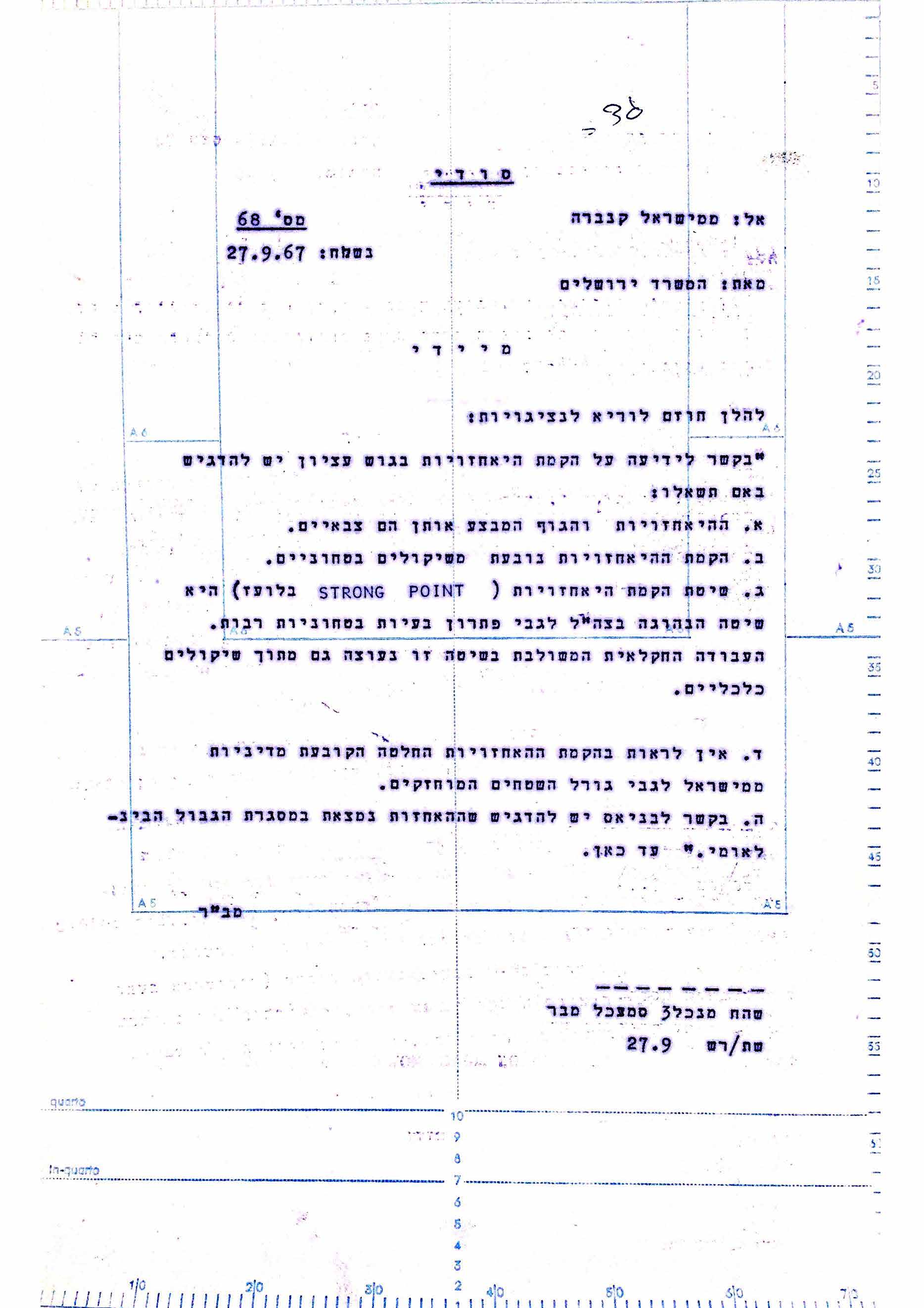 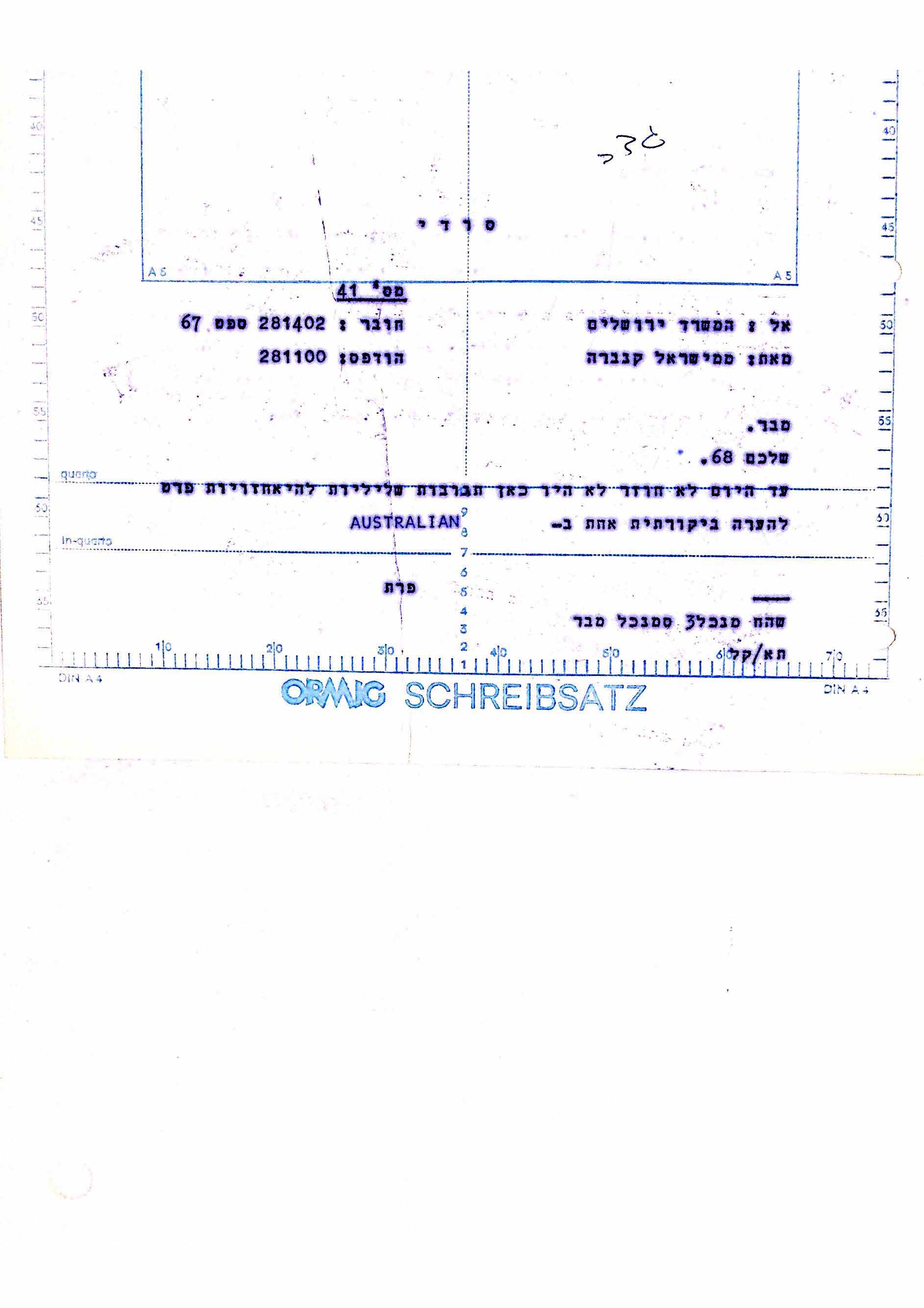 Amid reports that Israel was building settlements in Gush Etzion and the Golan Heights, the Ministry of Foreign Affairs circulated talking points to diplomatic missions around the world to help counter arguments against Israel. In a communique to the Israeli diplomatic mission in Canberra, the Ministry of Foreign Affairs repeated the main argument that the settlements that had been established were military outposts set up for security reasons. The ministry further stressed that the establishment of the settlements was not indicative of “the Israeli government’s policy on the fate of the held territories”. 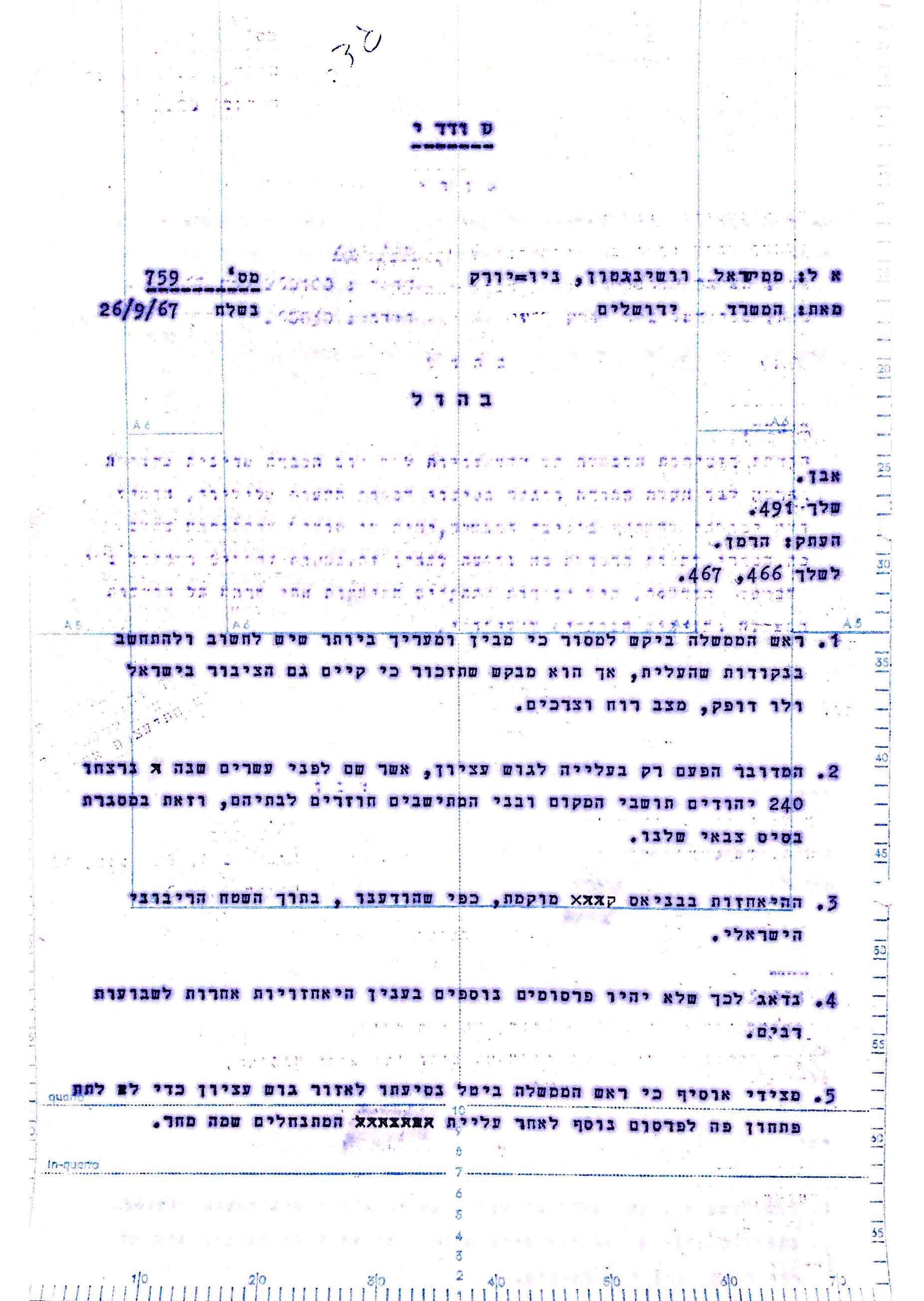 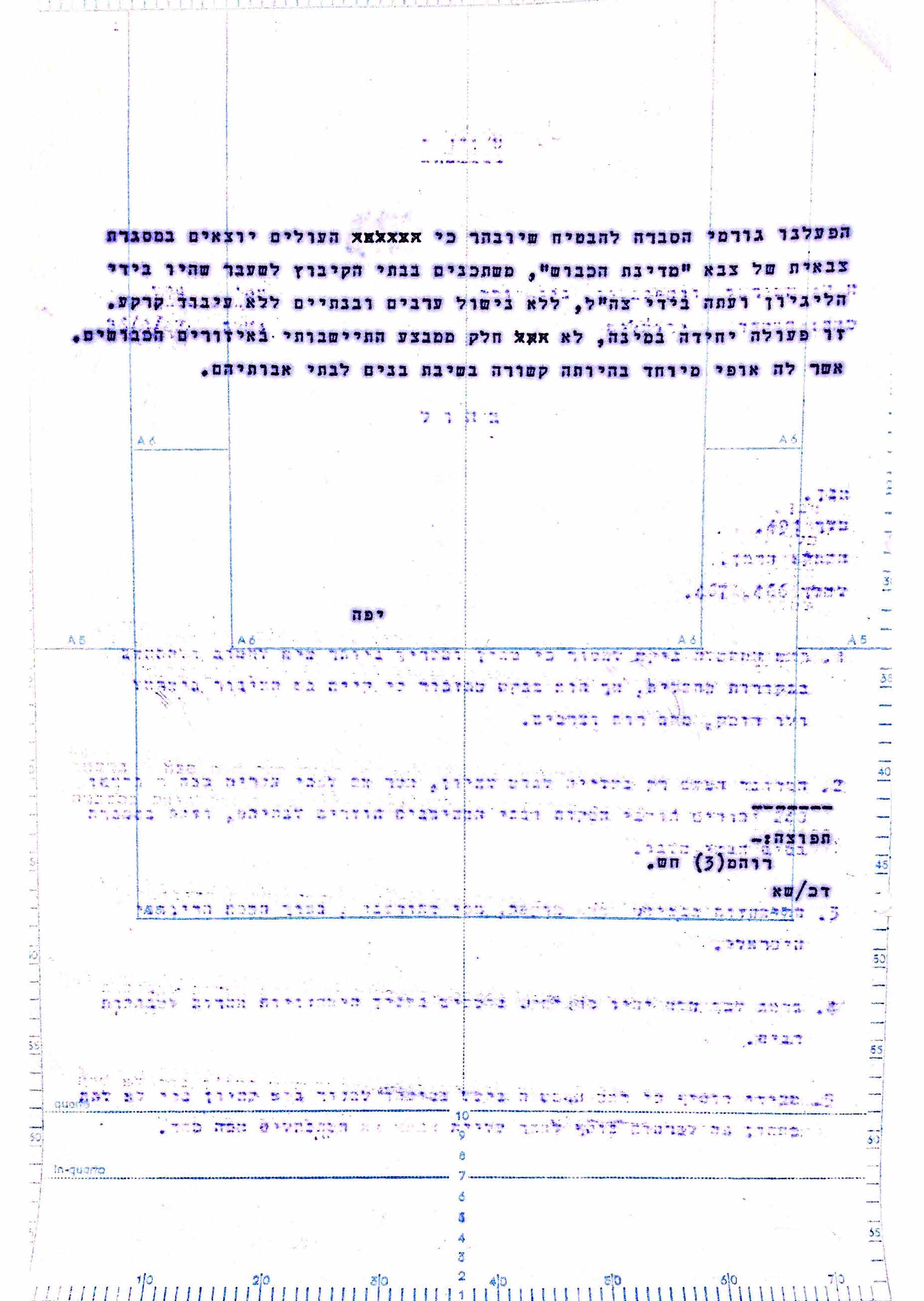 A string of reports on the establishment of Israeli settlements in Gush Etzion and the Golan Heights in the American press caused concern among Ministry of Foreign Affairs staffers. This cable delivered Prime Minister Levy Eshkol’s reaction to the reservations Foreign Minister Abba Eban voiced over the publication of the plan to build settlements in the West Bank and the Golan Heights. Eshkol pleaded for consideration of public opinion in Israel as well: “There is a public in Israel as well, and it has a heartbeat, a mood and needs”. The cable also noted that the settlement in Gush Etzion was no more than a return home by local residents and that the Banias outpost in the Golan Heights was located inside the sovereign territory of the State of Israel. To quiet down the international chatter, the prime minister added he would see to it that there were no more press reports about settlements in the occupied territories in the coming weeks. The cable further stated the prime minister had canceled his trip to Gush Etzion where settlers were expected to take up residence the following day. 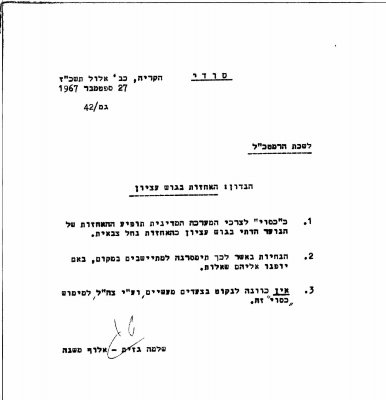 Letter of Colonel Shlomo Gazit to Office of the Chief of Staff
September 27, 1967 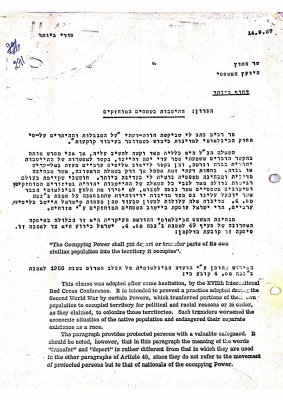 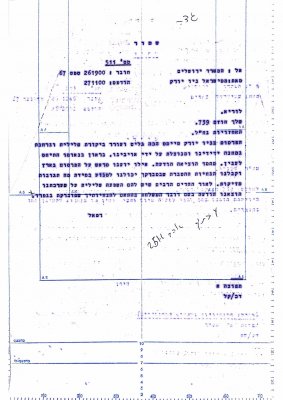 Cable from Israeli Consulate in New York City to Ministry of Foreign Affairs in Jerusalem
September 26, 1967 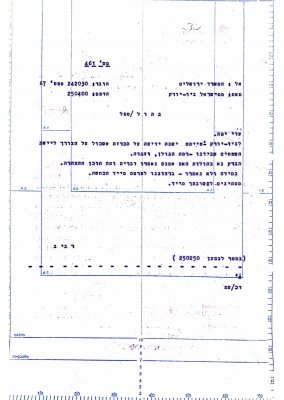 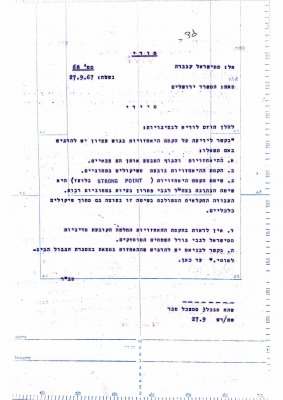 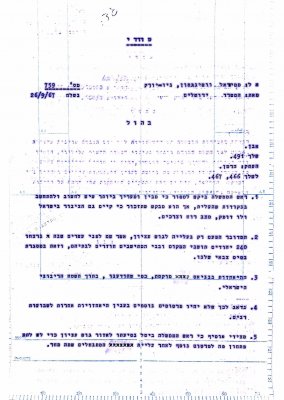 Cable from Ministry of Foreign Affairs in Jerusalem to Israeli diplomatic missions in Washington DC and New York City
September 26, 1967