The State of Israel and the Laws of Occupation: the Beginning

How Israel almost, accidentally, annexed the Gaza Strip and the Sinai Desert, and got acquainted with international law on military occupation 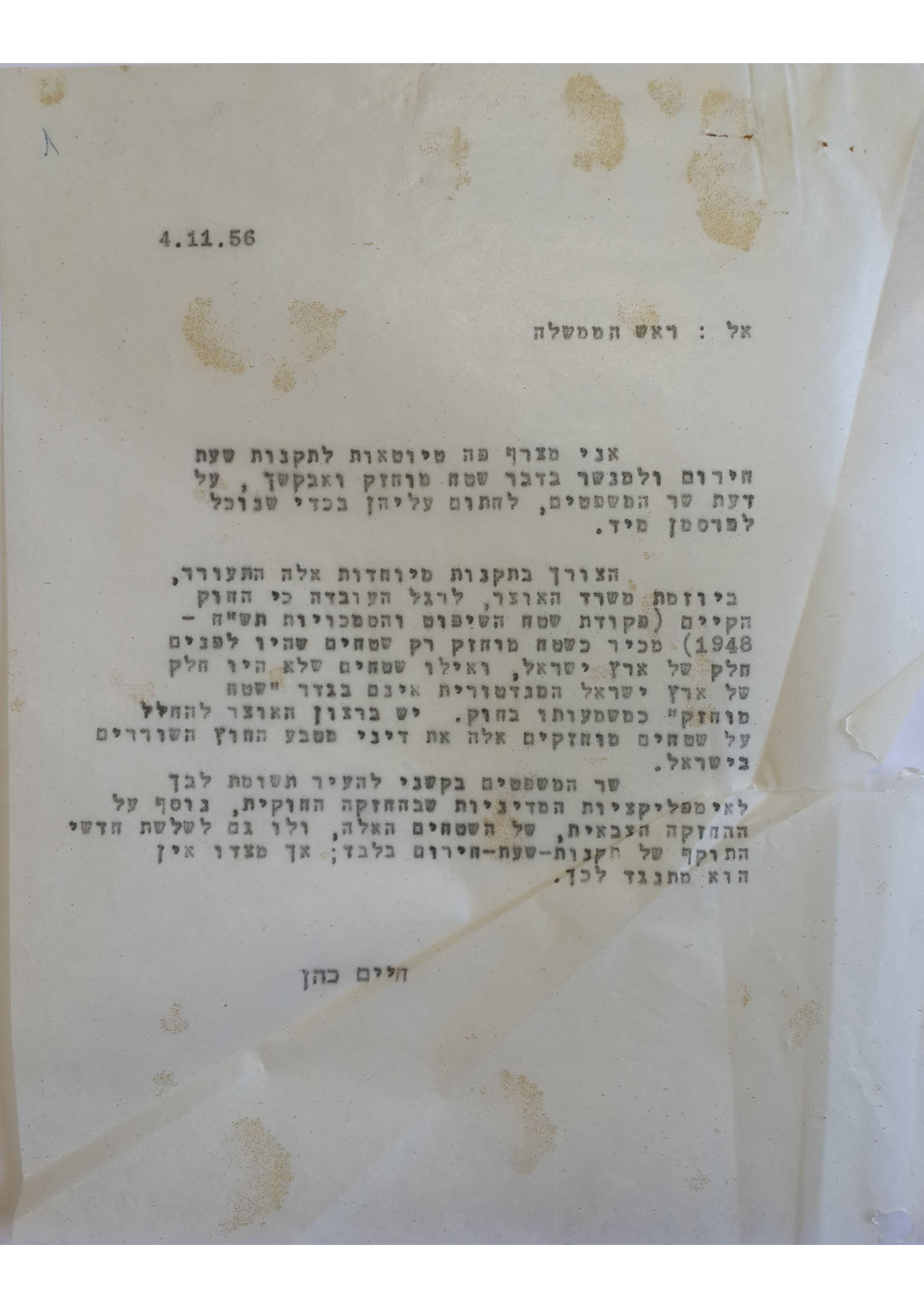 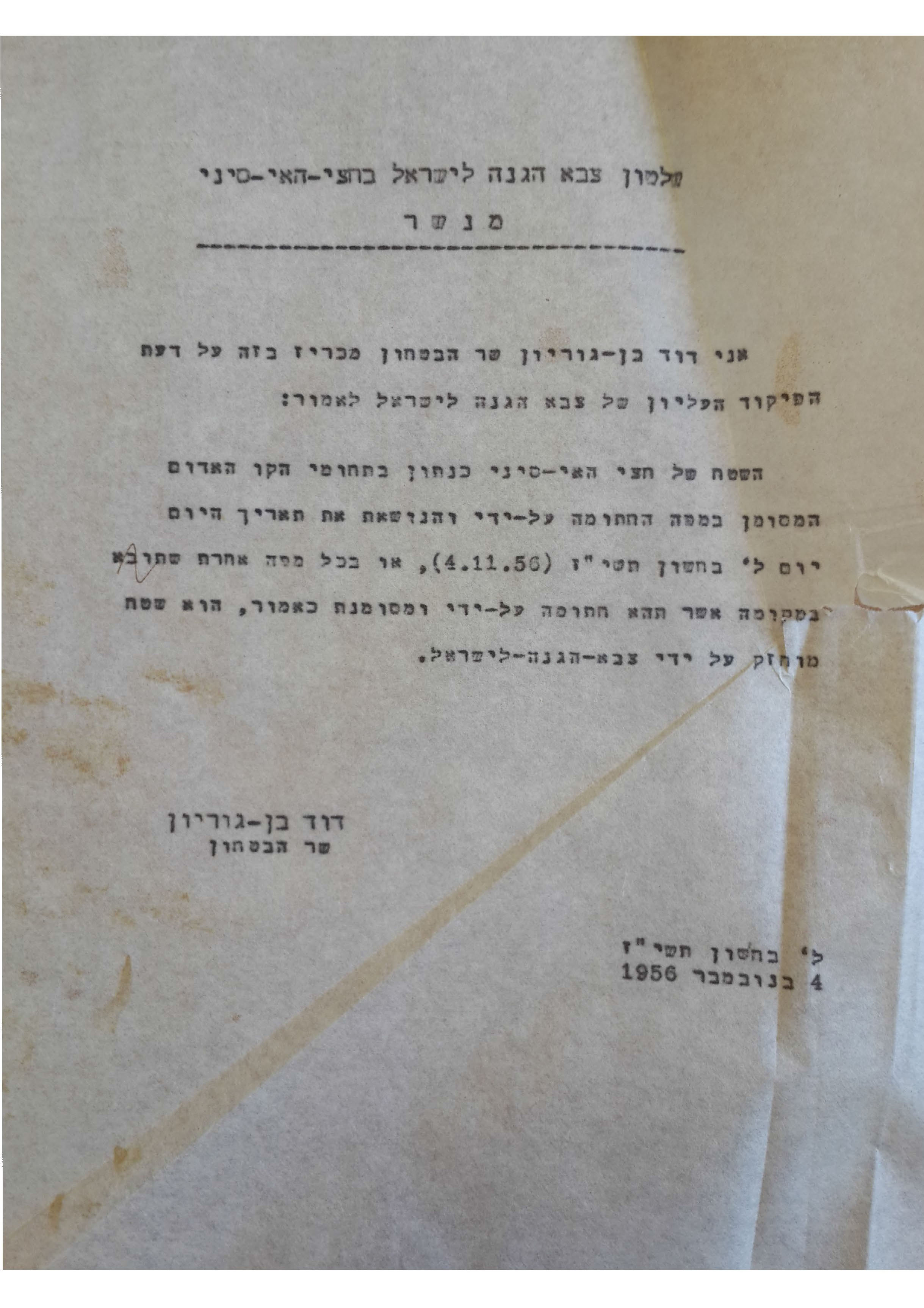 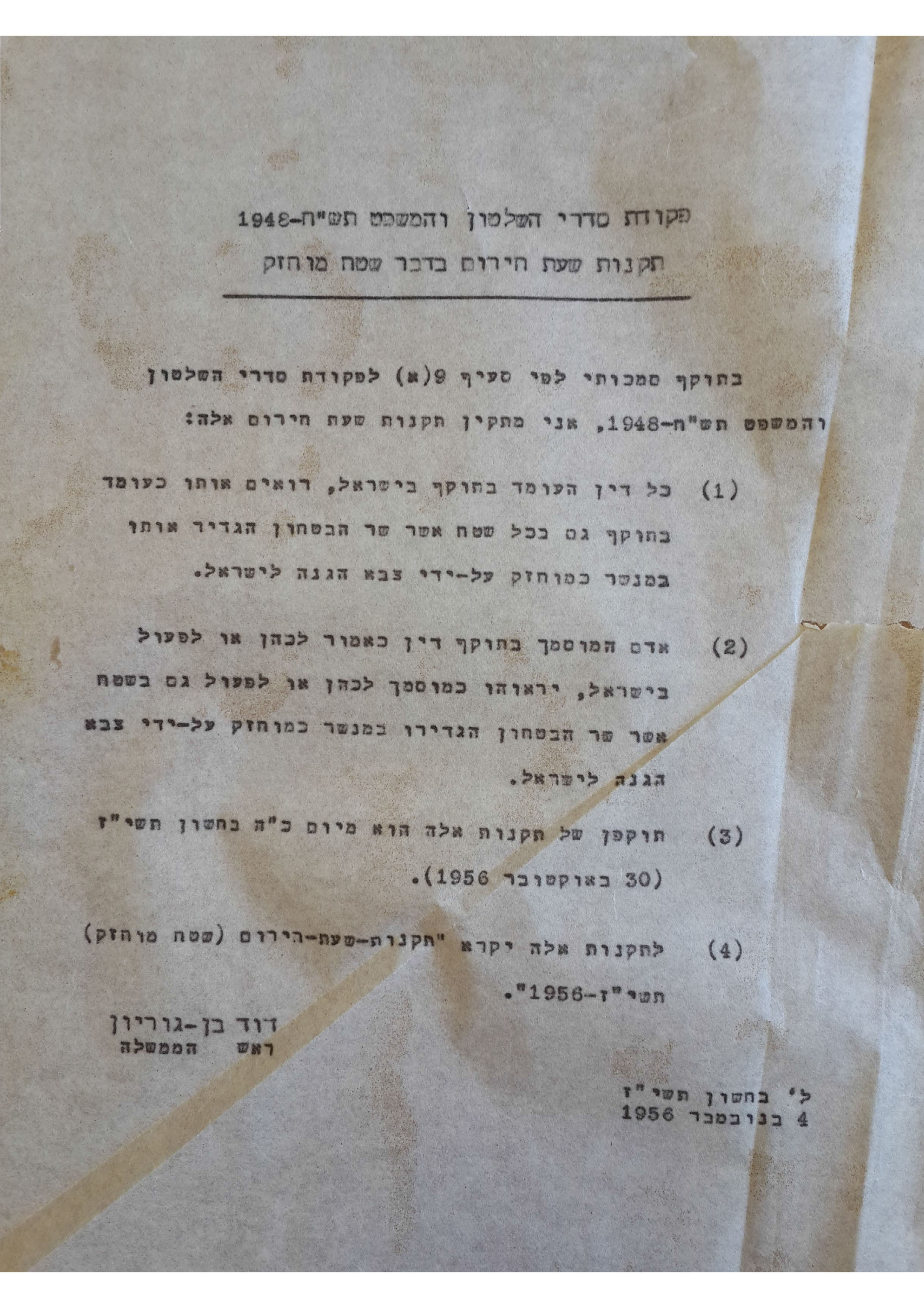 On November 4th, 1956, Attorney General Haim Cohn sent to Defense Minister David Ben Gurion draft documents to sign. The documents were intended to determine the legal status of the territories the IDF occupied over the past few days in Sinai Peninsula and Gaza Strip. 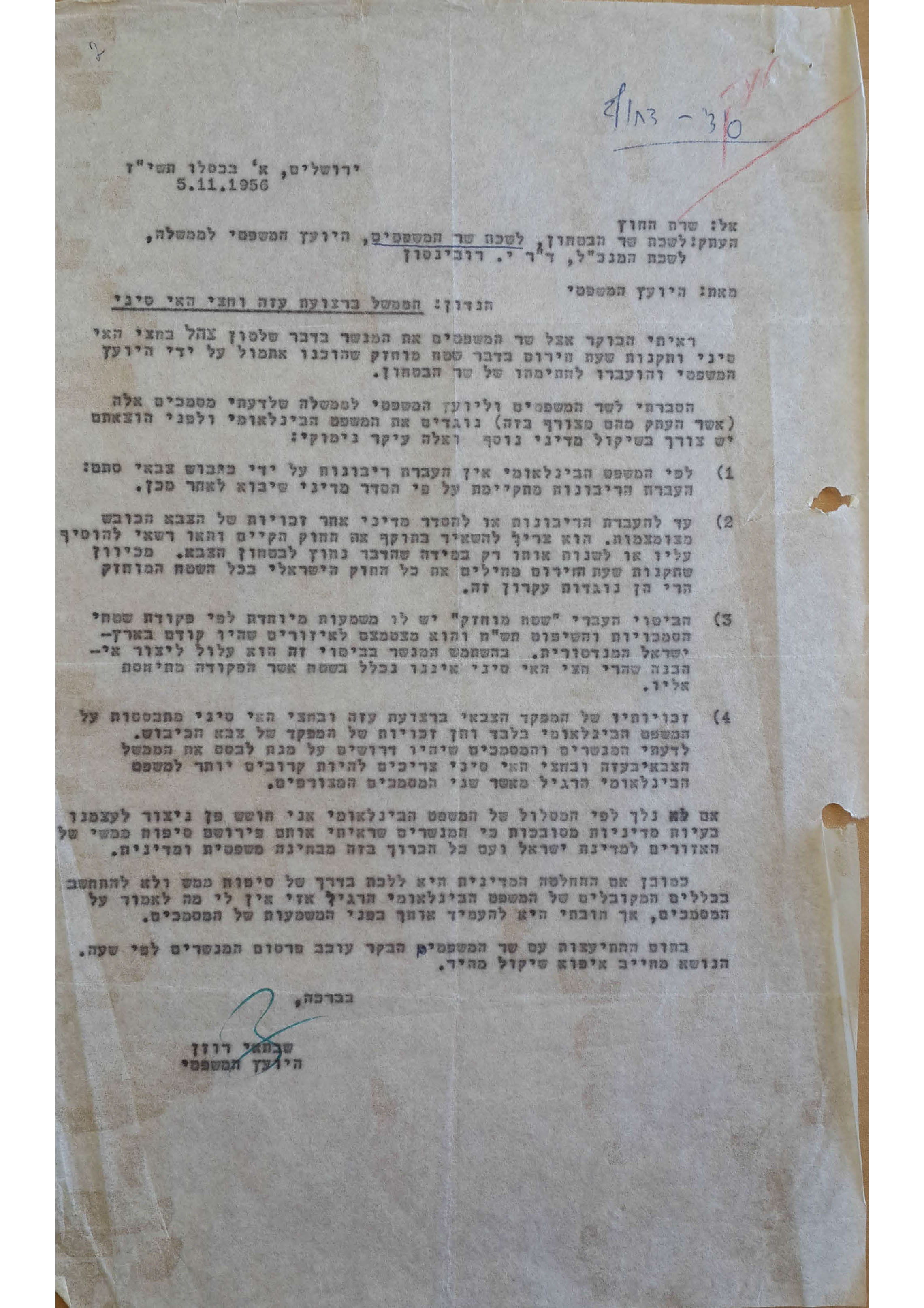 A warning against annexation

In this letter to Minister of Foreign Affairs Golda Meir, the ministry’s legal advisor, Shabtai Rosen, cautions against the annexation of the Sinai Peninsula and Gaza Strip which would be put into effect once the minister of defense signed the documents prepared by the attorney general. Rosen explains how the proposed legislation violates the principles of international law and stresses that any rights the military commander has to take action in the Gaza Strip and Sinai Peninsula derive from international law alone, not Israeli law.

“The proclamations I have seen mean effective annexation of the areas to Israel”, Rosen says, and cautions such annexation could have serious diplomatic repercussions. Rosen concludes by telling Minister Meir that the legislation had been put on hold thanks to a conversation he had had with the minister of justice, and urged for expedient consultation on the matter.

Rosen’s letter enclosed the drafts of the documents: a minister of defense proclamation the Sinai Peninsula is a “Held Territory” and emergency regulations that apply Israeli law and administrative powers to Sinai and the Gaza Strip. 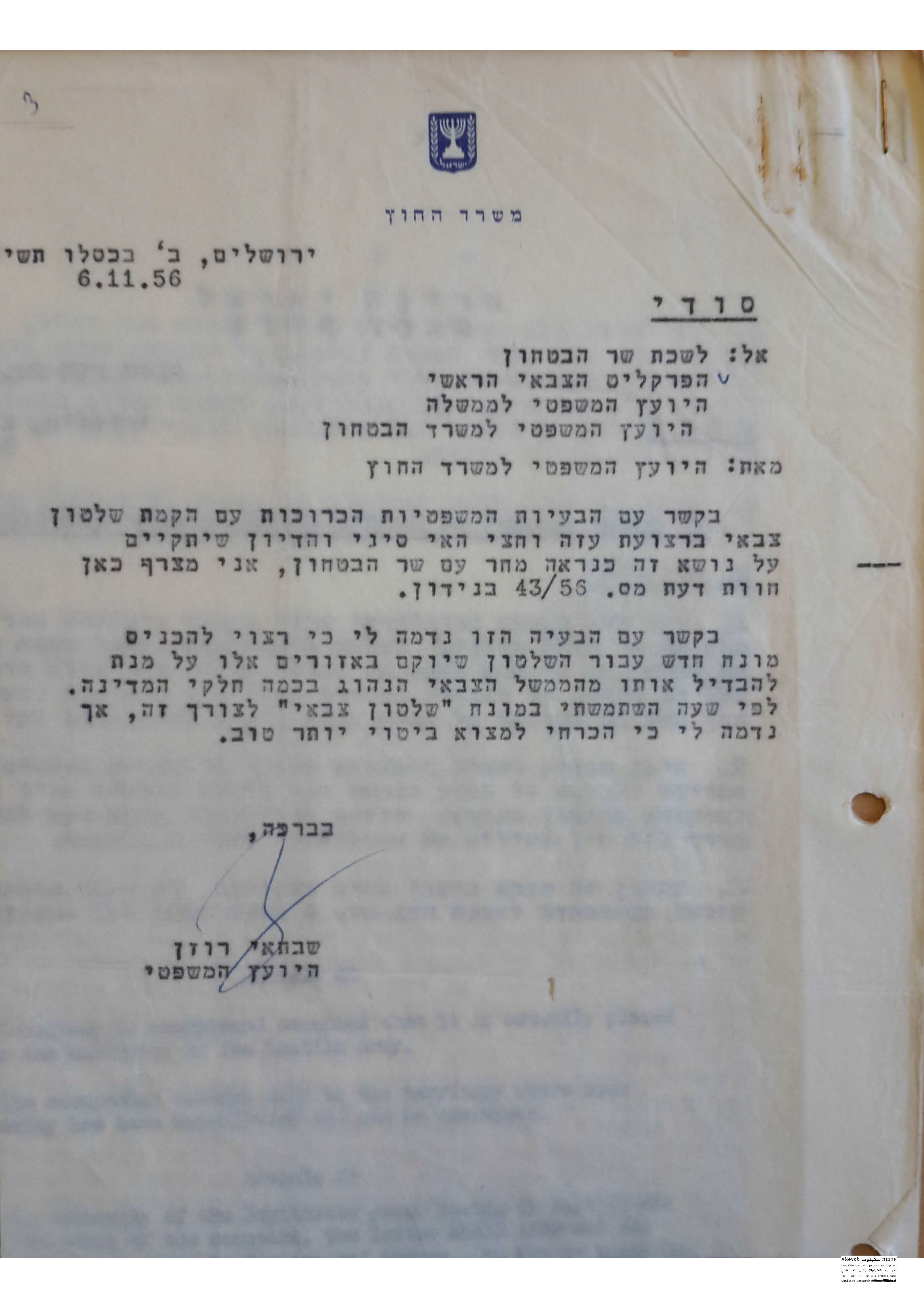 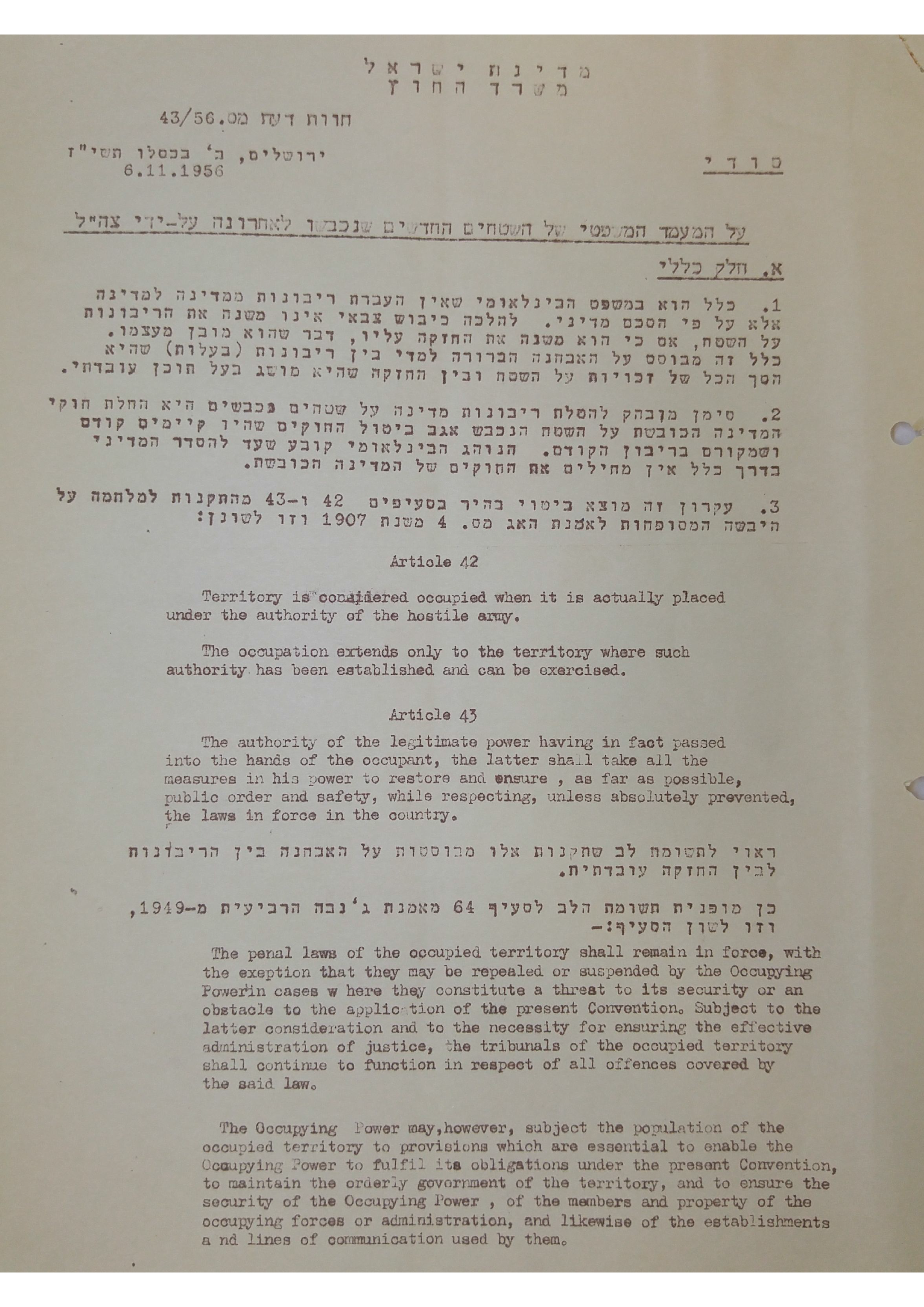 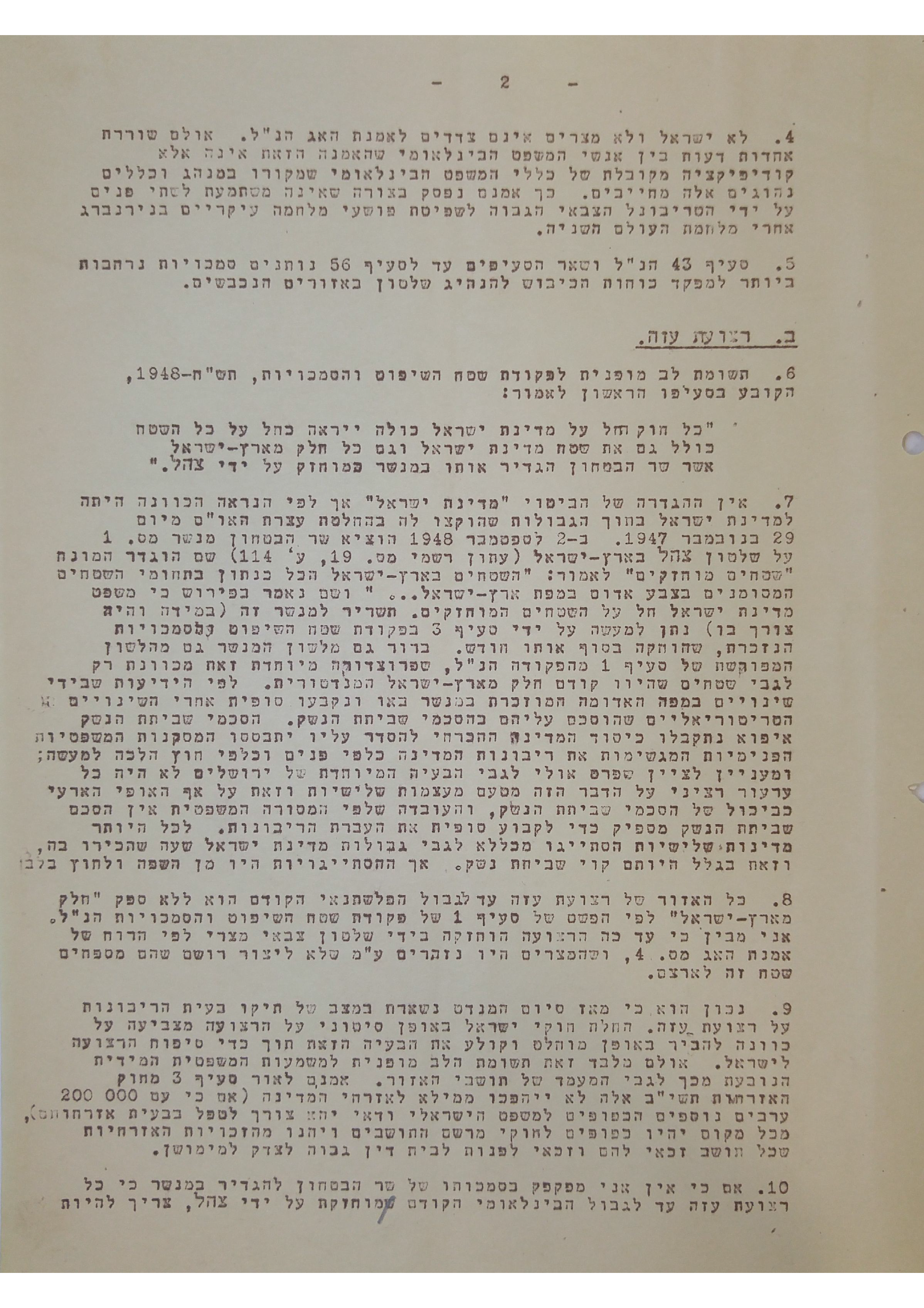 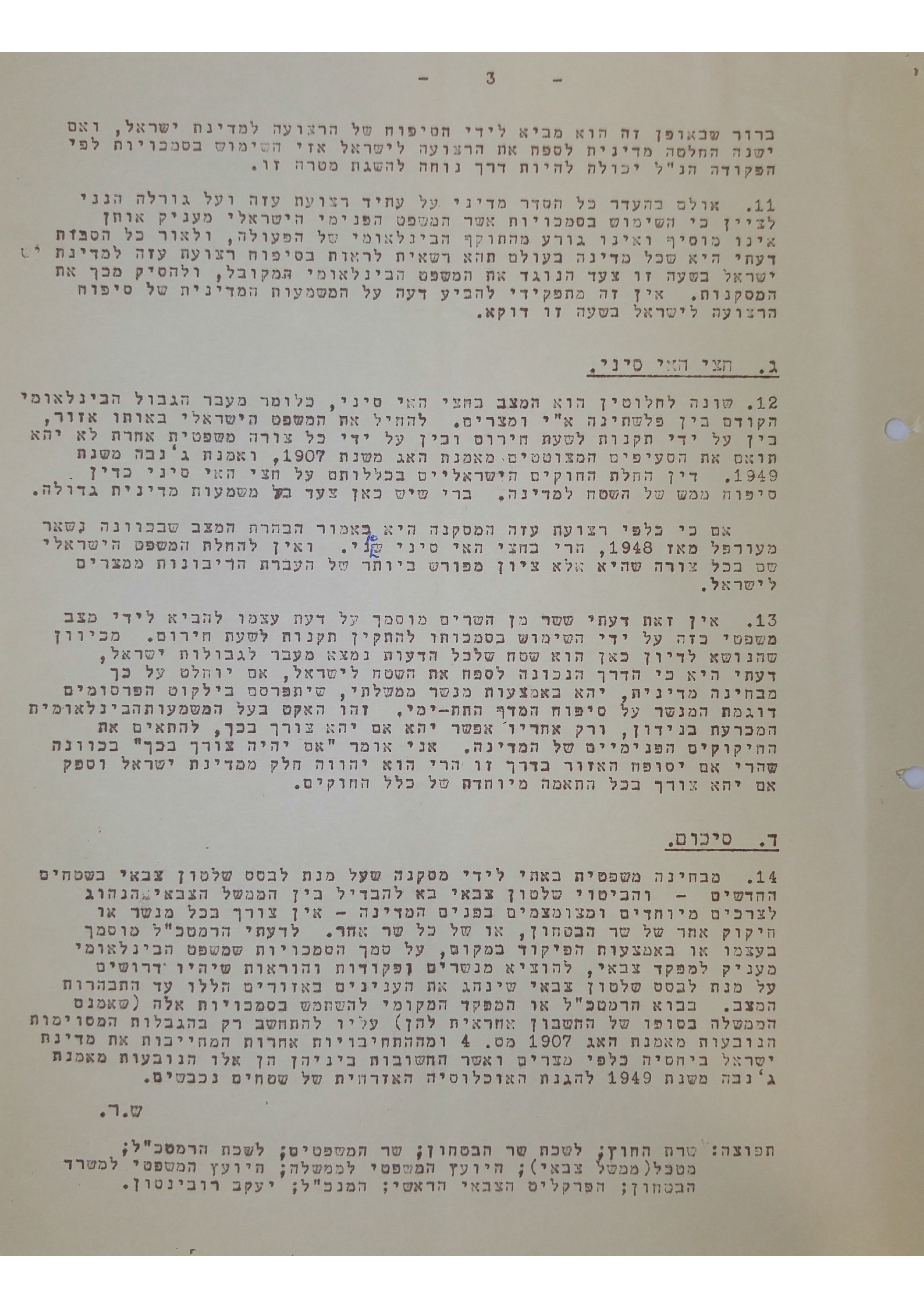 Opinion: The legal status of the new territories

On November 6, 1956, the day after Shabtai Rosen, legal advisor to the Ministry of Foreign Affairs sounded the alarm bell over the draft proclamation and regulation that could have resulted in the annexation of the Gaza Strip and Sinai Peninsula, Rosen prepared a detailed memo on the matter. He explained the principles of the laws of occupation within international law and stressed annexation could cause Israel serious diplomatic damage.

The memo was circulated to the offices of the minister of defense, the military advocate general, and the legal advisor to the Ministry of Defense, as part of Rosen’s efforts to convene an urgent consultation before Prime Minister and Minister of Defense David Ben Gurion signed the documents. The memo notes that The Hague Regulations and the Fourth Geneva Convention provide the relevant legal framework for Israeli action in the territories it occupied. 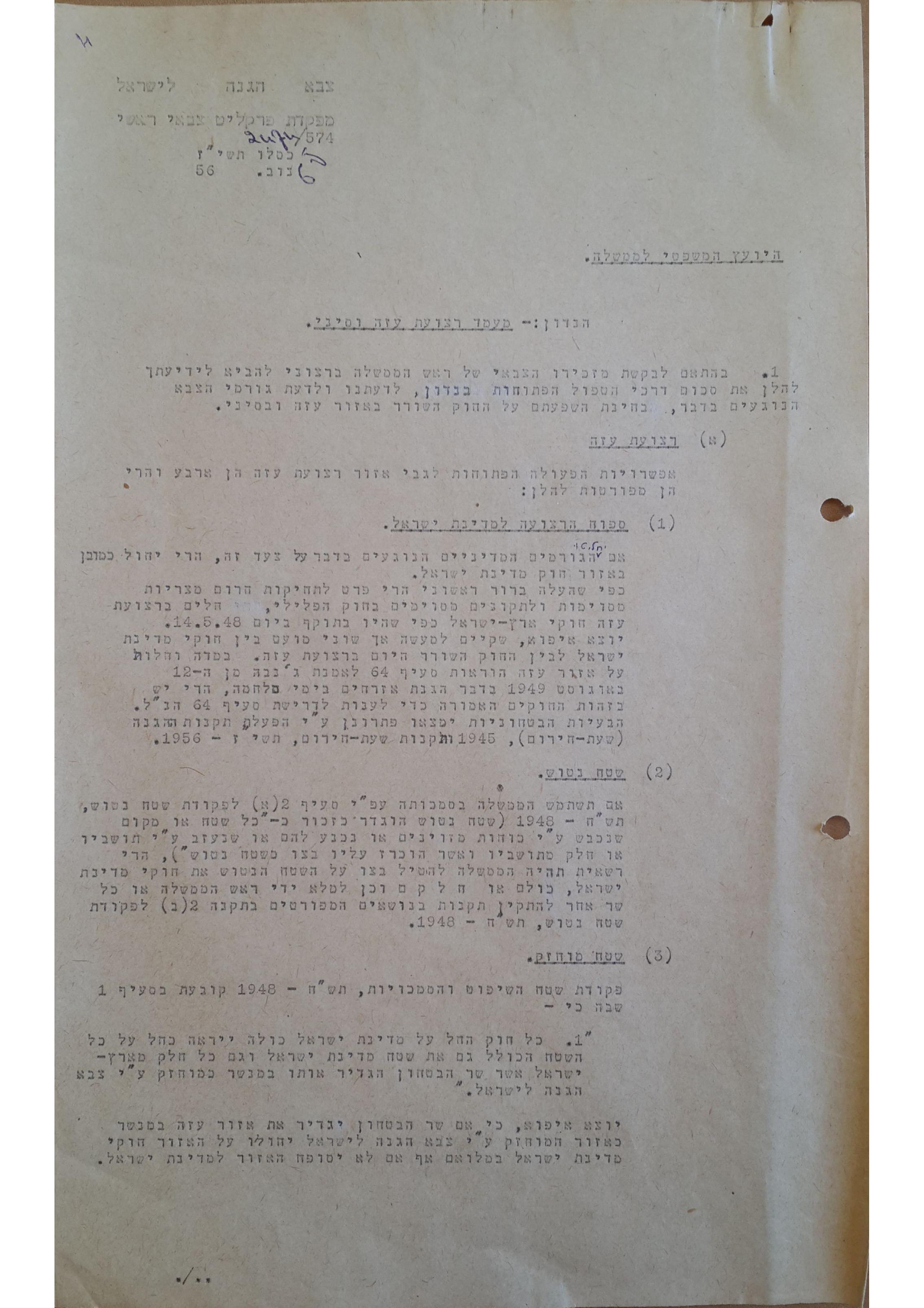 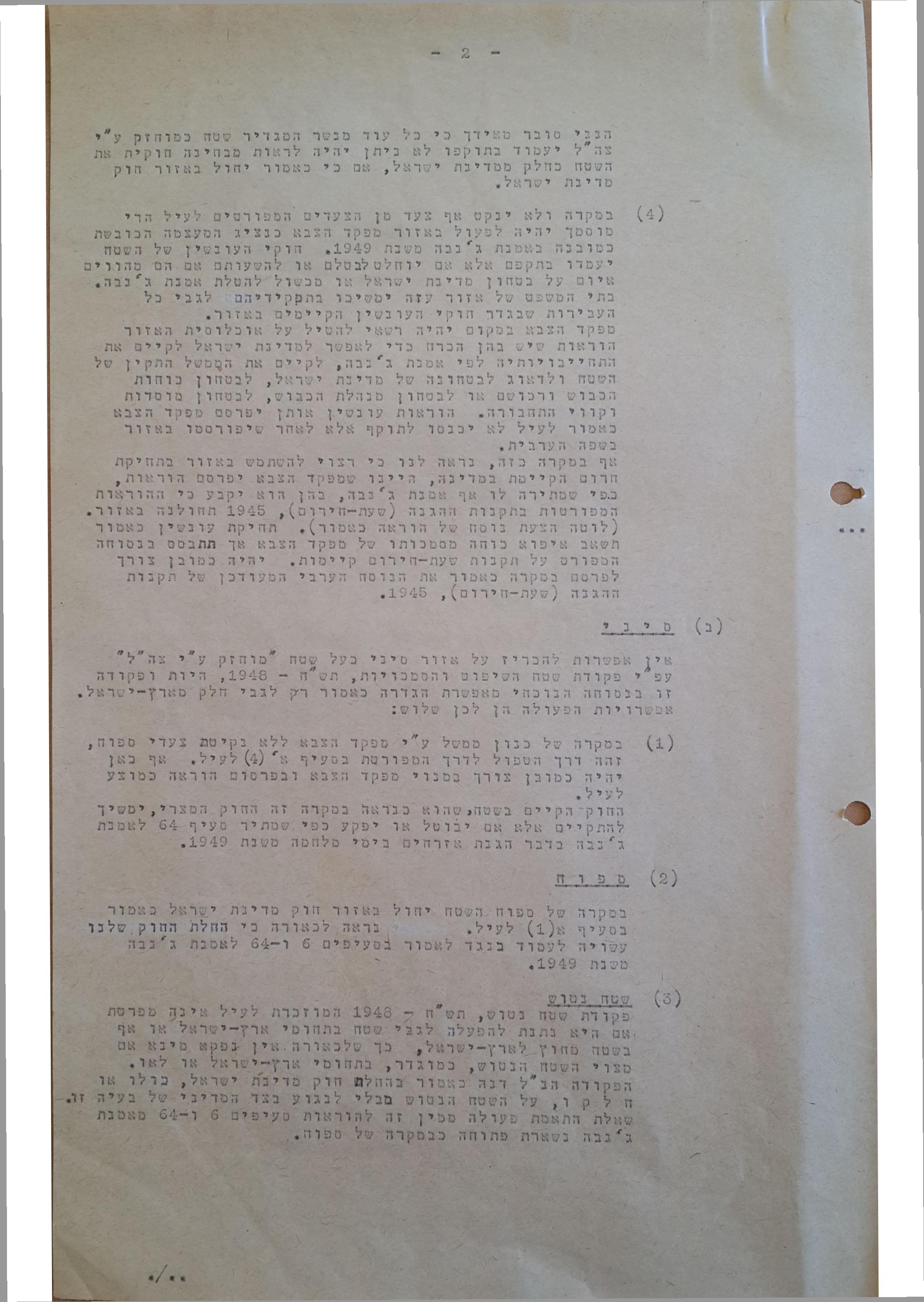 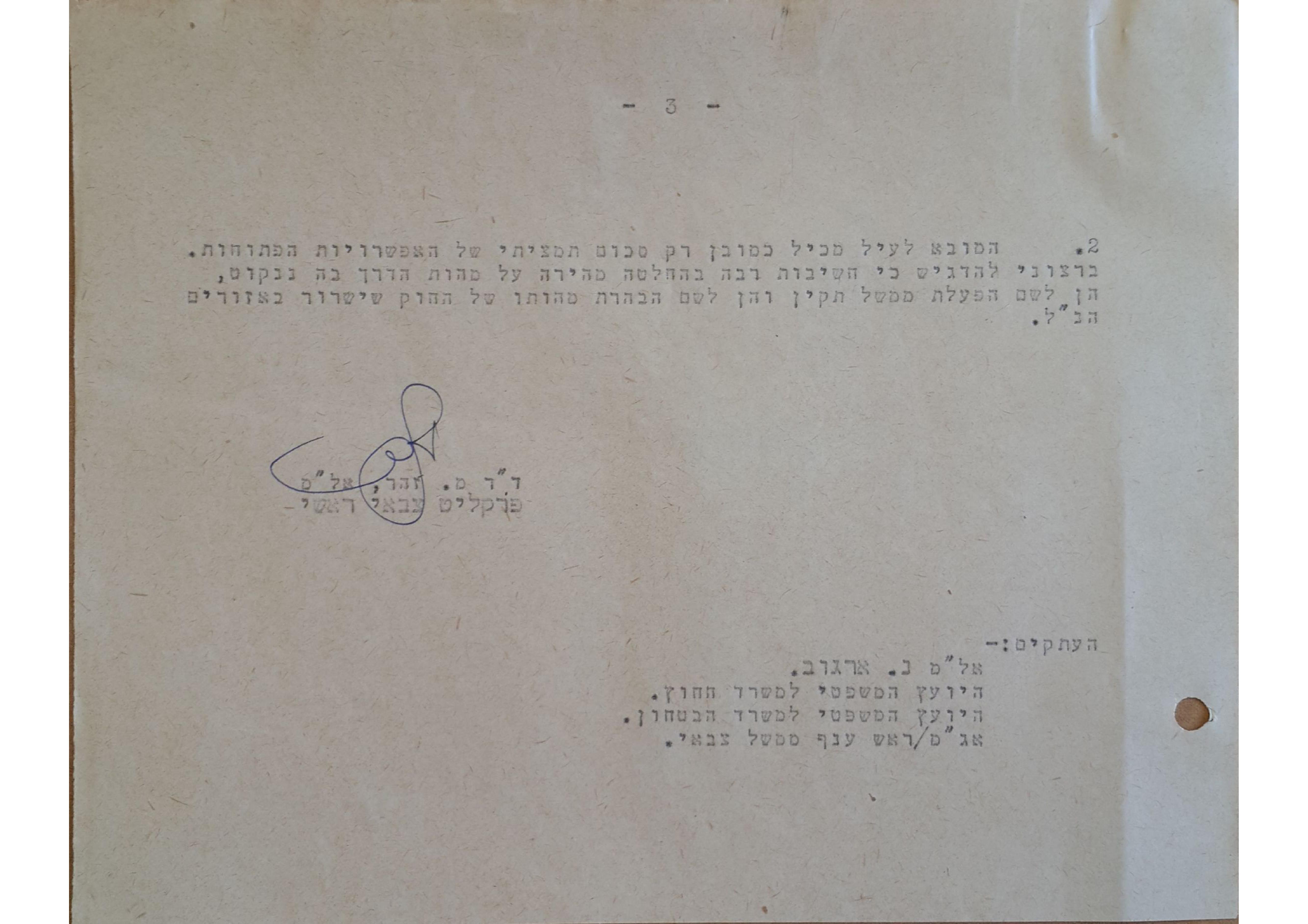 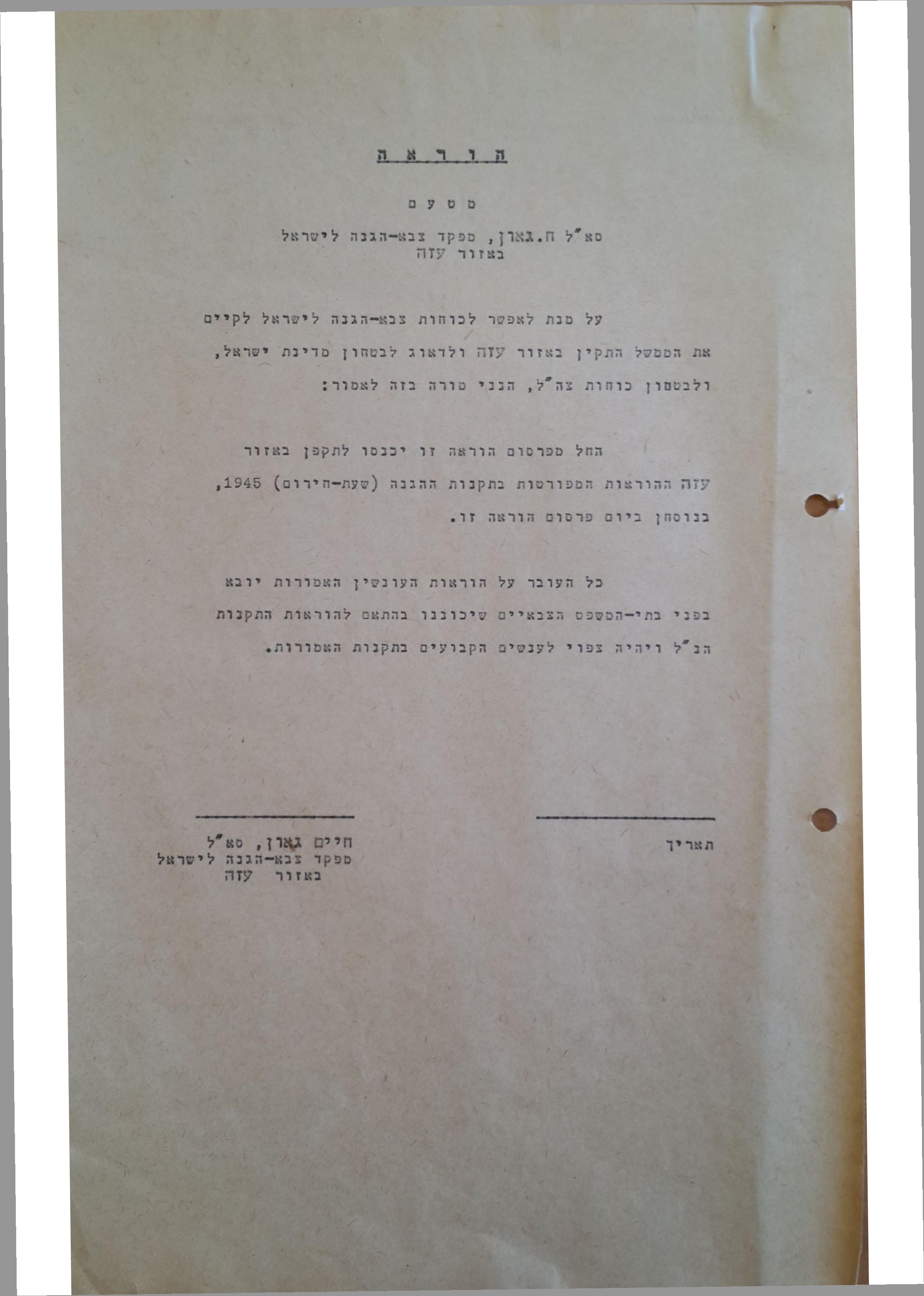 MAG Opinion: The Status of the Gaza Strip and the Sinai

On November 6, 1956, the same day he received the opinion of the legal advisor to the Ministry of Foreign Affairs, cautioning against annexation (Document 2), the Military Advocate General (MAG) sent the attorney general a letter regarding “The status of the Gaza Strip and the Sinai” and what legal avenues apply.

In his letter, the MAG, Col. Dr. Meir Zohar, cautioned that the annexation of the Gaza Strip and the Sinai to Israel was prohibited under international law, and suggested several legal avenues for applying Israeli rule over the two areas. The letter refers to the same sources of international law mentioned in Shabtai Rosen’s memo. “Should none of the listed measures be taken, the military commander would be vested with the power to operate in the area as the representative of the occupying power in the meaning of term under the Geneva Convention of 1949”. 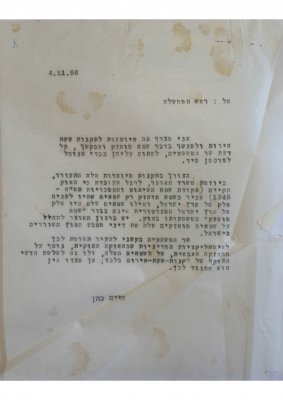 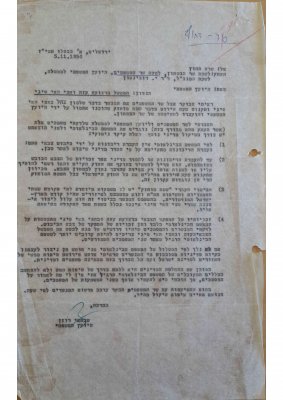 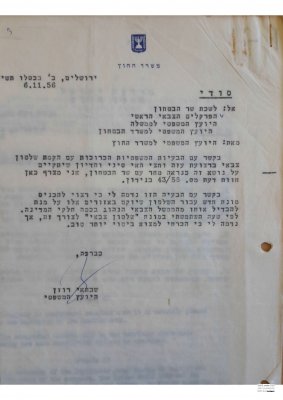 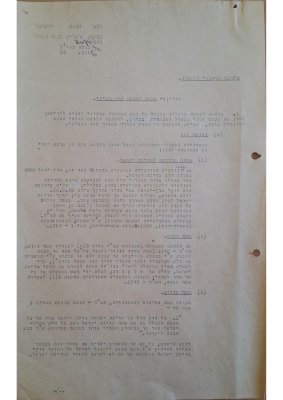