On July 4th, 1967, Prime Minister Levi Eshkol appointed a Special Inter-Ministry Committee for Diplomatic Contacts in the Occupation Areas. The committee was tasked with making findings and drafting recommendations for Israel’s policy in the Occupied Territories. Dr. Yaacov Herzog, Director General of the PMO was put in charge of the committee’s work, and membership included Maj. Gen. Chaim Herzog, Dave Kimchi (Mossad), Moshe Sasson and Shaul Bar Haim (Ministry of Foreign Affairs). On July 20th, the committee submitted its findings and recommendations: a two-page summary and a number of short annexes which detailed reviews and proposals for Israeli rule in the West Bank. 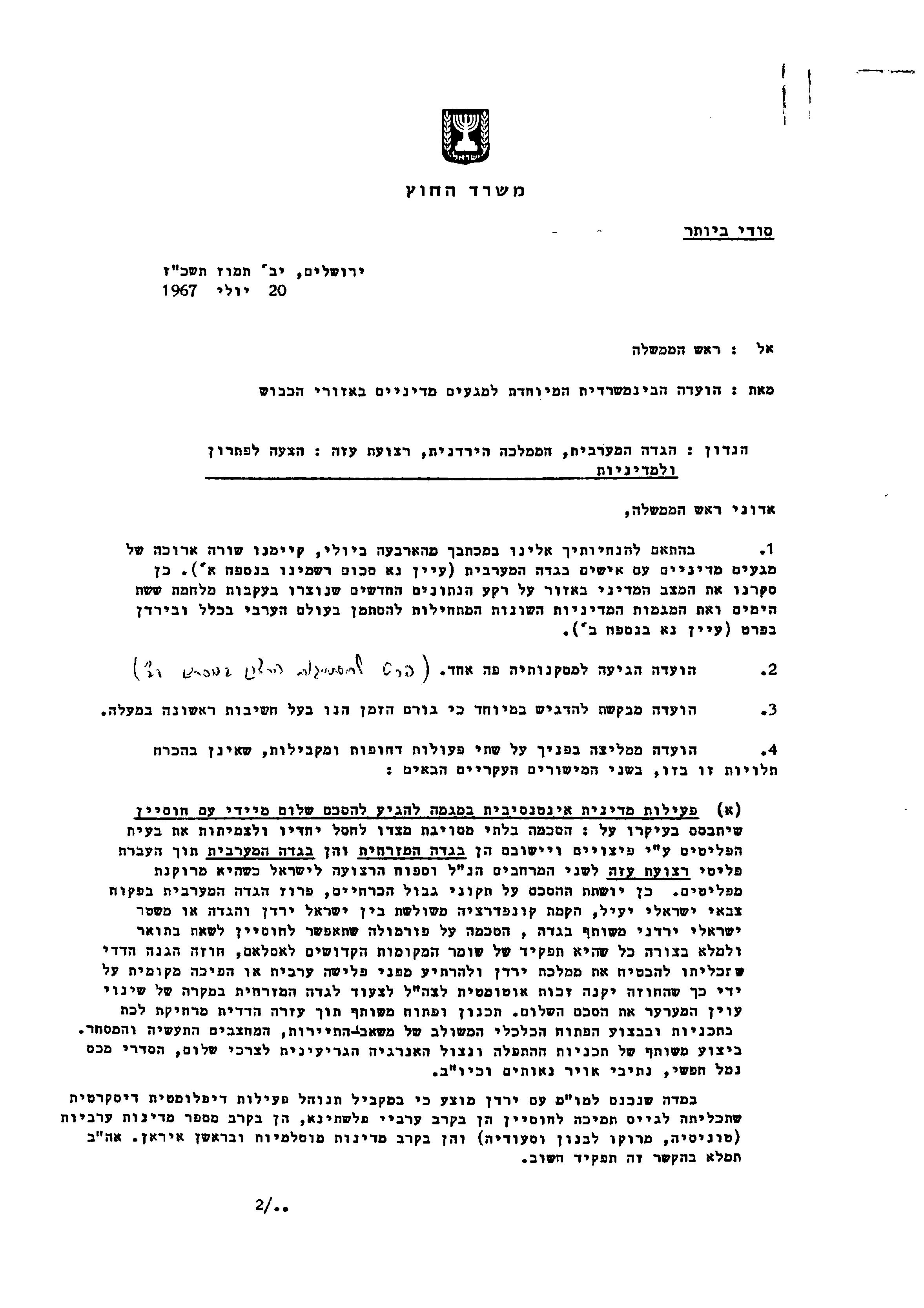 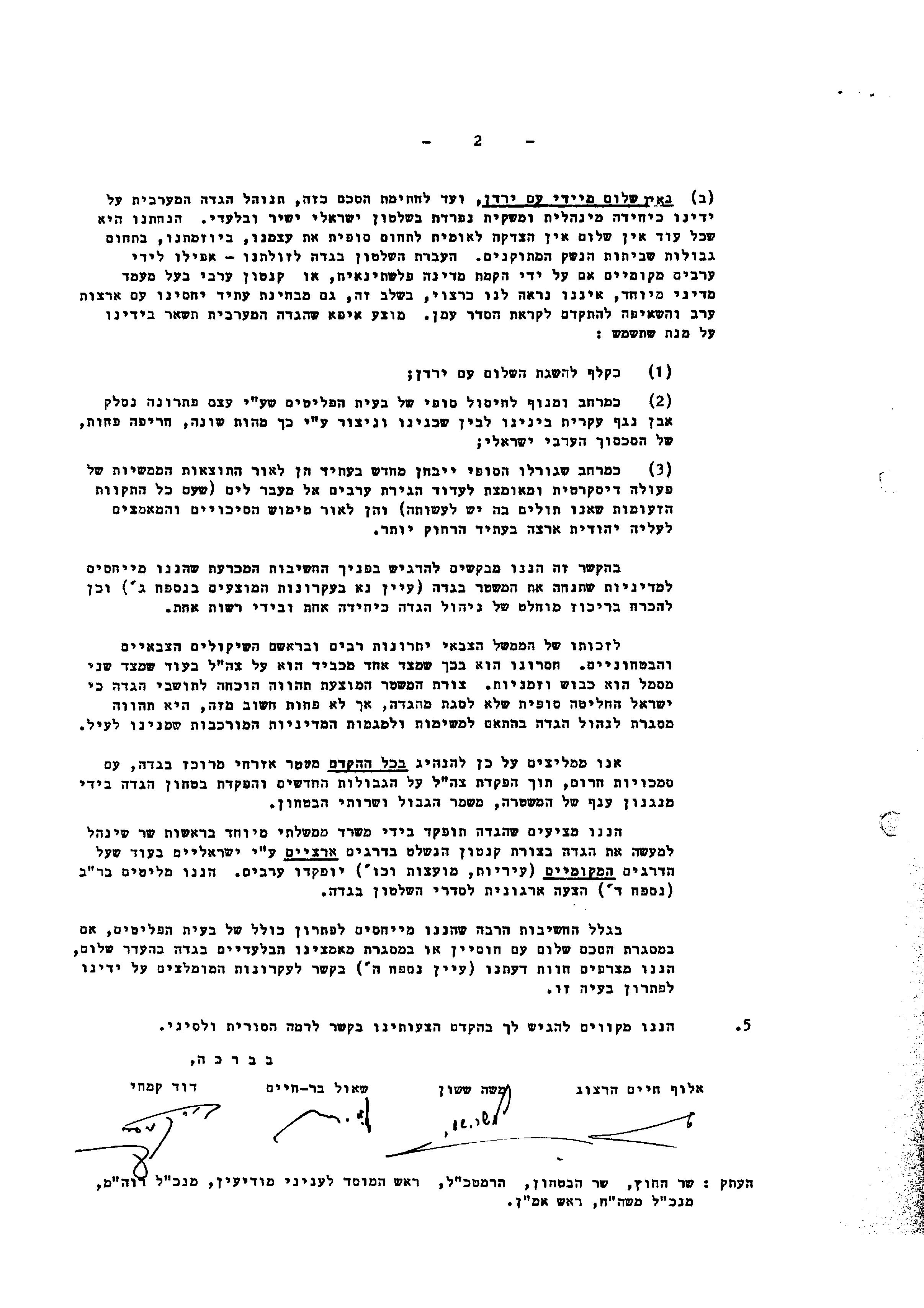 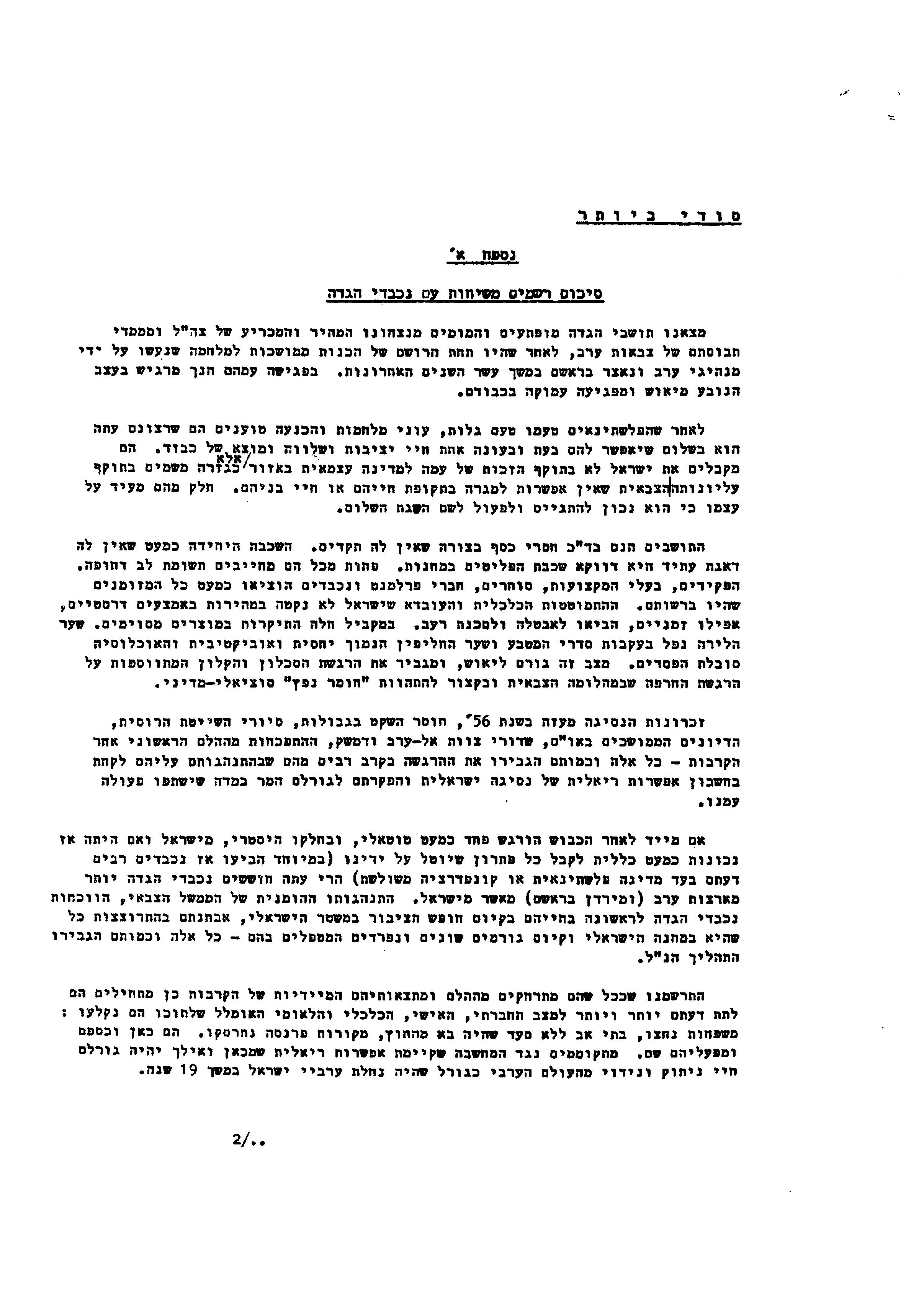 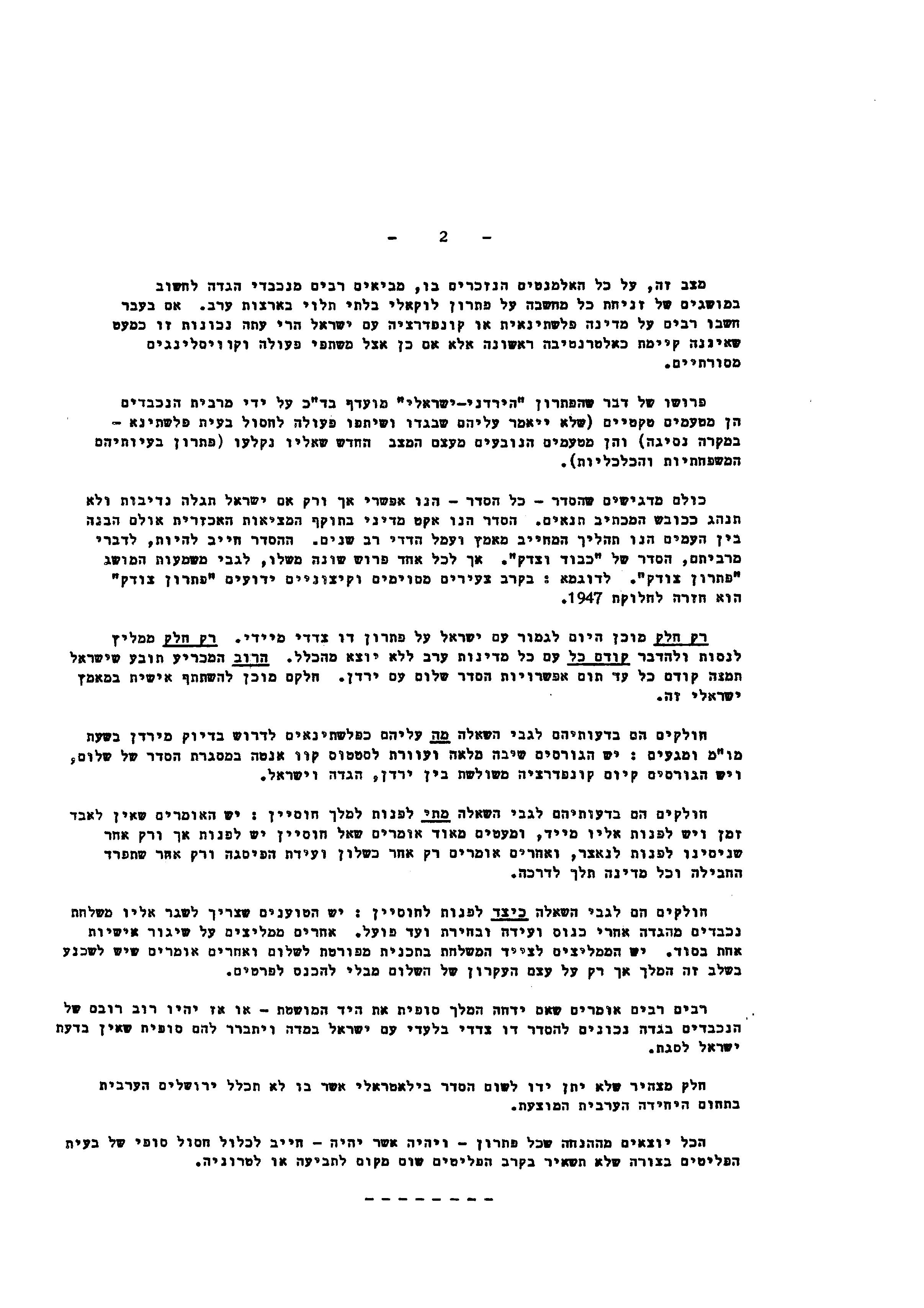 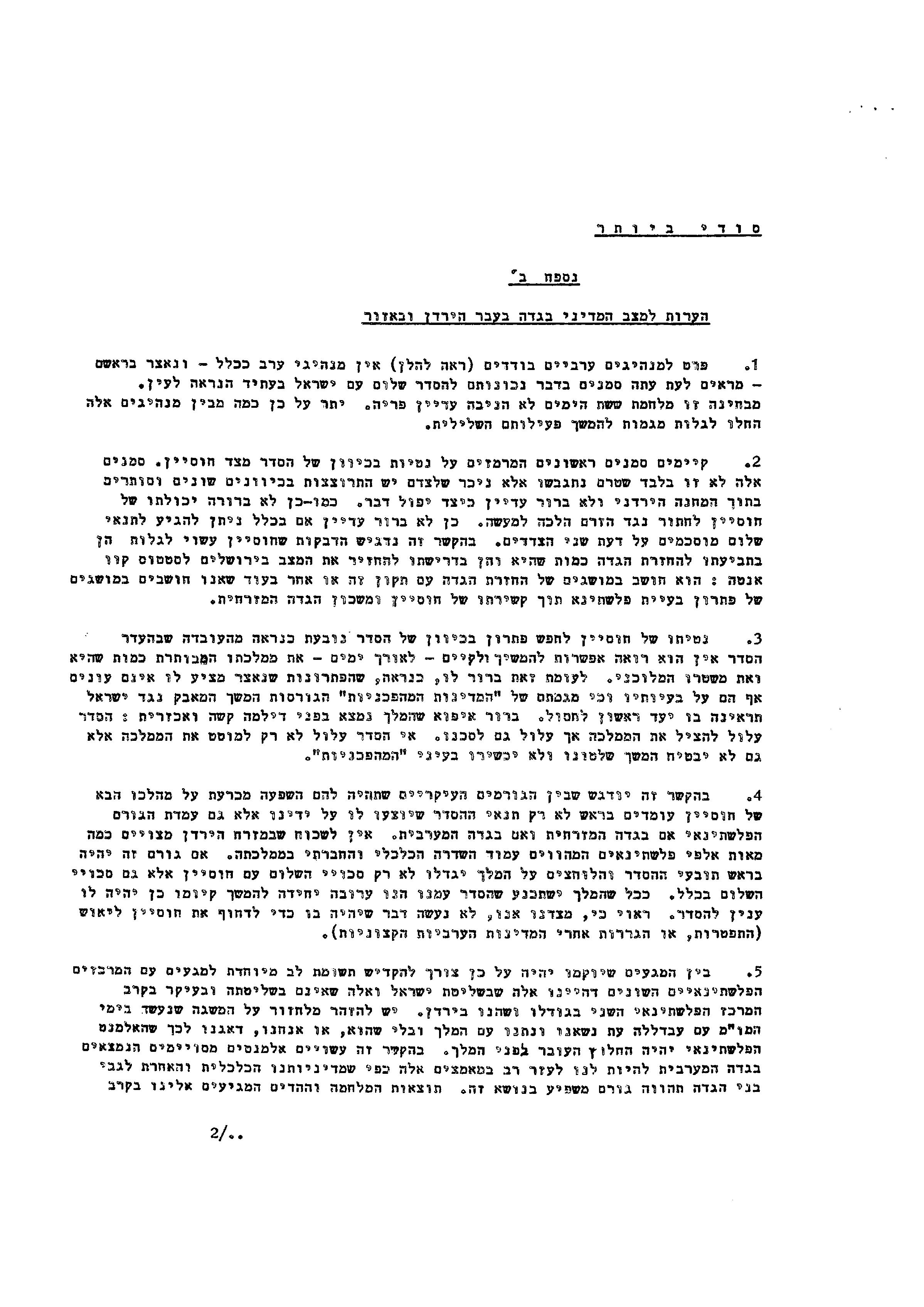 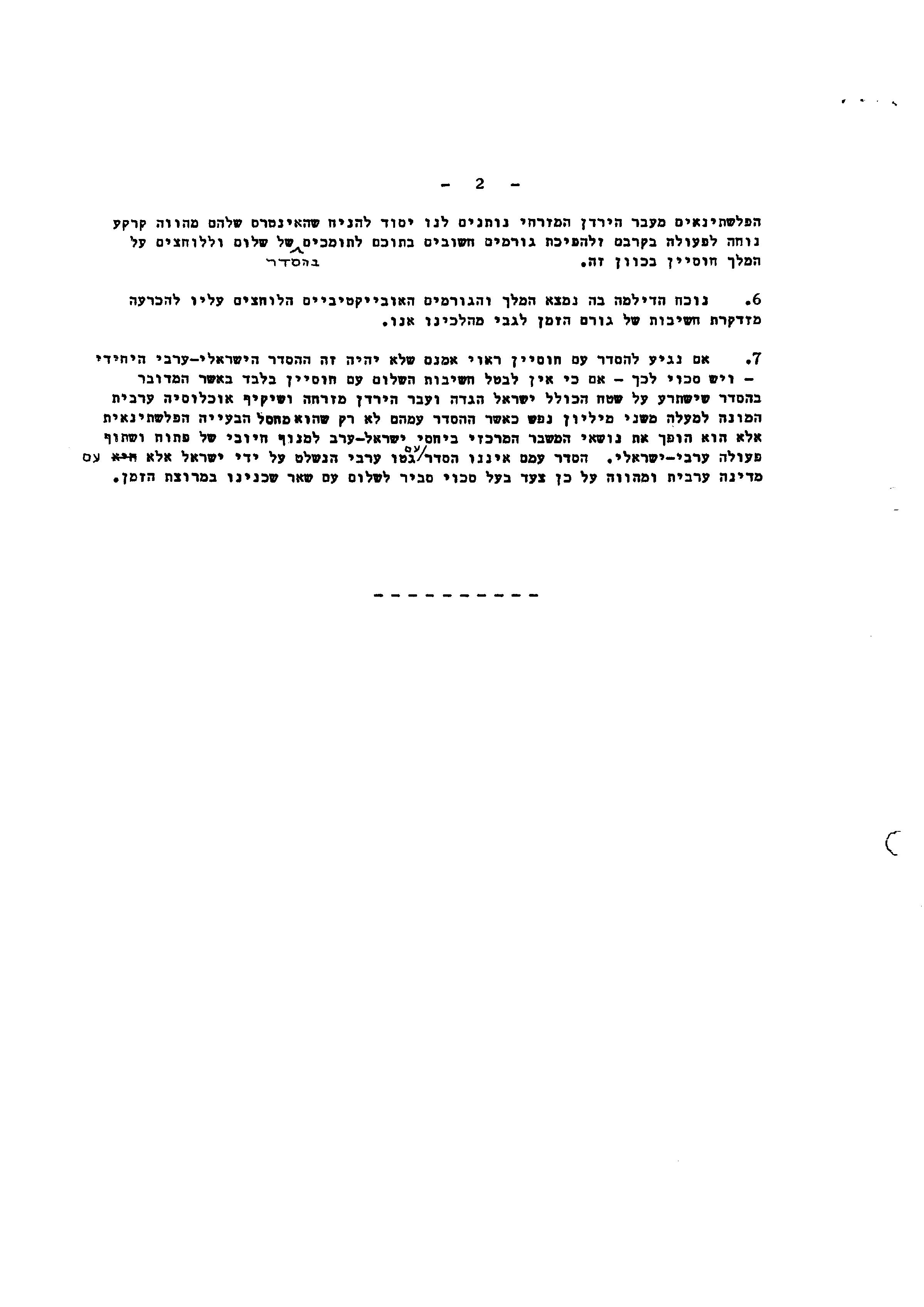 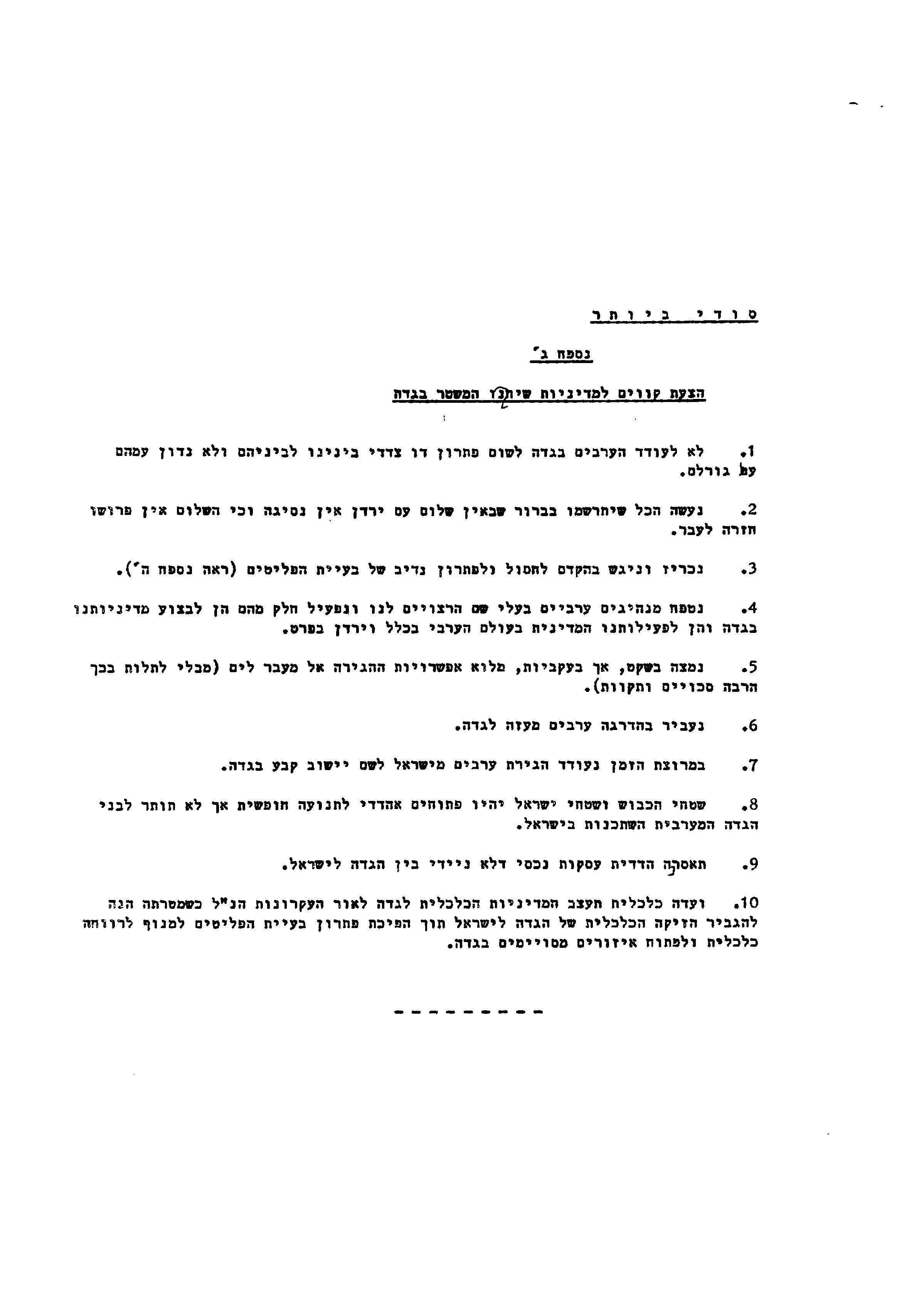 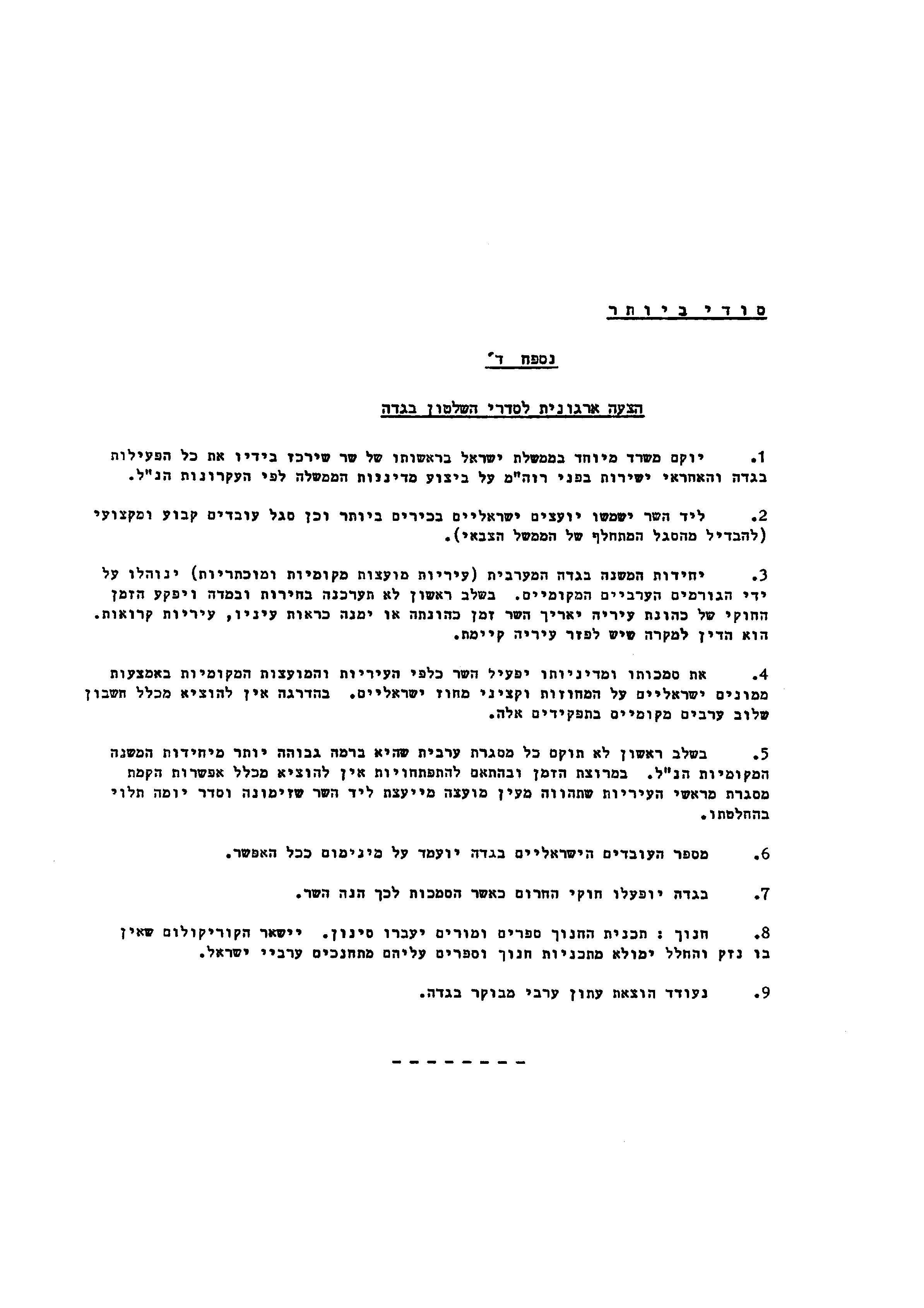 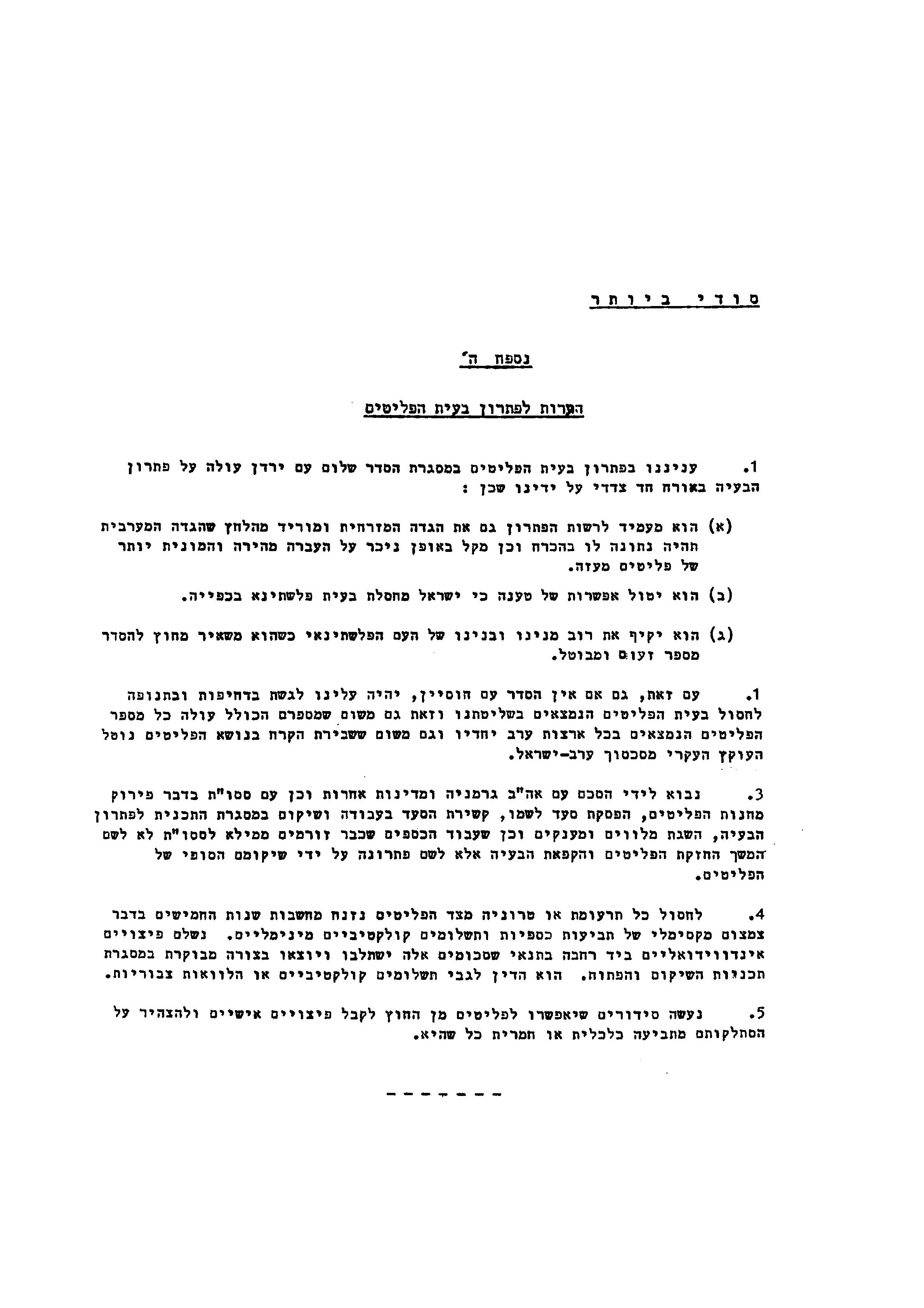 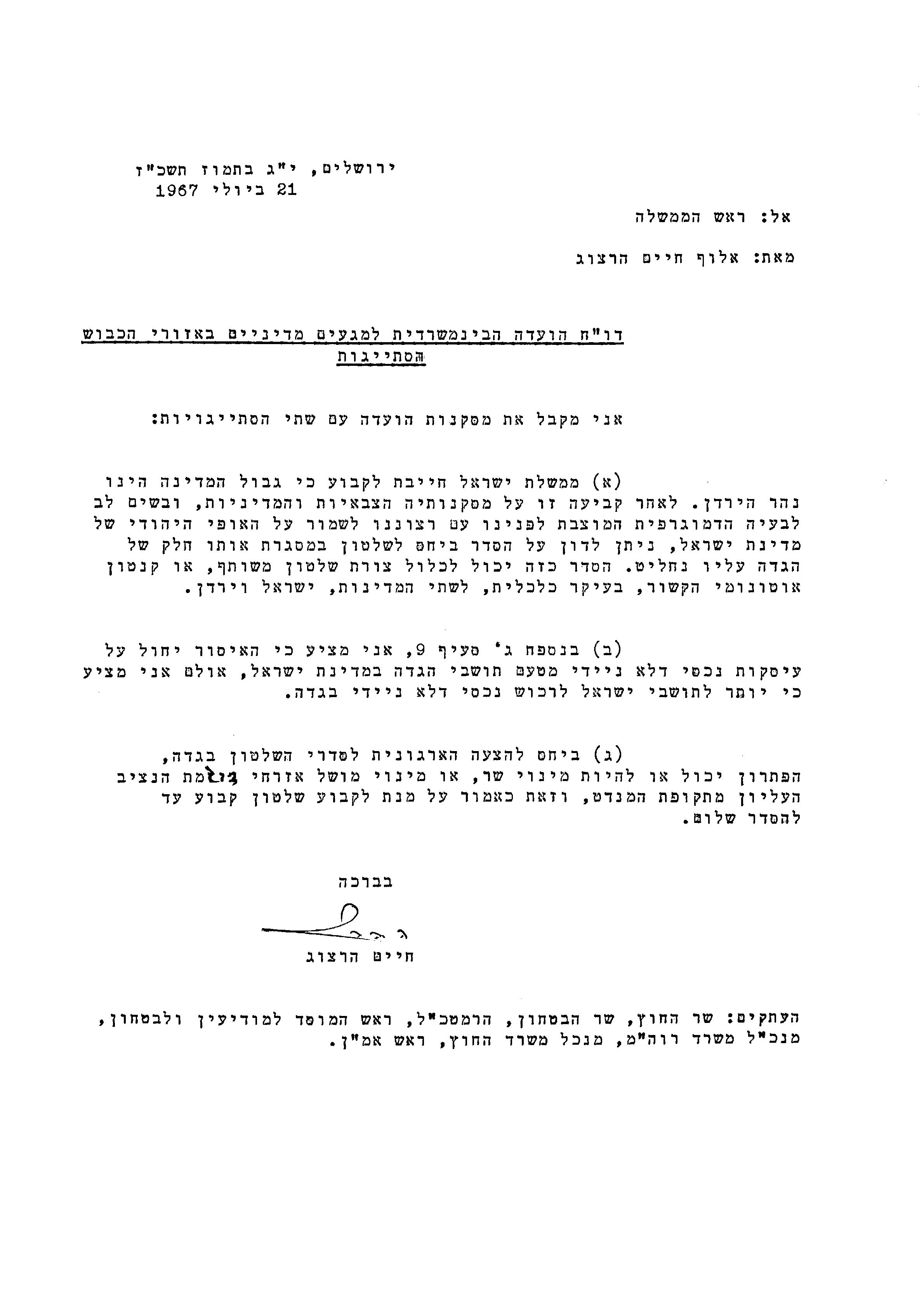 Re: the West Bank, Kingdom of Jordan, Gaza Strip: a suggestion for a solution and policy

The committee’s recommendations highlighted a need for urgent action in two parallel areas: one, intensive diplomatic work to reach a peace agreement with Jordan; the other, until such agreement is reached, managing the West Bank as “a separate administrative and economic unit under direct and exclusive Israeli rule”. Meanwhile, the West Bank will serve as a bargaining chip. Demographic considerations were emphasized in the committee’s recommendations. The West Bank was suggested as space for a solution to the problem of Palestinian refugees, including refugees from the Gaza Strip which – it was suggested – would be annexed to Israel. The future of the West Bank would be decided partly in view of future success in encouraging Arab emigration overseas and absorption of Jewish immigration.

Annex A summarized talks with dozens of Palestinian public leaders, and reviewed main approached they expressed in those early days of Israeli occupation, regarding the future of the West Bank. Annex B dealt with the likelihood of diplomatic agreements with Arab state leaders, particularly with King Hussein of Jordan. In Annex C, the committee suggested guidelines for Israel’s policy in the West Bank and Annex D contained an organizational suggestion for governing the area. The fifth annex reviewed ways to solve the Refugee Problem. Maj. Gen. Chaim Hertzog listed several reservations in a separate document. 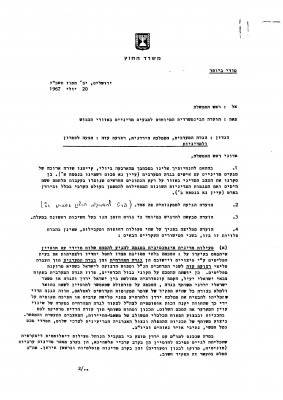 Re: the West Bank, Kingdom of Jordan, Gaza Strip: a suggestion for a solution and policy