For many years, the question of who would investigate complaints of torture during interrogations by the Shin Bet (Israel’s internal security agency) was debated by the Ministry of Justice, the State Attorney’s Office, and the Shin Bet itself. Committees were appointed, reports were written, recommendations were made – and yet, on the ground torture continued and sometimes ended in death. A letter sent by the Minister of Justice to the Head of the Shin Bet in 1992 sheds light on the longstanding debate over the power to investigate Shin Bet interrogators, even though, as the Minister noted in his letter, torture “is beyond dispute.”

In May 1987, the Government of Israel decided to appoint a commission of inquiry with former Supreme Court President Moshe Landau at its helm. The commission was tasked with examining the protocols and interrogation methods used by the security agency in the wake of the ‘Izzat Nafsu Affair. Lieutenant Nafsu was an IDF officer who had been falsely accused of espionage and tortured during interrogation. This event followed another incident involving the Shin Bet that took place three years prior – the Bus 300 Affair, in which Shin Bet agents executed two Palestinians who had hijacked an Israeli bus. The agents were later pardoned by the president.

The events of the first intifada and testimonies regarding numerous cases of ill-treatment of Palestinian detainees put the issue of torture during Shin Bet interrogations back on the public agenda. In particular, the death of Khaled Sheikh ‘Ali at a Shin Bet interrogation facility in Gaza in 1989 elicited fervent public debate. Two years after the release of the Landau Commission’s report, the Ministry of Justice appointed a different commission – this time chaired by Deputy State Attorney, Adv. Rachel Sukar. The commission was tasked with looking into cases of death during interrogation and providing recommendations. The Sukar Commission report remains confidential to this day.

During a Knesset debate on March 14, 2000, MK Dan Meridor spoke about the two commissions, saying: “It turns out that about two years after the Landau Report, at the main interrogation room in Gaza, systematically, they carried on with the system of torture and lies. Justice Landau told me then, in a conversation at his home, when I brought him the Sukar report, ‘I feel betrayed. I have been deceived.’ Those who wish to close their eyes and assume the small cracks in the door would not be opened – good for them. I am not willing to do it.”

The letter posted here, written in July 1992 by Minister of Justice Dan Meridor to Shin Bet Head Ya’akov Perry, summarizes a discussion between the Ministry of Justice and the Shin Bet on the issue of investigating interrogators. It was around then that the function of Inspector for Complaints Against the Israel Security Agency was introduced as a compromise (Israel Security Agency is the official English name for the Shin Bet). However, the new office was far from independent. Between 1992 and 2014, the Inspector was a Shin Bet staffer who had the power to conduct a preliminary inquiry into the complaint and transfer the findings to their superior at the State Attorney’s Office. According to figures from The Public Committee against Torture in Israel, the Inspector received about 1,000 complaints of torture during interrogation in those years. Not a single one resulted in a criminal investigation.

The structure of the office has gone through some changes in recent years, and the Inspector is now a Ministry of Justice staffer. On the ground, however, not much seems to have changed. Just this month, the media reported that the first investigation ever opened against Shin Bet agents had been closed for lack of evidence. The agents in question were suspected of having ordered female soldiers to search the genitalia of a Palestinian woman arrested in 2015. 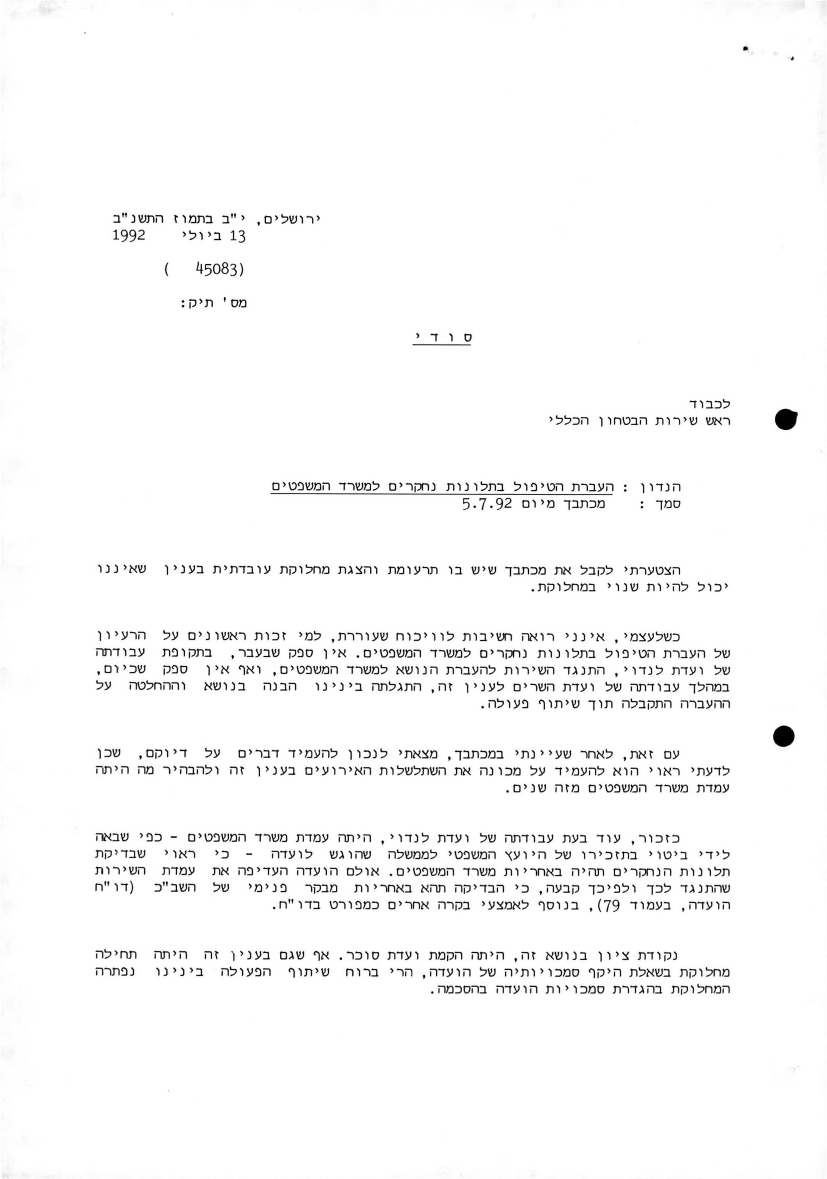 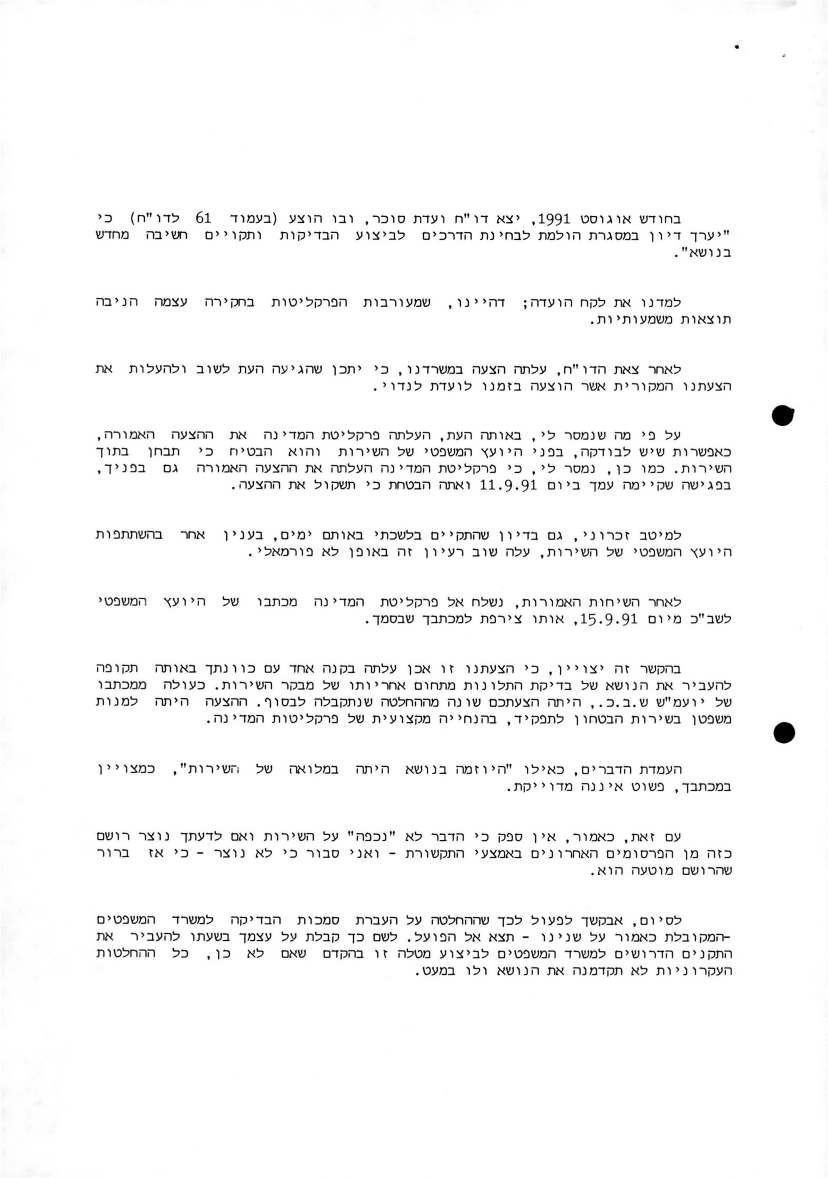 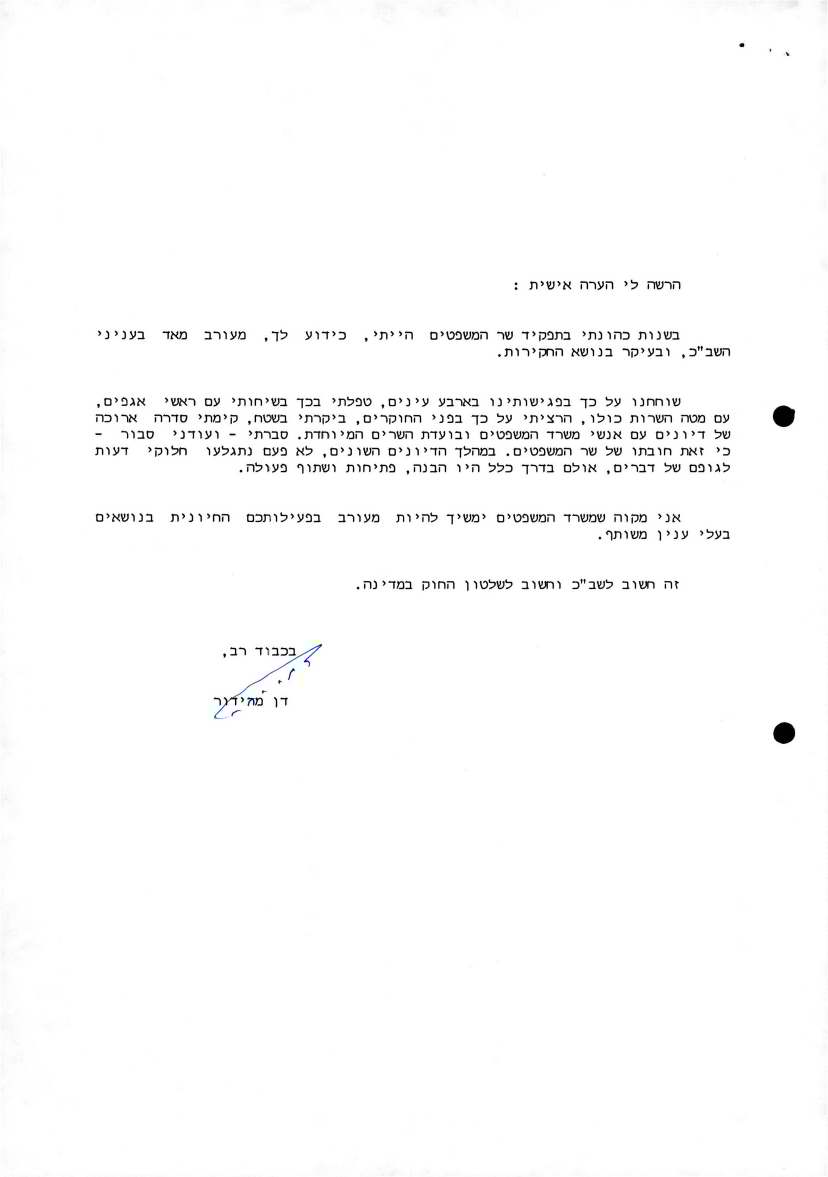 The Minister of Justice to the Head of the Shin Bet

The Justice Minister’s letter to the Head of the Shin Bet came amid a longstanding debate over who would investigate complaints of torture during Shin Bet interrogations. After the Shin Bet insisted on retaining the power to investigate complaints, a limited agreement was reached to transfer the authority to the Ministry of Justice. Eventually, at the end of that year, a new department named the Inspector for Complaints Against the Israel Security Agency was established. Until 2014, the department was part of the Shin Bet and only the Inspector’s supervisor was part of the Ministry of Justice. 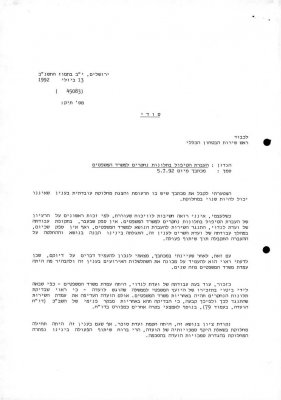