Theodor Meron, the then legal advisor of the Israeli Foreign Office, examined in 1968 the legality of house demolition and deportation policies in the Occupied Territories. The legal opinion he authored was classified “Top Secret” and was recently found in the Israel State Archives. Meron – today one of the world’s most respected jurists – stated in his Opinion the Fourth Geneva Convention applies to Israel’s conduct in the Territories and that it overcomes there the Defence (Emergency) Regulations, which Israel relies upon to this day.

On March 10, 1968, Sergeant Amos Z., an intelligence coordinator of the Gaza police, wrote to his commander about his part in the demolition of three homes in the Zeitoun neighborhood in the south of Gaza City. Sergeant Amos noted that the three homes were located near a site where a landmine was discovered the previous day, and were marked for demolition by the military. “In each of the cases, it was explained, in Arabic, that the home was being blown up because a landmine had been found under the track and not one of them had cooperated in order to uncover who had laid the mine”, wrote Sergeant Amos. The occupants were given a warning, and their belongings were removed, except for the last house: when the police and army arrived there, the house was empty and its contents were gone.

That same day newspapers reported that the UN Human Rights Council had called upon Israel to abandon its policy of demolishing homes belonging to Palestinians in the territories it occupied. Davar newspaper quoted Israeli representative to the committee, Shabtai Rosenne’s statement that “only in exceptional circumstances do Israeli authorities blow-up houses, when it is proven the owners are terrorists.” The Council voted by a majority of 17 to one – Israel – with seven countries abstaining, to send Israel a telegram regarding the policy of house demolition. The US abstained in the vote, and the American delegate read a statement from the US State Department saying that Israel’s actions in the OPT, including East Jerusalem, were subject to the Fourth Geneva Convention. In a Washington DC press conference, the State Department’s spokesperson explained the provisions of the Fourth Geneva Convention that forbid an occupying power to punish civilians in occupied territories for offenses they did not commit or destroy property other than for imperative military needs. Another story that ran in the newspapers that day was that the Hashemite Kingdom of Jordan had filed a complaint with the UN Secretary General regarding the deportation into its territory of former Jerusalem Mayor, Ruhi al-Khatib. Israel’s house demolition and deportation policies, and their conformity to Israel’s obligations under international law, attracted significant international attention.

Following the State Department’s statement and the UN Human Rights Council decision, the legal adviser to the Israeli Ministry of Foreign Affairs sent the ministry’s director general a document entitled: “Geneva Convention: Blasting Homes and Deportation”. In the opinion, which the director general, Gideon Refael, had requested, the legal adviser, Theodor Meron, wrote that the demolition of Palestinians’ homes, which Israel claimed was lawful based on the provisions of Regulation 119 of the Defence (Emergency) Regulations 1945, contravened the provisions of the Fourth Geneva Convention, as did deportation of civilians from the West Bank to Jordan (under Regulation 112 of the Defence (Emergency) Regulations). Meron noted in the opinion that the dominant interpretation of the Convention, whereby: “[T]he occupant has no discretion to choose whether to follow the Fourth Geneva Convention or local law that contradicts the Convention, but must follow the Geneva Convention only” was correct. Accordingly, Meron noted that the legal argument the military advocate corps used to defend the house demolition policy was “unpersuasive”.

The opinion, which was classified “top secret”, also addressed the applicability of the Fourth Geneva Convention to the Occupied Territories, and Israel’s position on the issue. Meron suggested that despite the Israeli policy to “avoid making statements regarding whether or not we are subject to the Fourth Geneva Convention”, Israel should pay attention to the growing pressure on it to implement the Convention in its rule over the OPT. The director general of the Ministry of Foreign Affairs forwarded Meron’s opinion to the director general of the Prime Minister’s Office, Yaakov Herzog, suggesting it may be of interest to him and to the prime minister.

Meron’s opinion was filed and forgotten over the years, and the position that favors obfuscating whether or not the Fourth Geneva Convention applies to the territories occupied by Israel in 1967 continued to lead Israel’s policy. In 2015, Akevot found a copy of Meron’s opinion in the Israel State Archives.  it was submitted to the High Court of Justice as part of a motion made by eight human rights organizations (led by HaMoked: Center for the Defence of the Individual) to have the court hold a further hearing in a petition it dismissed against the legality of using Regulation 119 of the Defence (Emergency) Regulations to demolish and seal the homes of Palestinian suspects. In November 2015, Supreme Court President, Miriam Naor, rejected the motion to hold a further hearing in the matter, but since then, some Supreme Court justices have taken a firm position against the manner in which the house demolition policy has been implemented, and accepted some petitions against house demolitions. 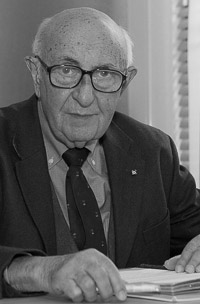 Photo courtesy of ICTY
Judge Theodor Meron in 2011, as President of the International Criminal Tribunal for the former Yugoslavia (ICTY)
Prev Next
Source: Israel State Archives, file A-7454/8 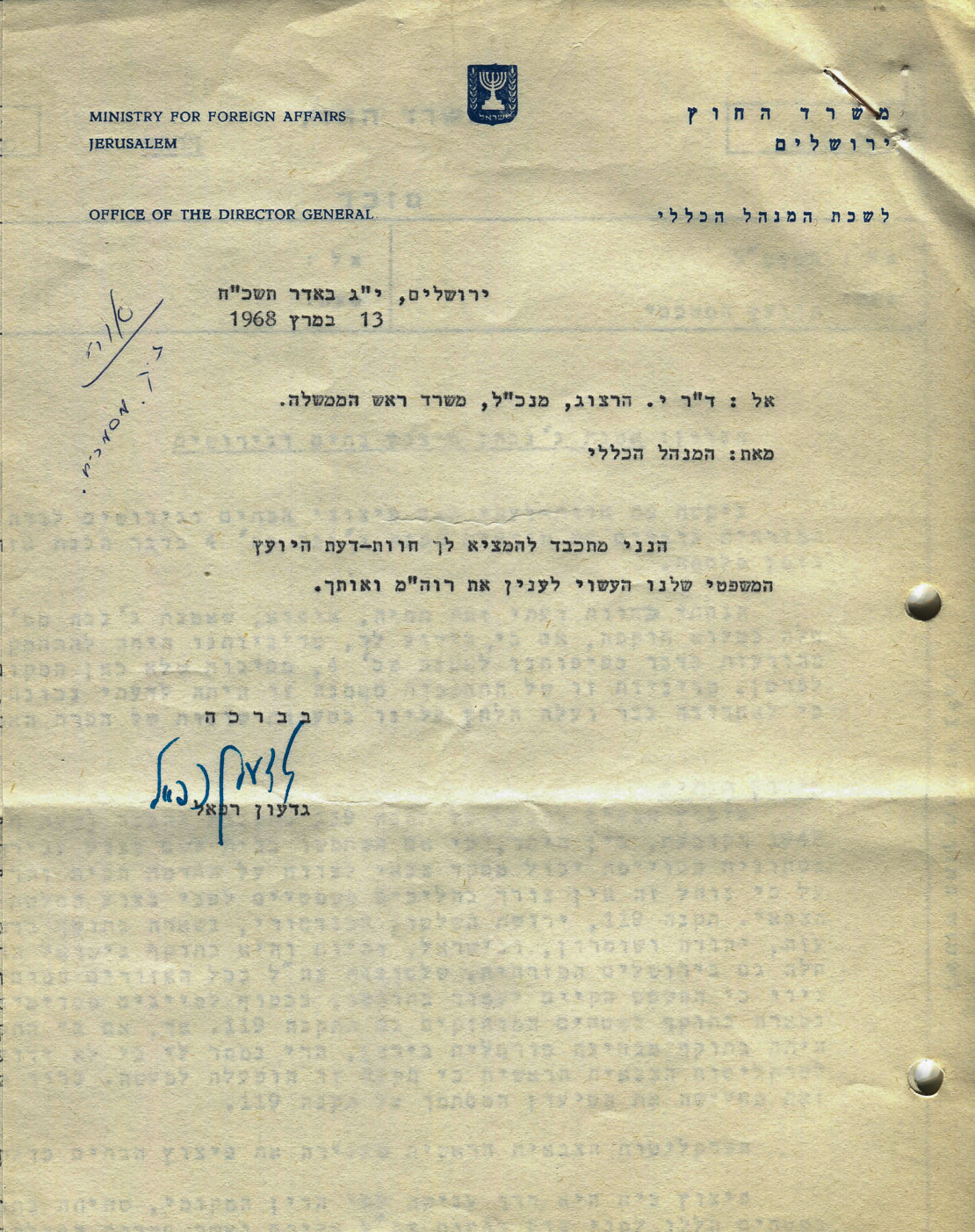 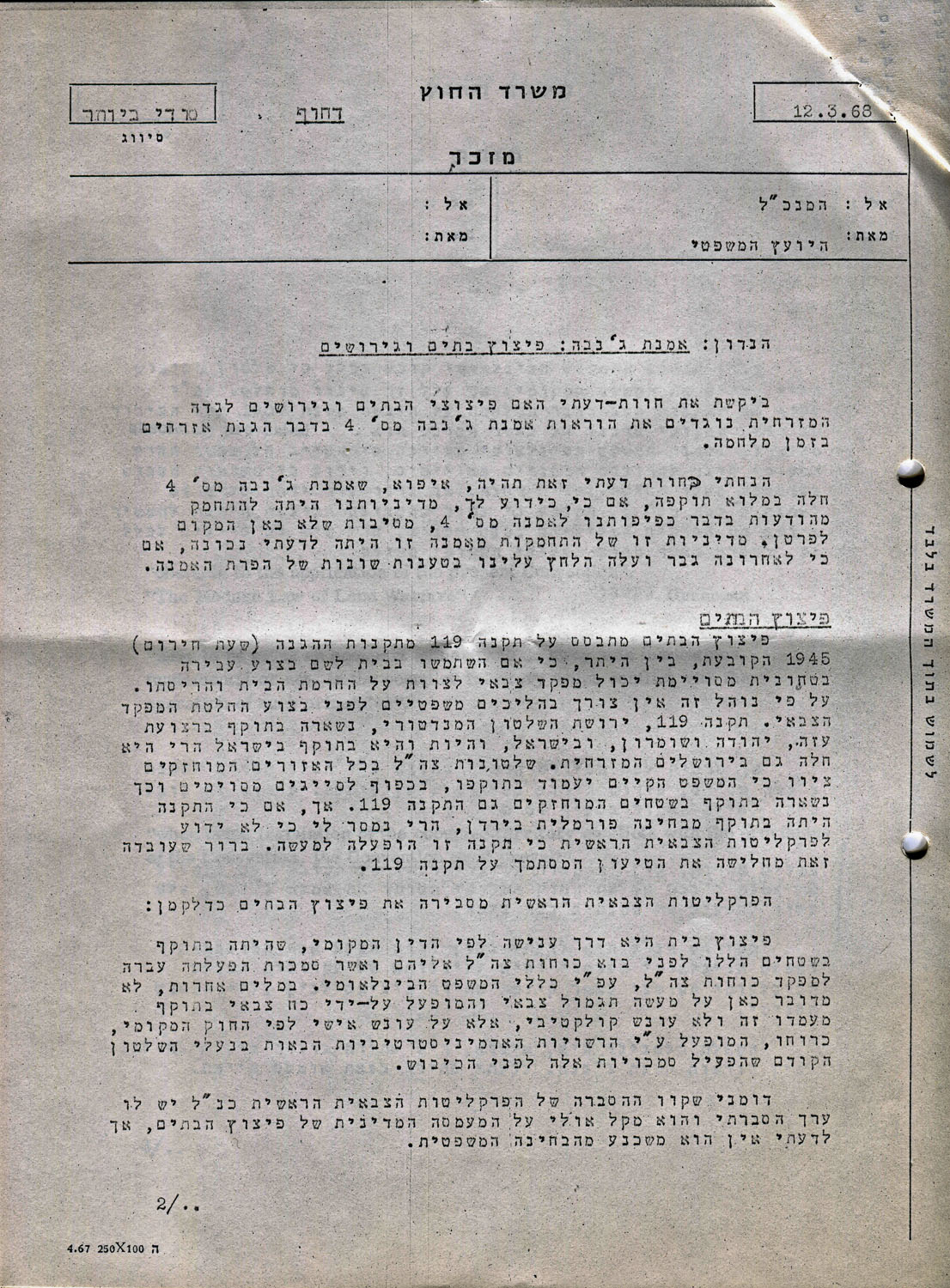 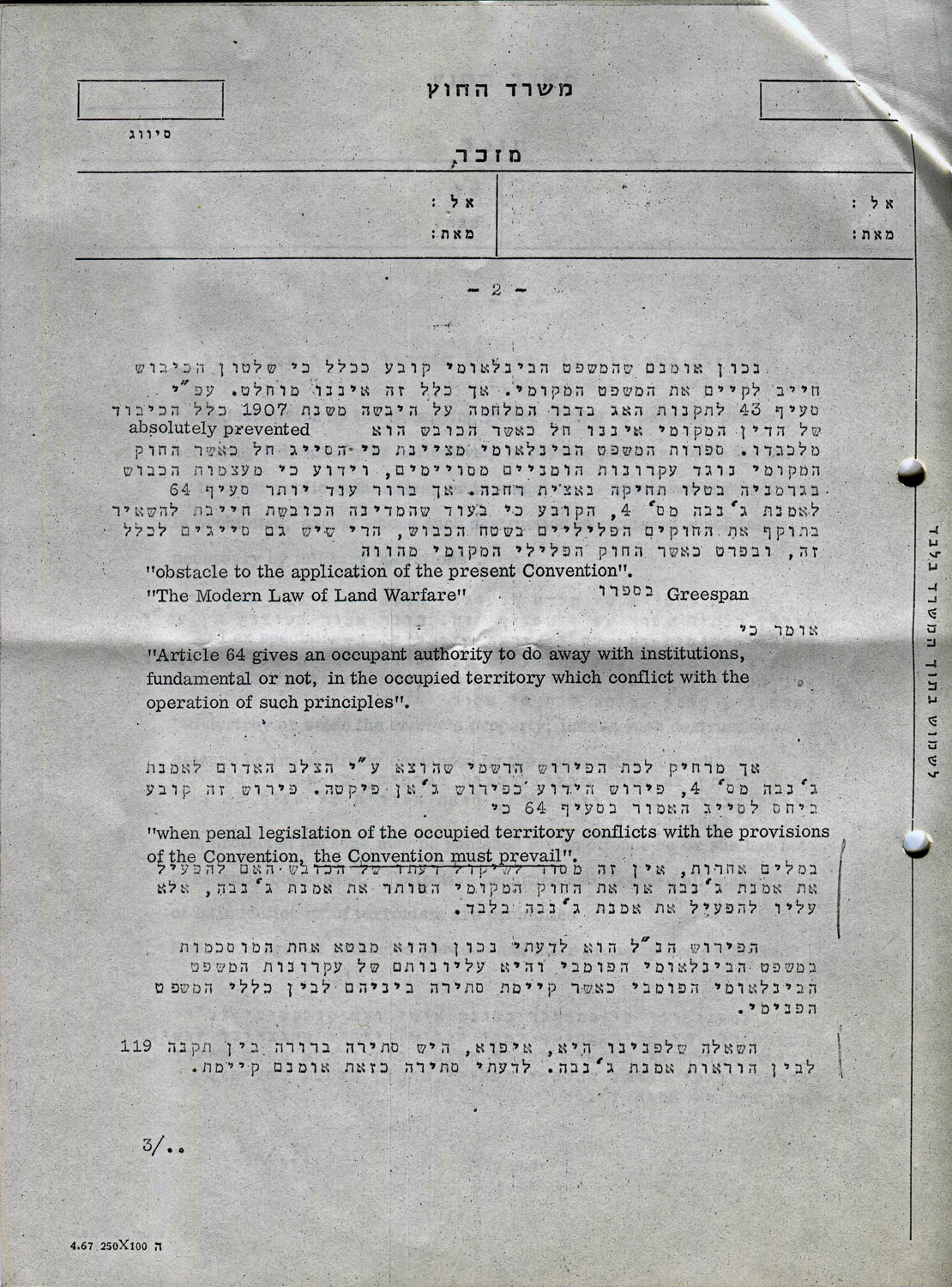 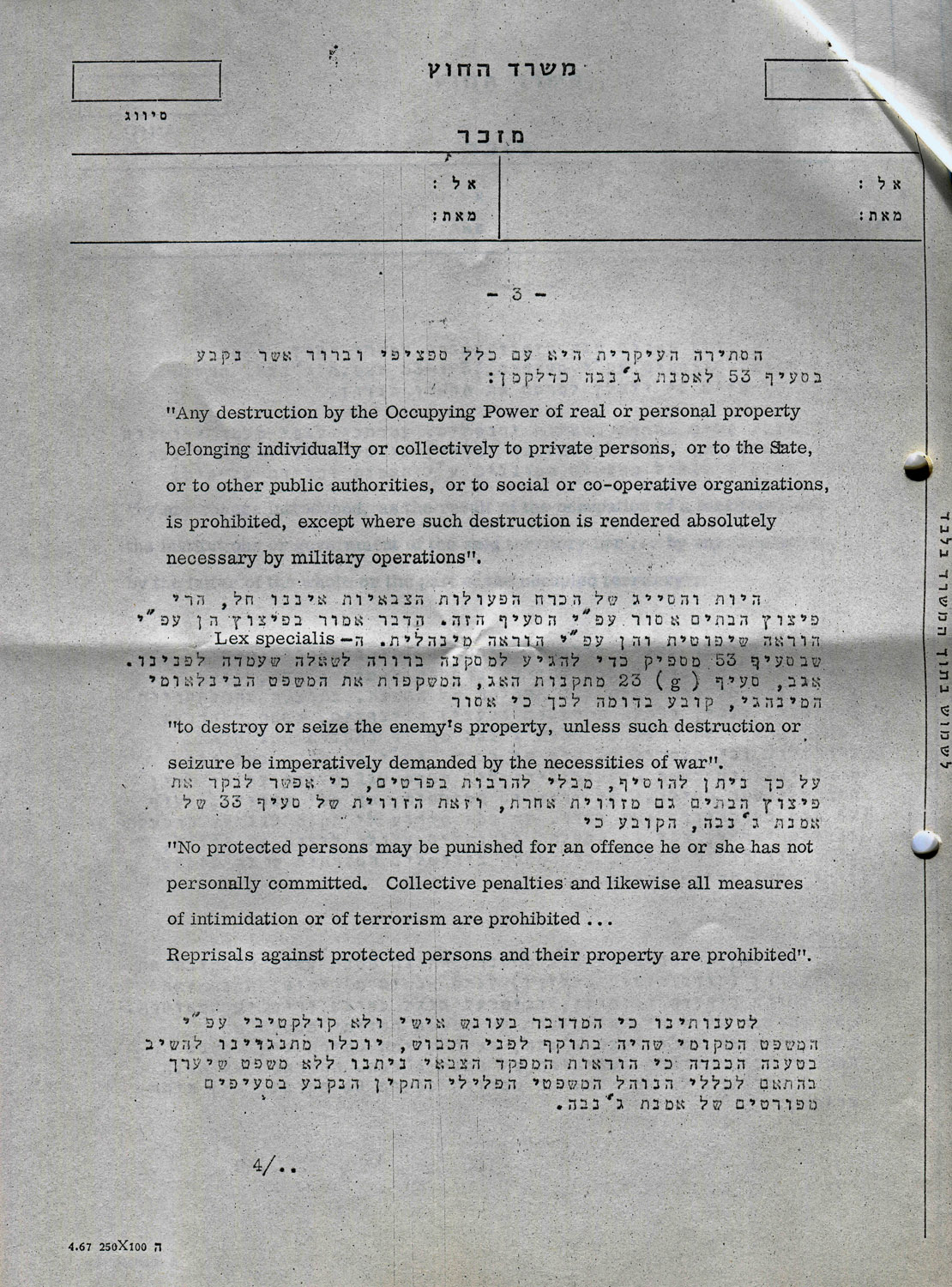 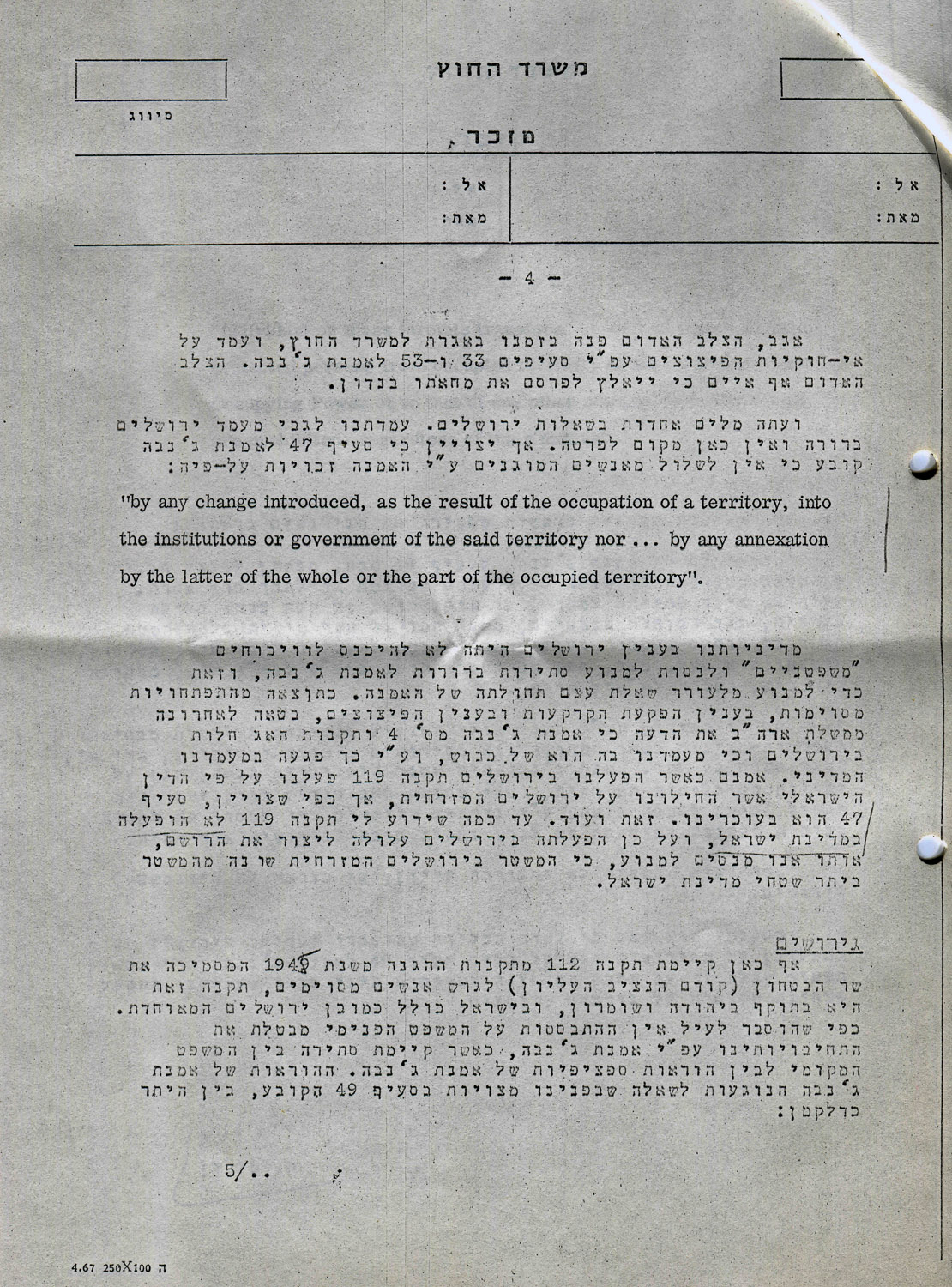 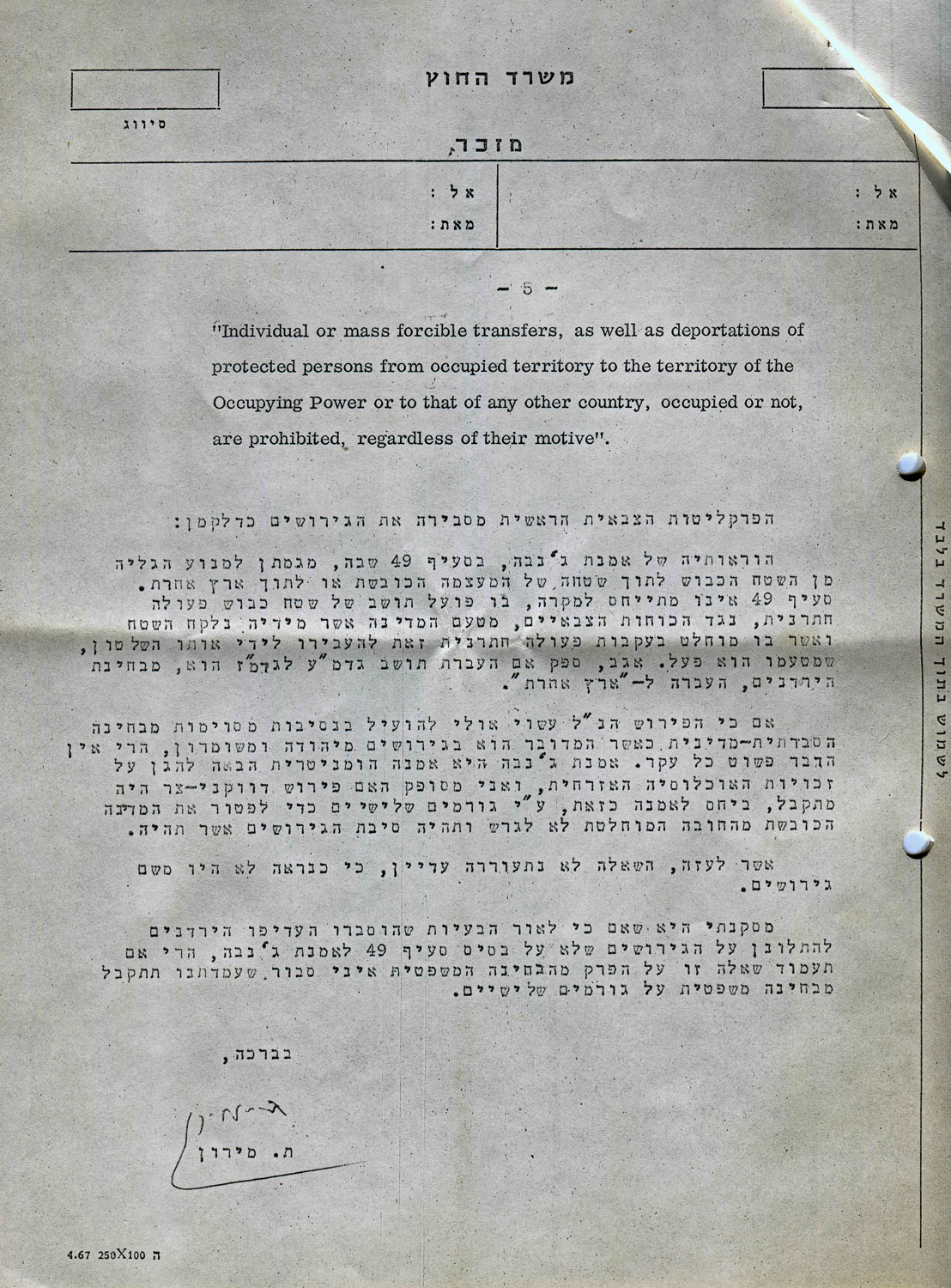 To: Director General. From: Legal Advisor

“You have requested my opinion as to whether the blasting of homes and deportation to the East Bank contravene the Fourth Geneva Convention relative to the Protection of Civilian Persons in Time of War.

My presumption for the purpose of this opinion will, therefore, be that the Fourth Geneva Convention applies in full. However, as you are aware, our policy has been to avoid making statements regarding whether or not we are subject to the Fourth Geneva Convention for reasons which need not be detailed herein. This policy of avoiding the Convention was, in my opinion, correct, although, as a result of various allegations regarding violations of the Convention, pressure on us has mounted recently.” 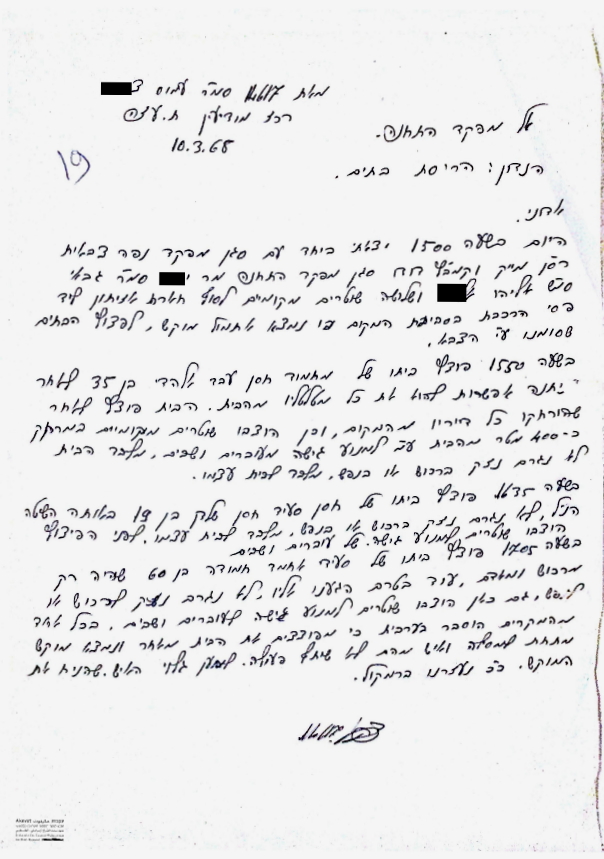 "No damage to persons or property other than the home itself "

“At 5:05 PM, the home of Sa’id Ahmad Hamuda, 60, which had been emptied of all persons or property before we reached it, was blown up. No damage to persons or property was caused. Here too, police officers were stationed to deny access to passerby. In each of the cases, it was explained, in Arabic, that the home was being blown up because a landmine had been found under the track and not one of them had cooperated in order to uncover who had laid the mine. In addition, we used a loudspeaker.” 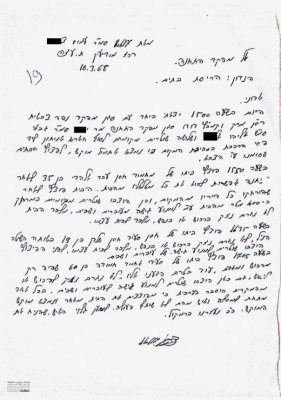