Big Brother in the Teachers’ Lounge: “We have found out from various sources that the above are communists.”

Since Israel’s founding – and to this day – state officials have kept an eye on the employment, opinions, and actions of Arab public school teachers working in Palestinian communities in Israel. Two documents from the early 1950s reveal how closely teachers were watched, and exposes a protocol drafted at the time to ensure Palestinian teachers passed a reliability evaluation by the Arab Affairs Advisor, the military governors, the Ministry of Education, the Shin Bet, and the police.

In the years after Israel’s independence, the security establishment and various state officials closely monitored the public education system in Palestinian communities within Israel. The state devoted considerable attention and resources to this endeavor and often intervened in teacher hiring. During the years of the Military Rule (1948-1966), officials from the military government, the police, and Israel’s internal security agency (Shin Bet) monitored what went on inside schools and teacher’s rooms looking for “undisciplined” teachers – in other words, teachers who voiced opinions that did not fall in line with the positions of the regime, and particularly teachers who criticized Israel and the Military Rule.

In 1950, a set of protocols was introduced to allow the police and the Shin Bet to perform a “reliability evaluation” before teachers were hired by the Ministry of Education. Teachers who had already been hired were also watched, and those who failed to meet state expectations were fired. For example, in 1952 more than 40 (out of 685) Palestinian teachers were fired for “abusing the opportunity they had been given to educate and mold the next generations,” as explained at a meeting of the military governors in October of that year. Meanwhile, Palestinian citizens of Israel who were favored by the Military Rule authorities were promoted within the education system regardless of their professional abilities. The screening of teaching candidates affected primarily those who exhibited communist and/or nationalistic “tendencies.”

The practice continued in various forms for many years, as revealed in several investigative media reports on the Shin Bet’s involvement in the hiring of Palestinian education workers in Israel. In 2001, an investigative report by Haaretz revealed that the Deputy Director for Arab Education was, in fact, a Shin Bet official who had held the position for about a decade. The report also revealed that the same person served as Chairman of the Appointments Committee in the Arab education system, meaning the hiring of every teacher, school principal, or supervisor required his approval, which was given based on a security report provided by the Shin Bet. This is how the Shin Bet continued to keep a close watch on Palestinian teachers years after the abolition of the Military Rule.

In September 2004, Adalah – The Legal Center for Arab Minority Rights in Israel -together with the Union of Parents of Arab Students in Israel, filed a High Court petition demanding that the Shin Bet end its involvement in the hiring process of teachers, principals, and supervisors in the Arab education system, whether through the Deputy Director for Arab Education or by any other means. Following the petition, the state announced that the Shin Bet position of Deputy Director for Arab Education at the Ministry of Education would be eliminated, and the petition was dropped. However, it is not at all certain that the Shin Bet’s involvement in education in Palestinian communities has in fact ended. In February 2020, a petition filed by the Movement for Freedom of Information (Hebrew) revealed that Ministry of Education Director-General Shmuel Abuab met with Shin Bet officials in his office in November 2019 to discuss “Arab society.” 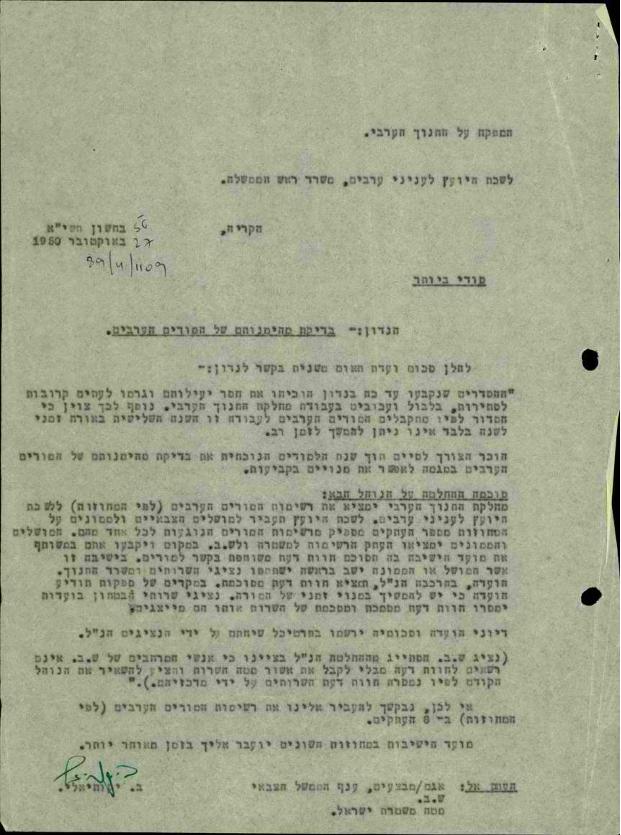 Letter from the Supervisor of Arab Education to Arab Affairs Advisor

In October 1950, a decision was made to have the Department for Arab Education provide lists of teachers who were in line for permanent positions to the Office of the Arab Affairs Advisor. The office would then send the lists to the military governors, the district directors, the Shin Bet, and the police. In a letter to the Arab Affairs Advisor, the Supervisor of Arab Education explains that once each of these agencies sent in their evaluation of specific teachers, a special meeting would be called to “finalize a joint evaluation of the teachers,” in order to “enable their permanent appointment.” 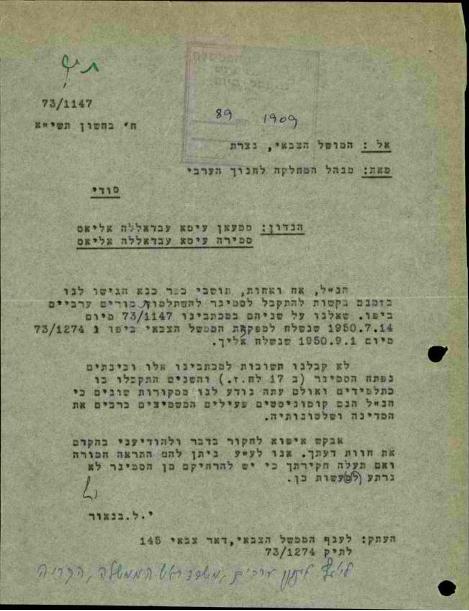 Letter of the Director for Arab Education to Nazareth Military Governor

Keeping tabs on the political views of teachers and teacher candidates was one form of state monitoring, as exemplified in this letter from the Director for Arab Education at the time, Yehuda Leib Benor. In the letter, Benor sounds the alarm over a Palestinian brother and sister who had been accepted into the Arab Teachers Seminary in Jaffa despite being “active communists who publicly malign the state and its authorities.” The letter further indicates that Military Rule authorities had not responded to inquiries sent to them by the Ministry of Education about the two teachers. 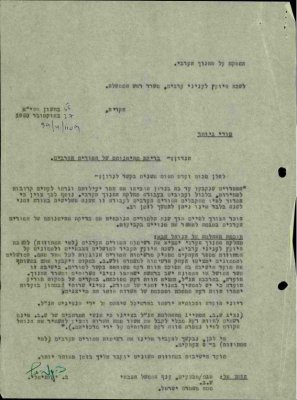 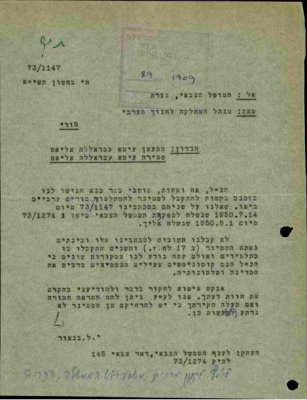 Director for Arab Education at the Ministry of Education to Nazareth Military Governor
October 19, 1950