Israel’s relationship with its Palestinian citizens has been on the agenda for many years. In 1973, Shmuel Toledano, who served as Arab affairs advisor under three prime ministers, penned a report analyzing this relationship and offering projections into the future. “The cumulative baggage of bitterness, alienation and disappointment with the state on the one hand and Jewish society on the other have reached, in my estimation, alarming proportions, with time working fervently against us,” Toledano wrote. Still, rather than suggest ways to improve the relationship, the report shifts the blame back to Israel’s Palestinian citizens: “Most of them fall into the arms of the Communist Party, a few into the arms of terrorist organizations.”

Shmuel Toledano served as Arab affairs advisor under three prime ministers: Levy Eshkol, Golda Meir, and Yitzhak Rabin. On March 8, 1973, Toledano submitted a 12-page report entitled “Israeli Arabs – Situation Assessment and Projection” to Prime Minister Meir. In his report, the advisor provided a summary of where Palestinian citizens of Israel stood in terms of education, employment, politics and more, and made projections.

Whether the document was prepared at Meir’s request is unknown, but on July 29, 1973, the topic of Israel’s Palestinian citizens was discussed in a government plenum meeting with Advisor Toledano in attendance. The meeting transcripts remain classified except for a single page that is available for public access. The page was found in the same Israel State Archive (ISA) file as Toledano’s report. “I propose, to the ministers’ attention, to take to heart what Toledano has said,” Meir tells members of her cabinet. “We need not position ourselves as if we have done who knows what. We have done great things, [but] not everything, not even for the Jews. Thank you.”

Throughout the report Toledano points to the great difficulties Palestinian citizens have integrating into Israel’s political, economic, and social life. “The coming years will see many thousands of university and high-school graduates with a strong national consciousness looking for adequate work in government ministries and public institutions and not finding it,” Toledano wrote, adding: “The inclination shown by government ministries and public institutions to hire Arabs or assimilate them in institutions at the decision-making level is not expected to undergo a material change.”

Toledano notes that the roughly 60,000 young Palestinian job seekers face many difficulties integrating into and adjusting to Jewish society, where “naturally, the term ‘Arab’ is viewed negatively and sometimes with repulsion.”  Toledano noted he did not expect, “material changes in the conduct of the Jewish population and its approach towards Arabs in mixed cities and employment hubs.” The difficulties Palestinian citizens faced gaining employment in various state institutions were repeated in the private sector as well. “Certainly no change is expected in the inclination of private companies and individuals to hire Arabs for their businesses.”

Toledano said Israel was losing touch with young Arabs, partly because “the values and ideology of equality and coexistence we are trying to disseminate among them no longer speak to them and appear substance-less as they crumble in the face of everyday reality.”

Toledano explained to Meir that he had attempted to be more realistic than pessimistic in his assessment and suggested intensive, wide-scale public advocacy “to change the Arab’s image among the Jewish population.” 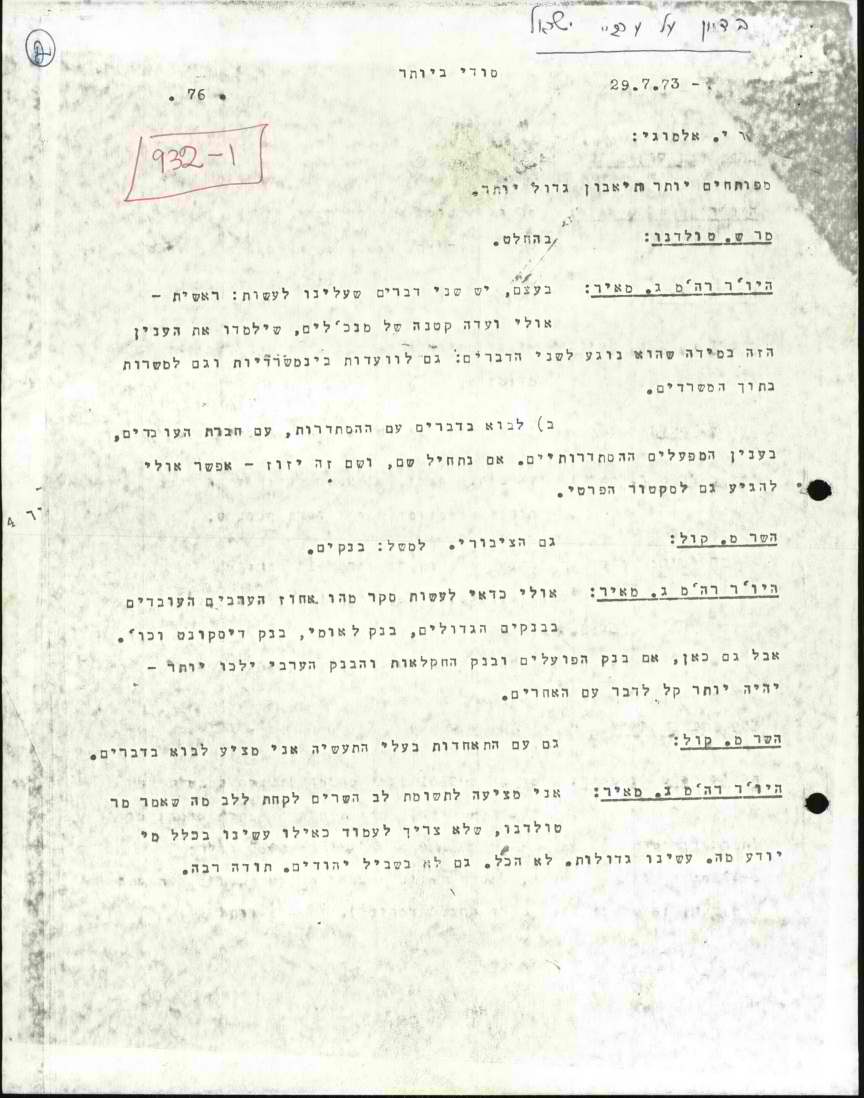 Nearly five months after the report’s submission to the prime minister, it was discussed or at least mentioned in a government meeting. The transcripts of the meeting remain classified, except one page that is available for public access. The available material shows that Prime Minister Meir took Toledano’s report seriously and that the government did discuss it. Meir took a rather sober approach to Toledano’s findings: We have done a lot, she told her cabinet, but not enough to pat ourselves on the back. 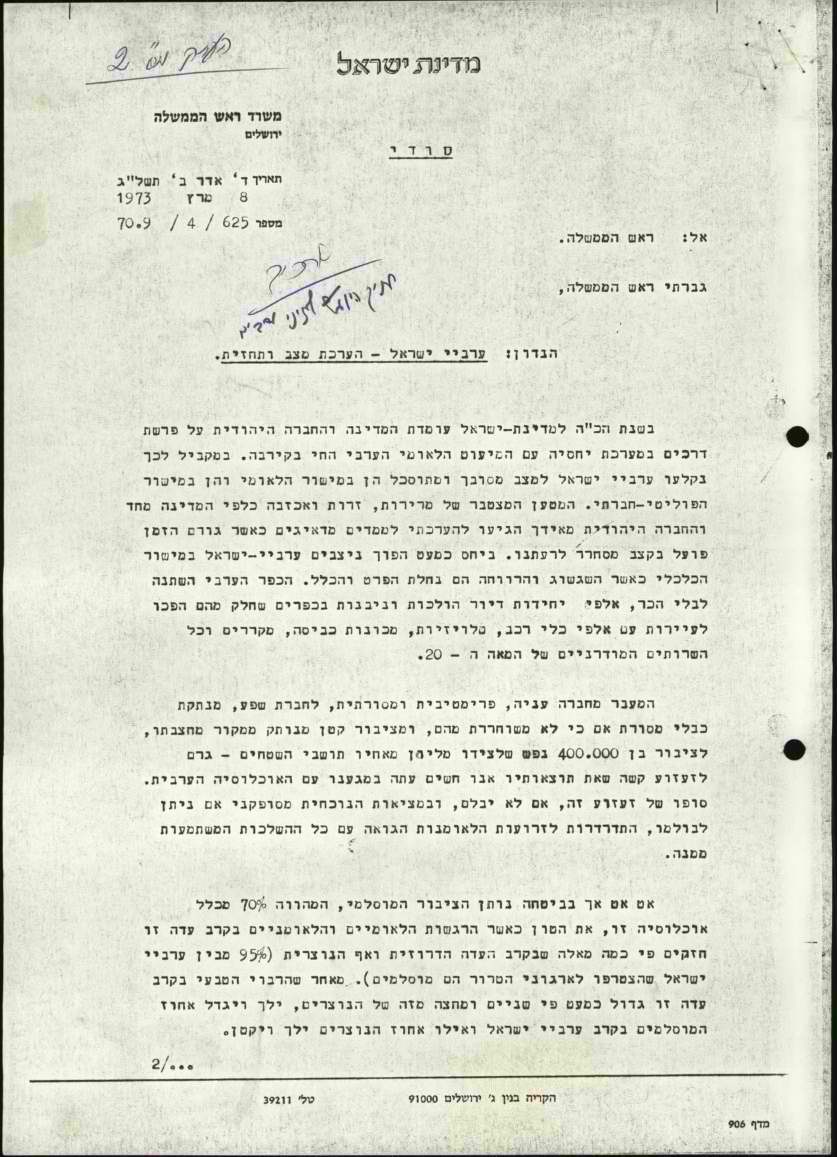 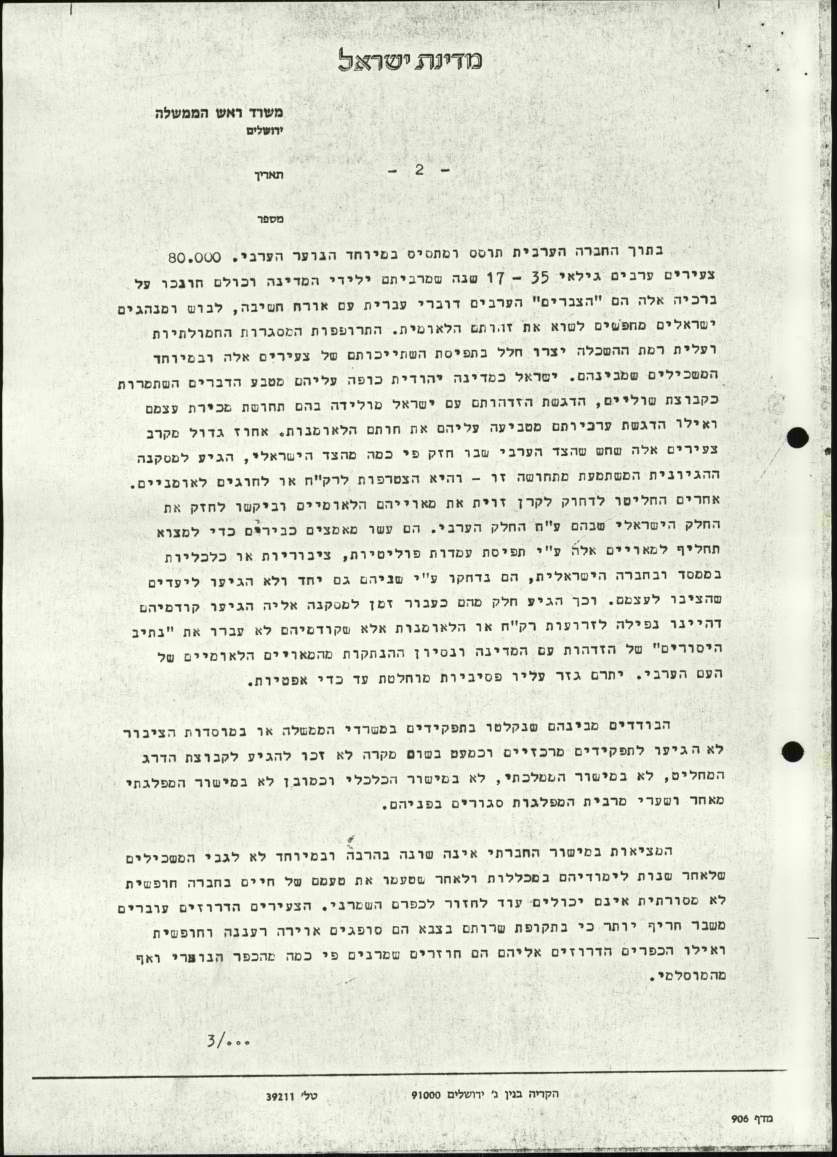 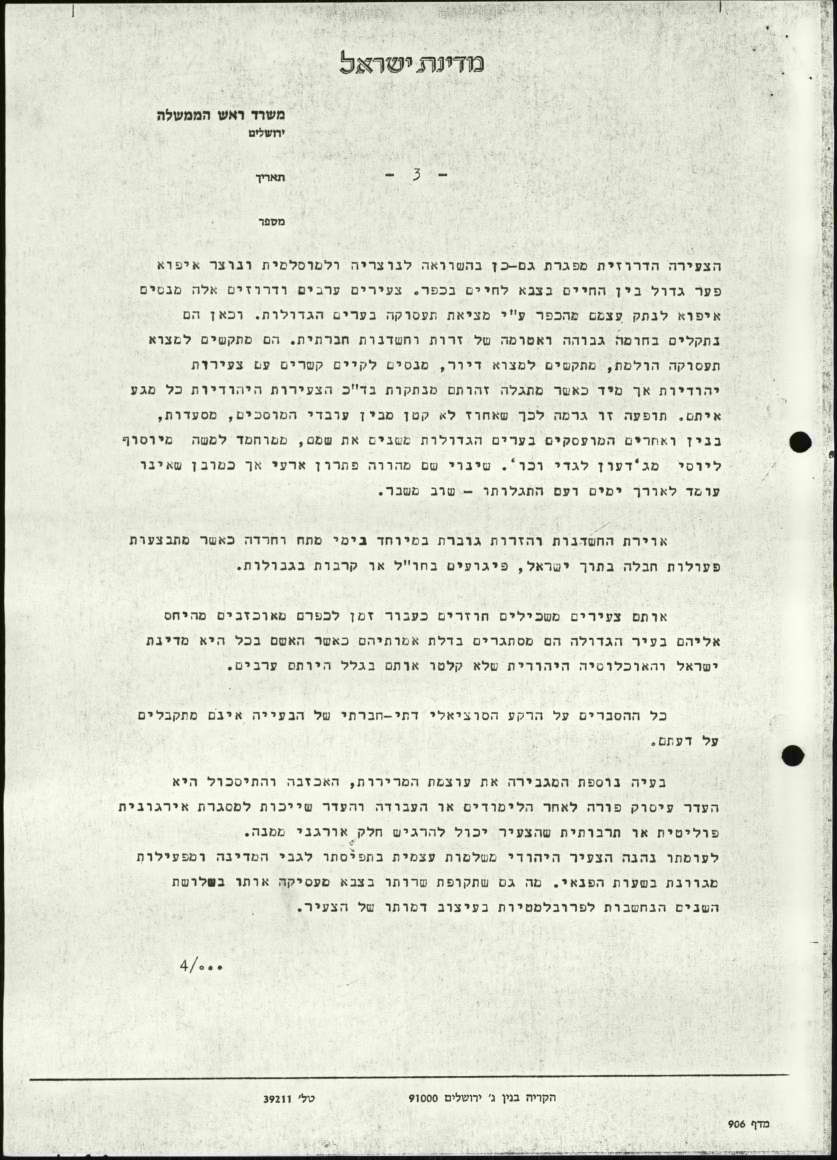 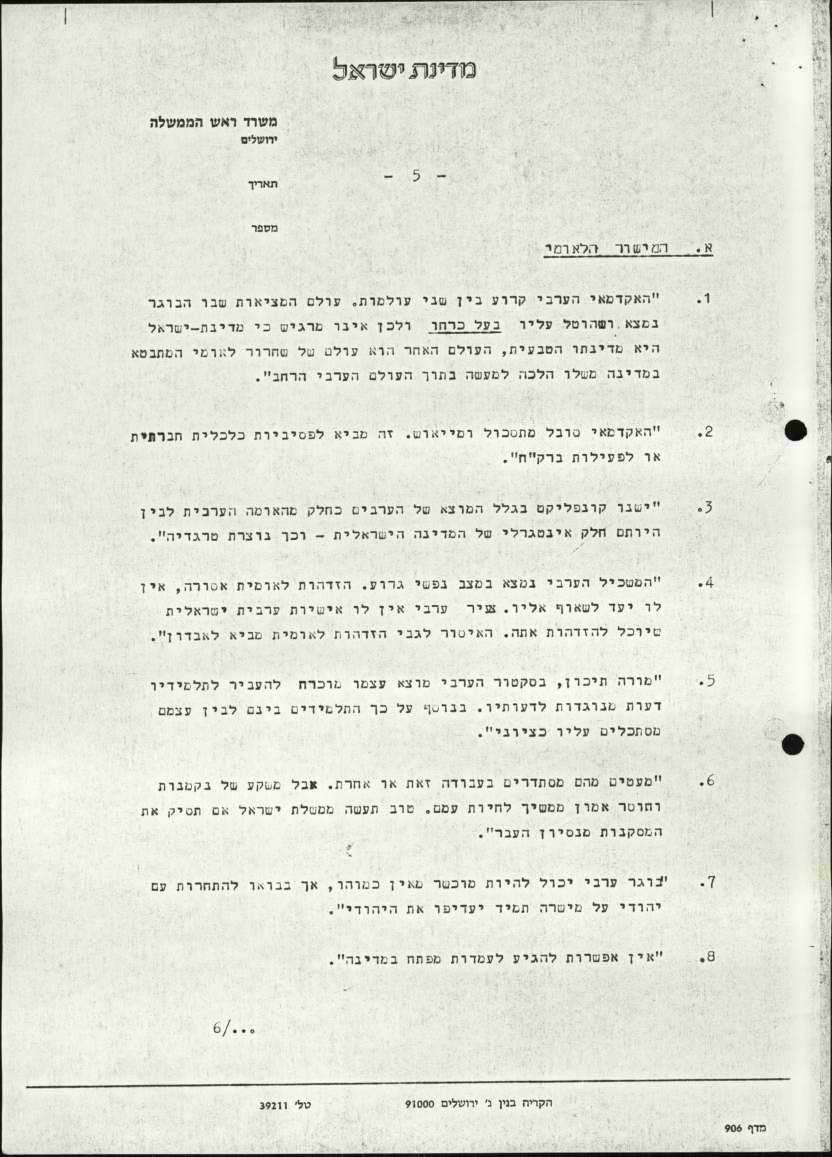 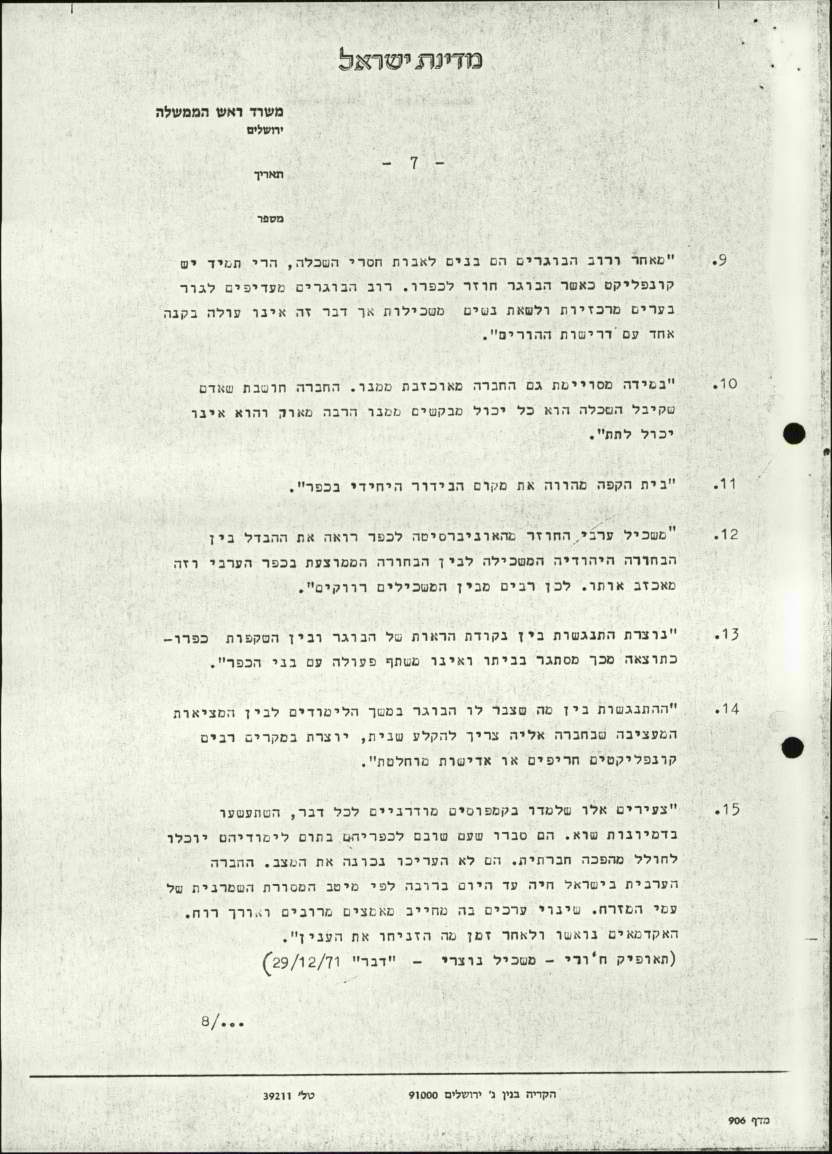 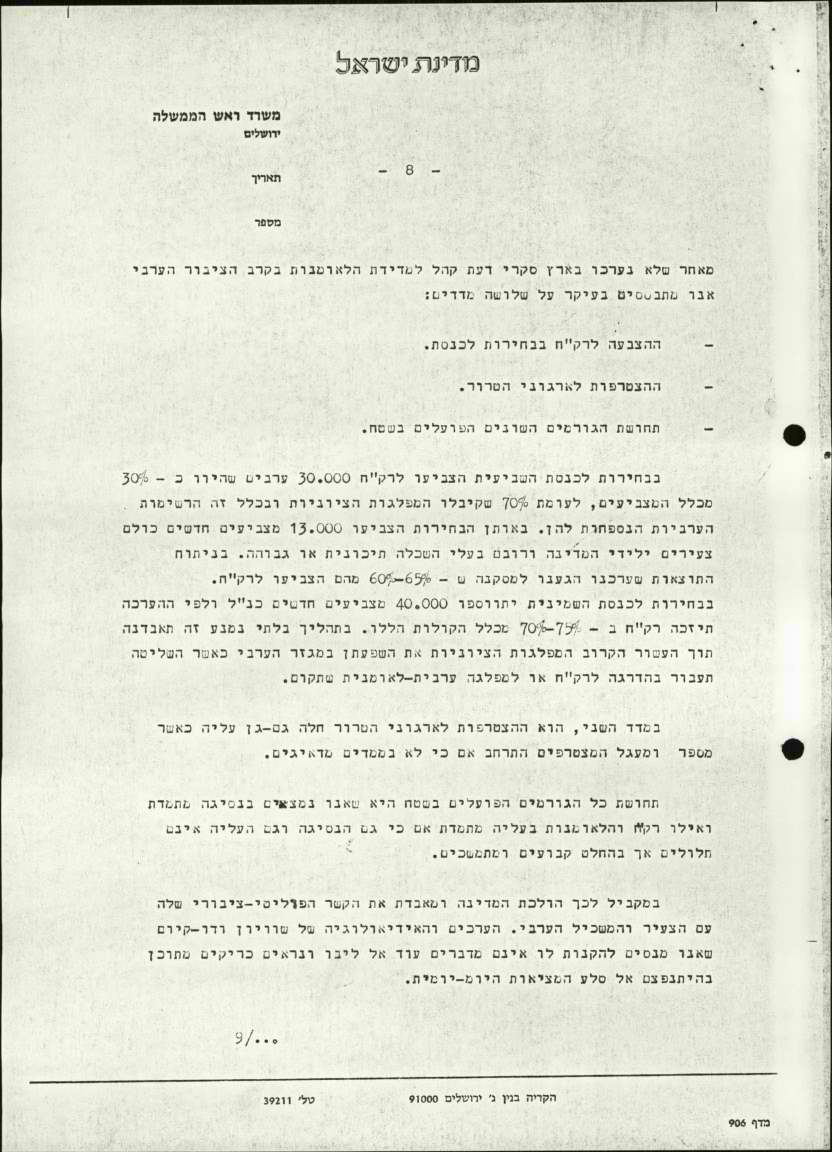 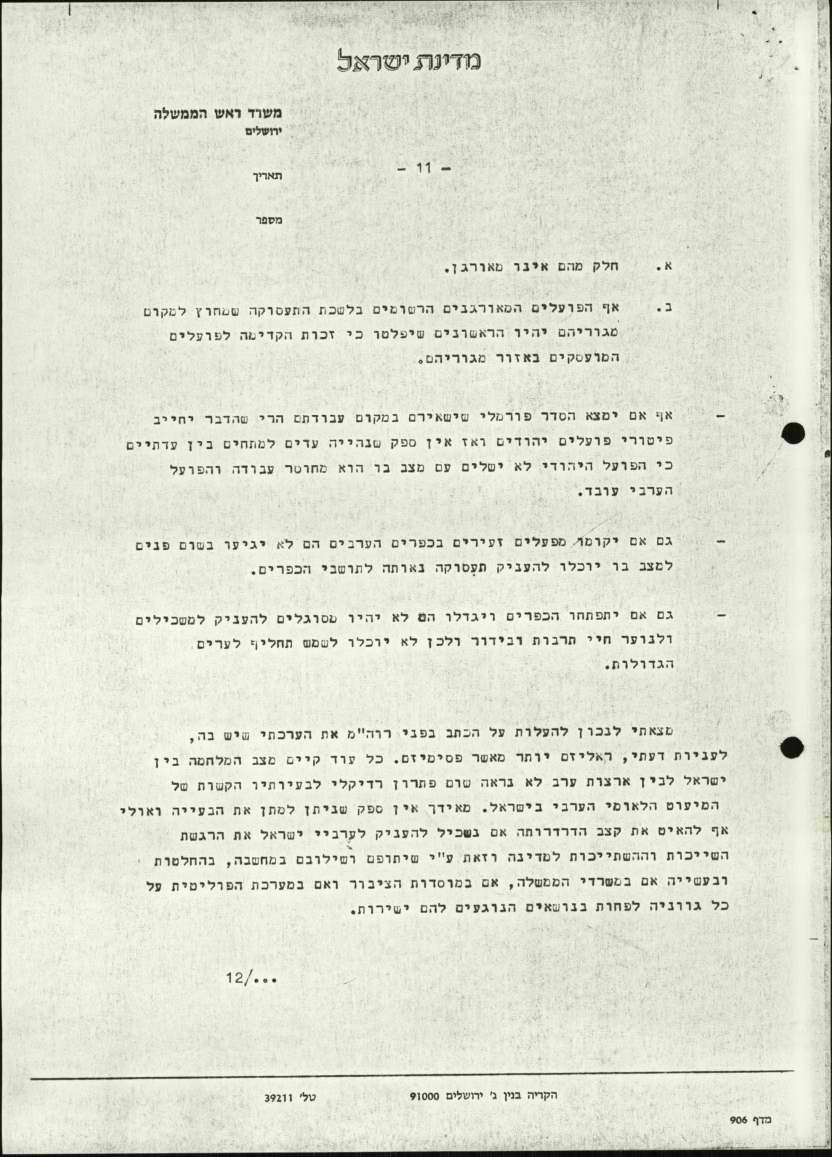 “In Israel’s 25th year, the country, and Jewish society, stand at a crossroads in terms of their relationship with the Arab national minority living among it.” This is the opening statement in the report Arab Affairs Advisor Toledano submitted to Prime Minister Golda Meir. The statement remains relevant to this day, partly because while the report does strive to understand the positions, difficulties, and mindset of Israel’s Palestinian citizens, it fails to make any serious suggestions as to how to change the situation, other than public advocacy among Jewish society. 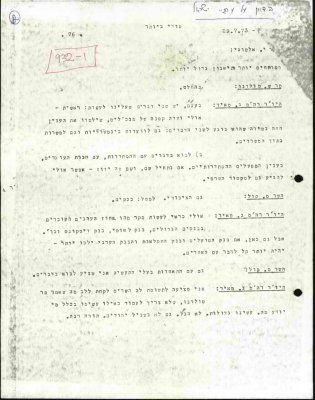 Page from transcripts of government meeting held on July 29, 1973 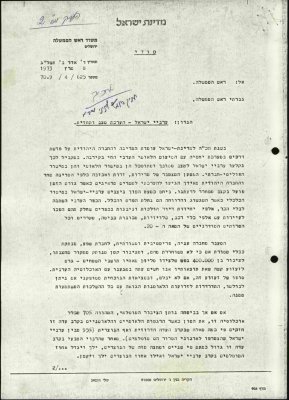