A 1967 memo by Theodor Meron reveals: Israeli government’s Ministerial Committee on Security approved deportation of political leaders from the Occupied Territories in spite of the Military Advocate General Meir Shamgar’s warning this was a violation of the Fourth Geneva Convention.

On December 20, 1967 a Ramallah lawyer, Ibrahim Baqer, was deported to Jordan. Davar newspaper reported he was deported for “advocating and practicing non-cooperation with Israeli authorities.” (1) . Press reports of the deportation prompted a telephone call from Theodor Meron, the legal advisor of the Ministry of Foreign Affairs, to IDF Military Advocate General, Col. Meir Shamgar. Meron said the deportation was a “grave violation” of article 49(1) of the Fourth Geneva Convention. In a memo he later wrote to the ministry’s director general, Meron quoted the section in full. Meron was also concerned over possible diplomatic troubles resulting from the publicity given to the deportation. Shamgar responded that he had warned the Ministerial Committee on Security that deportation of Palestinian residents from the Occupied Territories was a breach of the Geneva Convention, but the committee decided to approve the policy nevertheless, despite his opinion.

Utilizing Regulation 112 of the Emergency (Defence) Regulation 1945, Israel started deporting Palestinian public leaders for their political activity three months earlier, on September 21, 1967. (2) . By 1992, when systemic use of deportation was halted, Israel had deported at least 1,522 people puesuant to Regulation 112. (3) 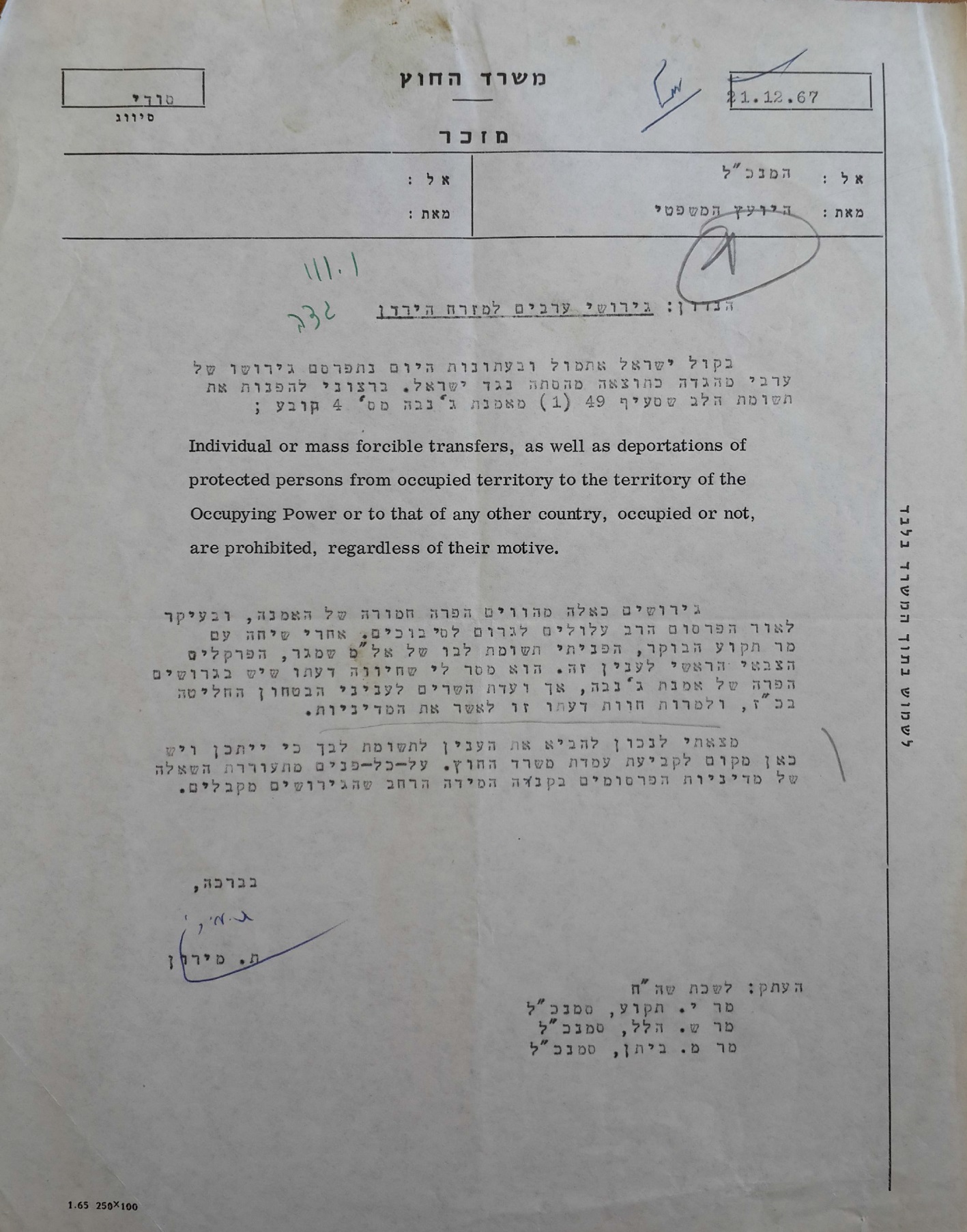 Re: Deportation of Arabs to East Jordan

Yesterday the Israel Broadcasting Authority and today the newspapers reported about the deportation of an Arab from the West Bank as a result of incitement against Israel. I should like to call attention to the fact that Article 49(1) of the Geneva Convention No. 4 stipulates as follows:

Individual or mass forcible transfers, as well as deportations of protected persons from occupied territory to the territory of the Occupying Power or to that of any other country, occupied or not, are prohibited, regardless of their motive.

Such deportations constitute a grave breach of the Convention, and, particularly given the wide publicity, may lead to complications. Following a conversation with Mr. Tekoah this morning, I called the attention of Col. Shamgar, the military advocate general, to the issue. He told me that he has stated his opinion that the deportations constitute a breach of the Geneva Convention, but that the Ministerial Committee on Security has nevertheless decided to approve the policy, despite his opinion.

I have found it necessary to bring this matter to your attention, as there may be a need to determine the position of the Ministry of Foreign Affairs. At any rate, there is the question of the policy of giving the deportations wide publicity.
Sincerely
T. Meron 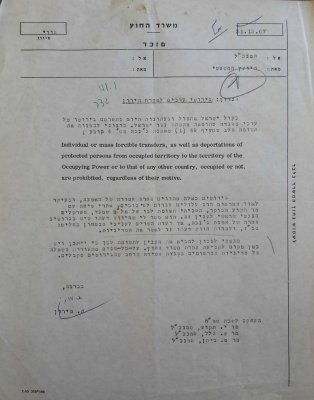